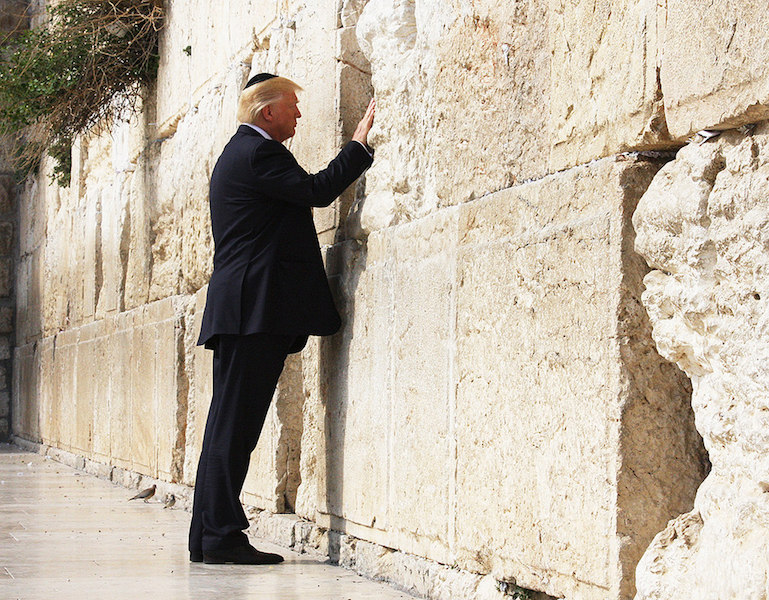 Whether he realizes it or not, President Trump has just made any resolution between Israel and Palestine significantly less likely. Yesterday, the president announced that his administration was recognizing Jerusalem as Israel’s capital and would eventually move the US embassy to this contested city, upending decades of American policy and triggering greater unrest in the region.

In the president’s speech, Trump said this decision marked “the beginning of a new approach to conflict between Israel and the Palestinians,” adding that this “long overdue” tack would “advance” the region’s protracted peace process. However, a large contingent of critics, including world leaders, past presidents, regional experts, and the Pope, sharply disagree.

Despite Trump’s characterization, the decision to recognize Jerusalem as Israel’s capital does not represent a “fresh” approach to the Israeli-Palestinian conflict, but rather a fulfillment of a promise the president made to conservative Jewish and evangelical voters. “While it may have some domestic political or cultural appeal, from the standpoint of US interests, the peace process, and regional stability, moving the embassy would come at an exceptionally high cost with little or no benefit,” writes Khaled Elgindy, a fellow at the Brookings’ Center for Middle East Policy.

“Today, Jerusalem is the seat of the modern Israeli government. It is the home of the Israeli Parliament, the Knesset, as well as the Israeli Supreme Court,” said the president. “Today we finally acknowledge the obvious. That Jerusalem is Israel’s capital.” But while much of Israel’s government is based in Jerusalem, declaring the city Israel’s capital is not simply a “recognition of reality,” as Trump put it, it’s a provocation.

That’s because Jerusalem is considered unequivocally sacred territory for both Israelis and Palestinians, each group claiming historical and religious ties to the land. While Israel has longed to see Jerusalem recognized as its undisputed capital, so has Palestine hoped East Jerusalem would serve as the capital of a  future Palestinian state. The international consensus was — until yesterday — that no one party should have total ownership over the city. For this reason, Israel’s decades-long occupation of East Jerusalem is still considered illegal under international law.

By recognizing Jerusalem as Israel’s capital, Trump is not only unilaterally dismissing Palestinian claims to the city, he is emboldening the radical elements of the Palestinian National movement that opine of an Israeli-American conspiracy against Palestine. Responding to Trump’s speech, Palestinian Authority President Mahmoud Abbas said the action would push the region into “an endless religious war.” Hamas, which has governed the Gaza Strip since 2007, called for a third intifada against Israel.

Local protests began before Trump had even appeared before the cameras and are expected to continue until at least Friday. And the backlash isn’t limited to the occupied territories. On Monday, Politico reported that the State Department was preparing for possible protests and violence targeting US embassies and consulates around the world. The Canadian government also warned its citizens travelling in the Middle East to “exercise caution.”

Though the president said that his administration’s decision isn’t “intended in any way to reflect a departure from our strong commitment to facilitate a lasting peace agreement,” it actually does just that. The move confirms whose “side” the Trump administration is on and means the US can no longer act as an ostensibly impartial broker between Israel and Palestine. While the US has historically been the most active external player in peace talks, the move, according to Palestinian officials, now makes America  “a direct party to the conflict.”

In anticipation of today’s speech, Trump heard from several world leaders who cautioned him about the implications of recognizing Jerusalem as Israel’s capital and moving the embassy there. King Abdullah II of Jordan highlighted the collateral damage this move could have, warning that it would be used as fodder by terrorist groups like Daesh. Turkey’s president, Recep Erdogan, has threatened to cut off diplomatic ties with Israel, calling Jerusalem a “red line” for Muslims. French President Emmanuel Macron, meanwhile, pointed out to Trump that Jerusalem’s fate should not be decided by a foreign power, but instead through peaceful negotiations between the opposing parties.

In his phone call with Trump, Macron was also said to have made reference to the two-state solution, a remedy that many experts have argued is the only possible way Israel can remain both Jewish and democratic in the future. “There is no alternative to the two-state solution. There is no Plan B,” read the statement released by UN Secretary General António Guterres following Trump’s announcement.

Trump made only one mention of the two-state solution during his speech yesterday, saying that his government would support such a solution “if agreed to by both parties.” However, the president’s decision to recognize Jerusalem as Israel’s capital makes the prospect of negotiating a two-state solution seem nearly impossible at this point, especially as the Israeli government ramps up the construction of illegal settlements.

President Trump may believe he has simply “acknowledge[d] the obvious,” but, in actuality, this illegal move has needlessly thrown a wrench into potential peace talks that most already had little faith in to begin with.

Photo of President Donald Trump at the Western Wall in Jerusalem in May 2017. Courtesy of the White House’s Flickr page. Public Domain.