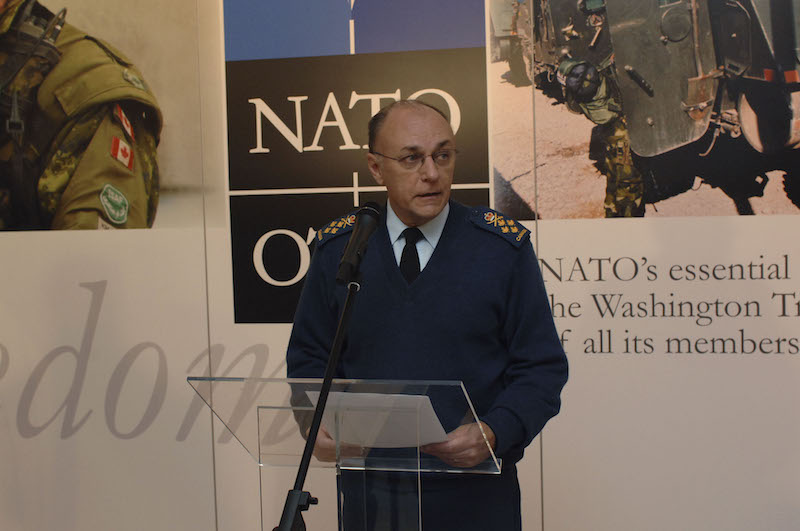 Touraj Riazi had the honour of interviewing General (Ret’d) Raymond R. Henault who currently serves as the Chair of the Strategic Advisory Council and Chief Strategic Advisor at ADGA Group Consultants Inc. General Henault previously served as Chief of the Defence Staff (CDS) from 2001-2005 and as Chairman of the NATO Military Committee from 2005-2008. General Henault was also a member of the Minister’s Advisory Panel for Canada’s Defence Policy Review.

Is Canada’s credibility in institutions such as NATO and the U.N. diminished when the Canadian public does not support the long-term deployment of Canadian troops?

The Canadian public is highly supportive of what the Canadian Armed Forces (CAF) do for Canada. There was a time in the not-too-distant past when the public’s trust, confidence and respect for the CAF had been sorely affected by the Somalia Scandal (in the mid-1990s). This was a very deep and dark time for the CAF. During my time in seats of higher responsibility at NDHQ (as Deputy Chief of the Defence Staff in the late 1990’s and then as CDS), there was, however, a turning point in the public’s opinion of and renewed support and respect for the CAF. This occurred because of the Canadian military’s strong support to Canadians at home during the Manitoba floods and forest fires in British Columbia, and its strong assistance to the many Canadians affected by the Ice Storm in 1998.

When I took over as CDS in 2001, a few months before 9/11, Canada was also providing highly acclaimed support to the United Nations for peace operations in the Balkans, in the Middle East and Africa. At the same time, a number of important changes were being made to the CAF’s legal, operational and military police frameworks, in response to the Somalia Inquiry. These many changes, including the improved leadership and management structures, and Canada’s robust military response to the terrorist attacks of 9/11– especially in the immediate aftermath of 9/11 and through to the multiple deployments to Afghanistan in 2001-2002 and beyond–significantly renewed the confidence of the Canadian public in the CAF.

As Afghanistan continued to evolve, and demanded an increasingly longer-term commitment that resulted in a transition to combat operations in 2006, the ability to support UN peace operations diminished as the requirements of Afghanistan needed to be balanced against UN requirements. This also resulted in significant changes to the command structure in Canada, and the establishment of several new commands in 2006, including Canada Command. These changes occurred at an important point in time that served to further enhance the credibility and reputation of the CAF amongst the Canadian public.

That being said, I am not entirely convinced that the Canadian public fully understands that peace operations now are very different and much more dangerous than peace operations of the past. The resulting changes and heightened risks have been continually acknowledged by the Defence Minister, the CDS and others, and I am sure it was done at the multinational conference on peace operations hosted by Canada in Vancouver. Contemporary peace operations require much more robust forces and involve rules of engagement, which were not included in the vocabulary of the CAF in the 1990s and during the post–9/11 period. Even at heightened risk, I sense that the Canadian public continues to fully support the CAF in all forms of operations.

The Canadian public sees the value of what Canada is doing to oppose recognized threats related to terrorism, which are as serious a threat to Canada as they are to other nations. Throughout the fight against ISIS in Iraq, the public has strongly supported Canada’s contribution of special operations forces, transport aircraft, air-to-air refuelling aircraft, fighter jets, trainers and capacity builders– you name it.

The CAF’s assistance to Ukraine, in the wake of the difficult times experienced by Ukraine with the annexation of Crimea, has also been significant. Canada has stepped up to the plate to help, especially in terms of capacity building. Canada has done so while simultaneously satisfying its NATO obligations by leading a multinational battlegroup in Latvia– one of three in the Baltic. This has become somewhat of a flagship for what the CAF represents to the Canadian people, as a strong contributor to global peace and stability where it is needed the most.

These contributions by Canada reflect the strong support of its public, because decisions involving the deployment of Canadians abroad– while clearly the purview of Government – have generally had the strong bi-partisan support of all members of Parliament and their constituents.

Can delays in NATO’s NATO Response Forces (NRF) be mitigated by proposals such as the ones made at the recent NATO defence ministers meeting— upgrading civilian infrastructure, adjusting national legislation?

I have not seen the transcripts from the most recent NATO Defence Ministers’ meeting. However, based on the feedback I received during my time at NATO and the preparations for a keynote address for a NAOC panel discussion at the British High Commission in October, I have no doubt that the efforts being made to improve the capability of NATO response forces is very positive. There is obviously a strong commitment by NATO to respond quickly in times of crisis. This was clearly reinforced during the Wales Summit in 2014, where the Readiness Action Plan (RAP) was created and a Very High Readiness Joint Task Force (VJTF) was agreed upon.

It is important to respond quickly as an alliance if you are going to provide for stability and security not only within but also outside the NATO area. A VJTF must also be available in a size much less overpowering than the NRF. Such a force is an important part of the alliance’s continuous projection of force into Afghanistan, the Balkans, and significantly, the Baltic.

I was Chairman of the NATO military committee when NATO established and declared initial operational capability of the NATO Response Force (NRF) at the Riga summit in 2006. That was NATO’s first foray into the establishment of a very credible and capable response force. The NRF was a capable force but it proved difficult to sustain because of the large requirements and high demand for forces.

A rapid response force requires many components to be effective, including equipment capability, intelligence, mobility, communications, and more. Most nations were unable to sustain these new requirements because of the competing demands of simultaneously managing contributions to ISAF in Afghanistan, KFOR in the Balkans, and many others. The focused and more realistic demands of the RAP are very positive.

Canada has been viewed as a significant player in this context, and has gained a large amount of credibility by stepping up to a leadership role in NATO’s Enhanced Forward Presence (eFP) in Latvia. In a recent conversation with the commander of the Canadian Army, who had recently visited Latvia, I was told of the positive feedback he received from national authorities in Latvia.

There are, of course, nations other than Canada in that battle-group, but it is obvious the leadership being applied to operations in Latvia, along with other contributing nations in the Baltic countries, is a massive promoter of security and stability in that part of the world, where allies have reinforced the need for deterrence. Defence and deterrence remains alive and well in NATO, and the feedback is very positive in a Canadian context.

Is the credibility of the alliance as a whole affected when internal disputes amongst particular member states are made public?

From my perspective, the NATO centre of gravity is Alliance solidarity.  This is reinforced by consensus-based decision-making at the Alliance level in both military and political terms.  While there can be disagreements within the Alliance on various issues, they are normally resolved through negotiation and coordination, at both the North Atlantic Council and Military Committee levels.

Disagreements or “disputes” are a fact in large organizations like NATO, but they never gave me undue concern during my time in Brussels, as they always get resolved at the end of the day. What is important is that each member nation of NATO has a voice and a vote when making Alliance–level decisions. This is the strength of the decision-making process in NATO, and is crucial for nations when making decision to put their troops in harm’s way in support of a NATO mission.

Without reference to any specific instances, there were only a few instances during my term as Chairman of the NATO Military Committee that I was unable to achieve a consensus amongst member nations; but, the factors blocking consensus were political rather than military. In those cases, I had the option of submitting a Chairman’s memorandum to the NATO Secretary-General to seek his assistance in resolving the impasse, which I exercised as necessary (and only on three occasions over three years). A consensus, however, must eventually be reached, as any impasse ultimately chips away at the solidarity of the alliance.

NATO missions in Afghanistan, Libya, Syria or Iraq all required a consensus prior to the deployment of troops and equipment. It is important to note that not every nation necessarily contributes troops to an operation once approved, as NATO contributions are always voluntary. However, political support for a mission is critical and is non-negotiable once the North Atlantic Council has agreed a mission (always by consensus).