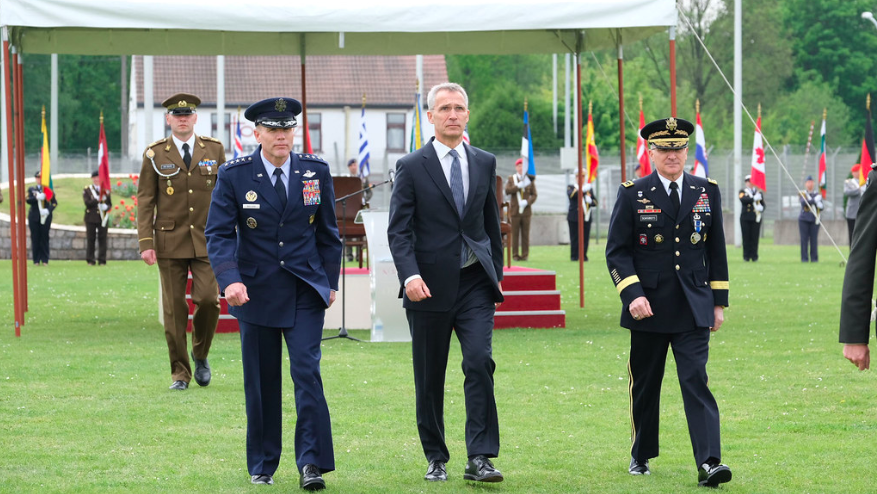 When people talk about NATO, they often refer to the Alliance as a unitary actor that supports certain values and undertakes specific actions. Sometimes they discuss the policies of its member states. There is nothing wrong with referring to NATO as a single actor or as a group of states; an alliance is meant to bring together like-minded nations to pursue common goals. However, such rhetoric can disregard the accomplishments of NATO’s valuable leaders who ensure that the NATO Command Structure can function seamlessly. This article seeks to shed light on one such leader: the Supreme Allied Commander Europe (SACEUR).

On May 3rd, US Air Force General Tod D. Wolters replaced US Army General Curtis M. Scaparrotti as SACEUR at the change of command ceremony at the Supreme Headquarters of Allied Powers Europe (SHAPE) in Mons, Belgium. Scaparrotti – who has been SACEUR for the past 3 years – will soon retire from the US Army after over 40 years of service. At the ceremony, NATO Secretary-General Jens Stoltenberg described Wolters’ new role as “One of the most challenging and most important military positions in the world.”

In order to understand the role of SACEUR, one must understand NATO’s structure. The Military Committee, which consists of the Chiefs of Defence of all NATO members, is the Alliance’s highest military authority. It presides over NATO’s Command Structure, which comprises of two strategic commands: Allied Command Operations and Allied Command Transformation. The latter is based on Norfolk, Virginia and led by the Supreme Allied Commander Transformation. The Command is responsible for education, training, and interoperability. SACEUR commands the Allied Command Operations, which is in charge of designing and executing NATO military operations and making operational recommendations to the Military Committee. SACEUR is also a spokesperson for the organization and conducts frequent visits to NATO members and partners.  Allied Command Operations is headquartered in Mons, has two Joint Force Commands in Naples and Brunssum, and three tactical level commands in Izmir (land), Northwood (maritime) and Ramstein (air).

The SACEUR position was created in April 1951 and occupied by General Dwight D. Eisenhower. SACEUR has always been in charge of SHAPE. For half a century, the Supreme Allied Commander was responsible for NATO operations in Europe. In the early 2000s, SHAPE was put in charge of all NATO operations and subsequently, the geographical scope of SACEUR activities was expanded (though their names stayed the same). There is no set term for SACEUR; terms have ranged from 1 to 8 years, though most officials hold the post for 2 or 3 years.

The position is always held by an American military officer, who also becomes the head of US European Command (EUCOM). As such, SACEUR is nominated by the American president, confirmed by the Senate and appointed by the North Atlantic Council. Wolters was sworn in as EUCOM Commander in Stuttgart a day before the change of command ceremony in Mons, placing him in charge of US operations focused on improving Euro-Atlantic security.

Stoltenberg commended Wolters’ predecessor Scaparrotti for confronting Russian aggression and terrorism in the Middle East and North Africa, bolstering collective defense initiatives, developing the Hub for the South and increasing activity in Eastern Europe. It is likely that Wolters will share Scaparrotti’s priorities; he has already discussed the importance of deterring Russian aggression, strengthening NATO’s relationships, encouraging unity among the Allies and adapting to a rapidly changing security environment.

In Mons, Wolters stated that “Vigilance endures.” There is little doubt that he will put his experience and expertise to good use and work with NATO members, partners and leaders to make the alliance more vigilant and secure in the face of increasingly complex transnational threats.