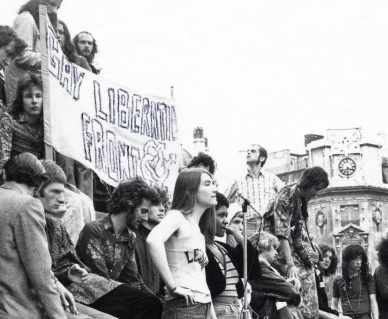 Today – June 28th, 2018, marks 50 years since the Stonewall , as some LGBTQ historians and demonstrators at Stonewall tend to call it, the Stonewall Rebellion. The notorious uprising sparked the Gay Liberation and completely changed the lives of generations to come. In 1969, the time of the uprising, consensual homosexual relations between men or between women were illegal in every U.S. state except for Illinois, which had repealed the law in 1961. Across the country, gay people were not permitted to serve in the military or in any position in the federal government, and, furthermore, coming out as gay could restrict one from pursuing careers in law or medicine.

NYC Mayor, John Lindsey, launched a crackdown on gay bars in the summer of 1969. In the early morning hours of June 28th, 1969, NYPD police officers raided the Stonewall Inn, a small, mafia-run bar located on Christopher Street in New York City’s Village that served as a haven for members of the LGBTQ community. Police raids on Stonewall were certainly not an abnormal occurrence. Typically, the bar owners would be levied a light fine by police officials and, in turn, they would open the bar again the following night.

Yet, there was something unusual about the raid on June 28th. The raid began as most did, with police officers entering the building, arresting employees, and throwing the customers onto the street. The crowd outside Stonewall was growing at a rapid rate. The energy was heightened, with everyone cheering each time a patron was forced from the bar. People were laughing and joking around, reports Robert Bryan, who arrived at the scene following the raid. However, Bryan accounts, the festive mood shifted after a drag queen was attacked by a police officer after hitting him with her purse. Following this, the police officers retreated back to Stonewall and began beating . The number of , soon after, there were several hundred gathered outside. “We were finally fighting back and it was exhilarating,” recounts Bryan. The demonstrators trapped the police officers in the building. As a result, riot police arrived at Stonewall to rescue their colleagues. One police officer was treated in the hospital for head wounds and thirteen demonstrators were arrested.

Following wide-spread media coverage of the event, thousands of protestors clashed with riot police over the next six days. The aftershock of Stonewall saw an explosion in the gay rights movement. Martha Shelley, a prominent gay rights activist and writer, climbed onto a water tower near Stonewall with an important message for the crowd – come out and “walk in the sunshine.” Following this proclamation, and others from prominent activists, the crowd marched toward Stonewall Inn. This was the first time in New York history that gay people, demanding equality and calling for “Gay Power”, had marched openly.

Perhaps one of the most important impacts of the Stonewall Inn riots was the creation of the Gay Liberation Front (GLF). On October 13th, 1970, one year after the creation of the GLF in New York, another branch was created in London. It was composed of merely 19 people meeting in a basement at the London School of Economics. However, the GLF moved on and grew to become a defining feature of the gay rights movement.  In a newsletter from 1970, the GLF stated their shared goal of radical idealism, “The Gay Liberation Front is a militant coalition of radical and revolutionary homosexual men and women committed to fight the oppression of the homosexual as a minority group and to demand the right to the self-determination of our own bodies.” They believed in freedom from hate and oppression and, more specifically, freedom from homophobia. The GLF revolution embodied the notion of non-violence. It questioned and from marriage to monogamy to the war in Vietnam. They were not just calling for equality within the status quo, rather; they desired to change the fragmented and oppressive status quo for something more inclusive, both for LGBTQ people and for everyone else. It is understood now to have been an anti-capitalist, anti-imperialist movement, striving for emancipation for the good all of humankind.

In the decade that followed the first gay-pride march, the federal exclusions on lesbians and gays were lifted and medical centers overturned their long-held belief that homosexuals needed psychiatric treatment. However, gay marriage was not recognized federally in the United States until 2015. Even now in 2019, there are still significant barriers that need to be broken. Gay people are still at risk of being fired in many U.S. states and members of the LGBTQ community continue to face social ostracism, discrimination, and even violence. David Carter, author of Stonewall: The Riots that Sparked the Gay Revolution, affirmed that it is “very rare in human history that something that’s a totally spontaneous act changed the course of human history for the better.” The Stonewall Riots has impacted generations, and its stories of courage and might will continue to spark inspiration and drive for generations to come.