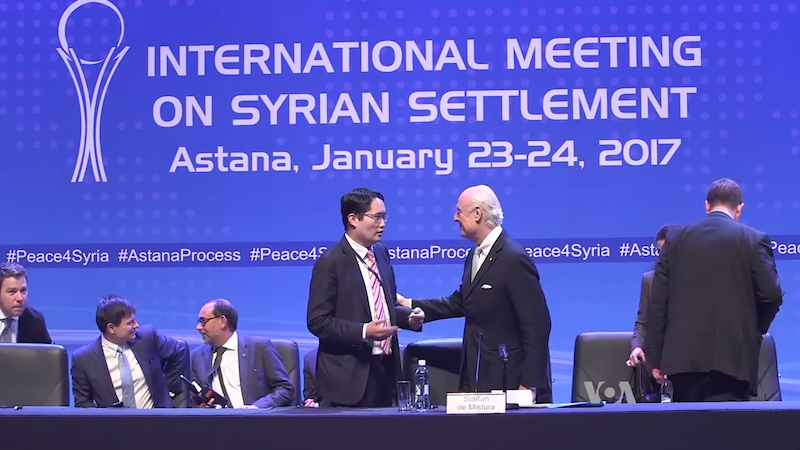 Over 23 and 24 January, the Syrian government and Syrian rebel groups met in Astana, Kazakhstan to engage in peaceful negotiations that would hopefully start the end of the six-year long Syrian civil war. The talks have resulted in an agreed establishment of a trilateral commission mechanism to enforce the current ceasefire negotiated in December 2016 after the Syrian government, with the help of Russia and Iran, reclaimed the city of Aleppo. The talks have been considered significant because, for the first time, rebel groups have been invited to the table, while Western powers have been sidelined with Russia, Iran, and Turkey taking center stage. While Russia’s leadership in the peace talks carries implications for Russian political gain, it also brings with it a series of challenges that Russia must navigate if it hopes to establish itself as a strong regional player.

After a rough beginning with both the government and opposition trading barbs, Russia, Turkey, and Iran agreed on monitoring and maintaining the current ceasefire. However, details on what that mechanism would look like have thus far been unclear, with both the Syrian government and the opposition refusing to sign the agreement (although both are reportedly determined to strengthen the ceasefire). The opposition is wary of Russian sponsorship of the agreement, given Russia’s military intervention in support of President Bashar al-Assad and its proven ability to keep the Syrian regime in power, as evidenced by the defeat of the opposition in east Aleppo. Rebel groups also remain concerned that power will be skewed in favor of the government, which is supported by the fact that Turkey, a vital NATO member, has recently shifted its position on al-Assad.

Turkey and Russia entered the Syrian civil war on opposing sides. However, today both states have started to build up military co-operation to fight back against widespread terror groups also fighting in the region (ISIS and Jabhat Fateh al-Sham). Initially, Turkey was adamant that al-Assad step down however, a few days before the peace talks began, Turkish Deputy Prime Minister Mehmet Simsek claimed that although Assad remains responsible for human rights violations, “[t]he facts on the ground have changed dramatically, so Turkey can no longer insist on a settlement without Assad, it’s not realistic”. Hence, the Syrian rebel groups’ strongest ally of the tripartite alliance now appears changeable. However, Turkey’s compromises may be due to its own vested interests in fighting the Kurdish movement which has gained traction over the years, especially in Syria as the ‘People’s Protection Units’ (YPG) militia. The group has been backed by the US in the Syrian conflict, causing further strain to the Turkey-US alliance. In this way, Turkey’s shifting alliance in hopes of Russian support against the Kurds, provides Russia even more of an extended reach into the region and up to the EU’s own borders.

Additionally, the Syrian opposition have accused the Syrian government and Lebanese group Hezbollah (allied with the Iranian militia) of breaching the current ceasefire agreement. There have been reports of government and allied forces fighting in the rebel-held Wadi Barada area under claims of terrorism, however the rebel groups believe themselves to be the targets rather than the terrorists. This has angered the opposition, making them distrusting of Iran’s ability to be a reliable sponsor for monitoring and enforcing the ceasefire. Consequently, as Russia has already helped the Syrian government to victory, Russia may be forced to compromise on its alliance with Iran. Russia has already supported the opposition’s view that Iran and Syria are responsible for the ceasefire breaches, and it may be required to go further if it hopes to solidify a peaceful political process. Without this compromise, Russia may be perceived as continuing to support the government at the expense of the rebels, thereby risking loss of the current tenuous cooperation with the rebel groups to comply with the ceasefire. However, with the neglect of Arab allies under the Obama administration, and President Donald Trump’s uncertain intentions towards ending the Iran nuclear deal, Russia’s pursuit of its alliance with Iran could leave Russia well-positioned to fill the power vacuum left behind.

By enforcing adherence to the ceasefire, Russia stands to reap political and military benefits. In the wake of NATO’s recent deployments in Eastern Europe, practically on Russia’s western borders, Russia is pushed to find a way to gain a foothold in the Middle East that can work to counteract NATO. Playing a large role in ending the Syrian conflict may very well be that foothold. Indeed, Russia and Syria have already struck a 49-year military agreement (with automatic 25-year extensions) allowing 11 Russian ships, including nuclear-powered vessels, into the Tartus port, and air forces to continue landing in the Russian-built Khmeimim Air Base in Latakia — crucial military bases Russia has used in the civil war. While Russia claims it will help fight terrorism, it will also grow Russian naval and aerial defense bases in the Middle East at a time when Russia is feeling threatened by NATO’s own military posturing. Reaching a successful outcome in the Astana peace talks can only solidify Russia’s alliance with the Syrian government as doing so would be in Russia’s best interests if they hope to continue military expansion in the region.

Astana has been a major juncture in opening a dialogue between the extremely divisive opposition and government, enforcing a commitment to minimized violence and humanitarian access, and support in working towards a cessation of hostilities. Should the ceasefire hold through monitoring and enforcement, and create a stable environment for a conducive intra-Syrian political process at the UN-sponsored talks in Geneva on February 8, 2017, Russia stands to gain a greater sense of legitimacy as an influential power in the Middle East able to consolidate security in the region. However, the talks have not been without their own flaws and challenges. Failure to end current ceasefire violations and new reasons for distrust could still derail Russian political gains. By overcoming these challenges, Russia may be able to carve itself a space in the Middle East as a strong regional player, and could reshape the world order from reliance on the West to the East.

Photo: The international meeting on Syrian settlement in Astana, Kazakhstan (2017), by Voice of America via Wikimedia Commons. Listed under Public Domain.