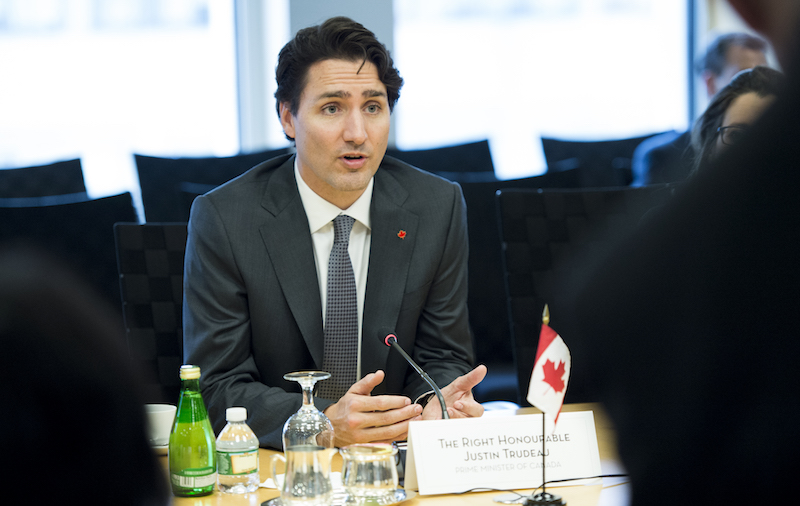 The Liberal party pledged to boost spending, raise taxes on the wealthy, legalize marijuana, take in more refugees, and even reform the voting system. By boosting spending the Liberals would accept a series of budget deficits in order to fund the major infrastructure spending to boost the economy.

Trudeau has promised to balance the budget by 2019-2020. Raising taxes for the wealthy was one of his pledges, due to the previous government’s favouring tax cuts for the rich and big corporations over regular Canadians. The Liberals promised on to have a tax hike on Canada’s top 1% to pay for a tax cut on the country’s middle class. The projected tax hike would be 4% on those who made over $200,000, and those who made between $44,701 and $89,401 thousand would see a cut of around 1.5%.

The pledge to legalize marijuana was a priority through Trudeau’s campaign, and he spoke on the initiative to legalize the drug that has been costly for the government in law enforcement. He also promised to eliminate criminal records of many Canadians. The initiative on legalization of marijuana appeals to youthful generation.

Taking in more refugees was one of the pledges that Trudeau made a high priority in his campaign. He wanted to continue supporting immigrants and Canadians of all cultures, and by doing so he took the initiative to process 25,000 Syrian refugees and make a $100 million investment into helping them resettle.

Trudeau has kept some of the promises. With regard to equal representation in his cabinet, Trudeau has as many women as men. He has lessened the tensions when working with provincial and municipal leaders by having a more open and accessible style of governance. One of the ways the federal government is working with the provinces is by improving access to and reducing the cost of prescription drugs by bulk-buying scheme. The Liberal government has withdrawn the Canadian fighter jets from Syria and Iraq, and the focus of the mission will be on beefing up humanitarian aid and military support to train Iraqi ground forces to fight against ISIL.

There are still a lot of initiatives in progress. One of the initiatives in progress is the launch of a national inquiry in missing and murdered indigenous women. The federal government has achieved this by launching the first of two phases of a much-awaited national public inquiry, where ministers will meet with the families of missing and murdered indigenous women in Ottawa. Trudeau is also working on a plan to invest $500 million over 2015 to 2018 for building and refurbishing First Nations schools. On combating climate change, Trudeau has made efforts to meet with premiers and led a delegation to the UN climate summit in Paris to indicate that Canada will be more active. Some other key initiatives in progress are reopening nine Veterans Affairs offices to better support veterans where they live; repeal anti-union legislation passed by the conservative government; create a parliamentary oversight committee on national security operations; and lifting the Mexican visa requirement for travelers.

This far in his term, Trudeau has broken some of his campaign promises, or is likely to break them. The goal to resettle 25,000 refugees by the end of 2015 was not met. The 25,000 targets were officially achieved on March 1, 2016, which is two months later than promised. On of the key promises for Trudeau’s campaign was running a short-term deficit of less than $10 billion in each of the next two to three years, in order to reduce the debt-to-GDP ratio, which would balance the books in the final year. So far, Trudeau has acknowledged that the deficit will exceed $10 billion this year, and most likely the years to follow, and that it will be difficult to balance by the fourth year. The Liberals faced accusations of broken election vows as their centrepiece pledge to raise taxes on the biggest income earners, while cutting them in a lower bracket, passed the House of Commons.

Considering Trudeau’s track record while in office, he still has a lot of work to do. There are a lot of promises and initiatives that have not yet started or are barely in progress to deliver the promises that were made during his campaign.