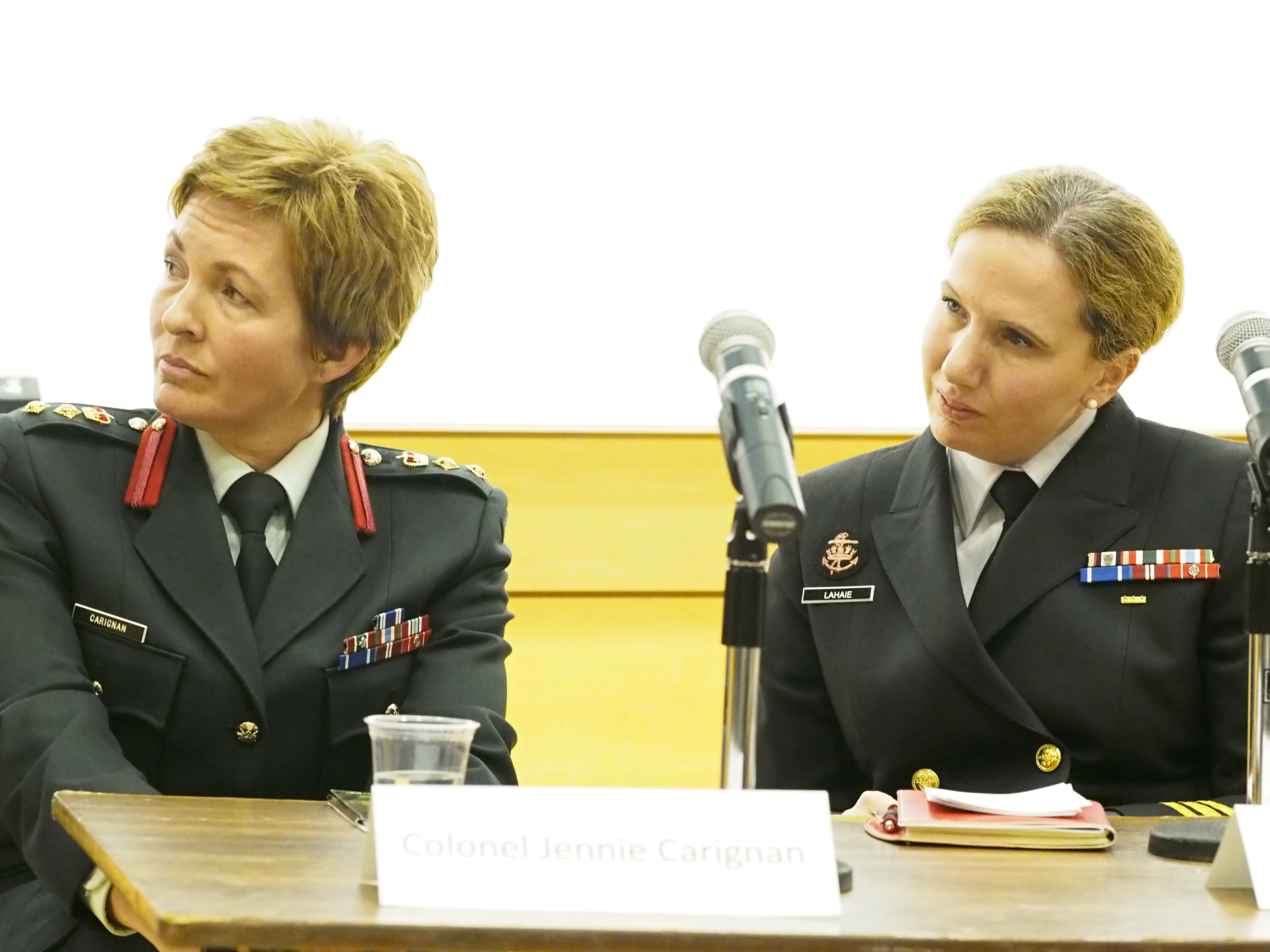 On June 15, 2016, Brigadier-General Jennie Carignan became the highest-ranked woman in the Combat Arms, assuming the title of Chief of Staff of Army Operations. Carignan’s promotion marks a milestone for gender equality not only in Canada, but also across the world. She is the first woman in the world to assume this rank from the combat arms trades.

Carignan enrolled in the Canadian Armed Forces in 1986, seven years after the Royal Military College began admitting women. She joined the Combat Engineer trade in 1989, when all military occupations were opened to women. She also holds degrees in Fuels and Materials Engineering, Masters of Business Administration, and a Masters of Military Arts and Science. She was the Commanding Officer of the Task Force Kandahar Engineer Regiment, and she was previously deployed to Bosnia-Herzegovina and the Golan Heights.. Carignan has also been the recipient of several prestigious awards, including the Gloire de l’Escolle medal, recognizing graduates from l’Université Laval who have distinguished themselves professionally and in community service. Additionally, she was given the Hermès Award recognizing the achievement of Laval graduates who have made a significantly impact in Administration, and the Major-General Hans Schlup Award for excellence in international relations.

Currently, women represent 15 per cent of the CAF. While this number is not indicative of statistical gender equality, the CAF is widely seen as standing at the forefront of gender integration in the military due to Parliament’s passing of the 1982 Canadian Charter of Rights and Freedoms and 1985 Canadian Human Rights Act. Carignan is working to increase that statistic by increasing the recruitment of women to combat roles. During 2013-2015, when she met with girls and mothers at open houses and appeared in Quebec media, the recruitment of women to the Royal Military College in Saint-Jean-sur-Richelieu jumped from 10 to 25 per cent.

Carignan also combats workplace sexism, having fired a sexist chief warrant officer at the age of 24 without even consulting her boss. She admits that firing people on these grounds occurred in most of the jobs she had. This is an incredible achievement in the fight against workplace discrimination, and the fact that it is a woman being the leader of her own cause is all the more laudable. A woman is uniquely suited to reconcile these issues by demonstrating the ways in which sexist remarks have no merit. Carignan is no doubt a role model to other women experiencing sexism while on the job or seeking upward mobility within the CAF. Her successes just go to show the inaccuracy of sexist remarks, and her ability to mitigate them further runs contrary to the message that women are somehow less capable than men.

Carignan’s colleagues indicated that she has earned the respect of a leader. Retired three-star general with 35 years of experience Michel Maisonneuve rated her “one of the best leaders I’ve ever seen – man or woman.” Defence Minister Harjit Sajjan said she “continues to be a trailblazer for women in the Canadian Armed Forces.” Lieutenant-General Marquis Hainse and Rear-Admiral Jennifer Bennett have also issued their congratulations.

Carignan’s accomplishments are not only a demonstration of the CAF’s success in opening the doors to women, but also an achievement for female empowerment in general. Carignan is a role model leading both men and women in combat – not just the militarily, but also in fighting stereotypes and discrimination.