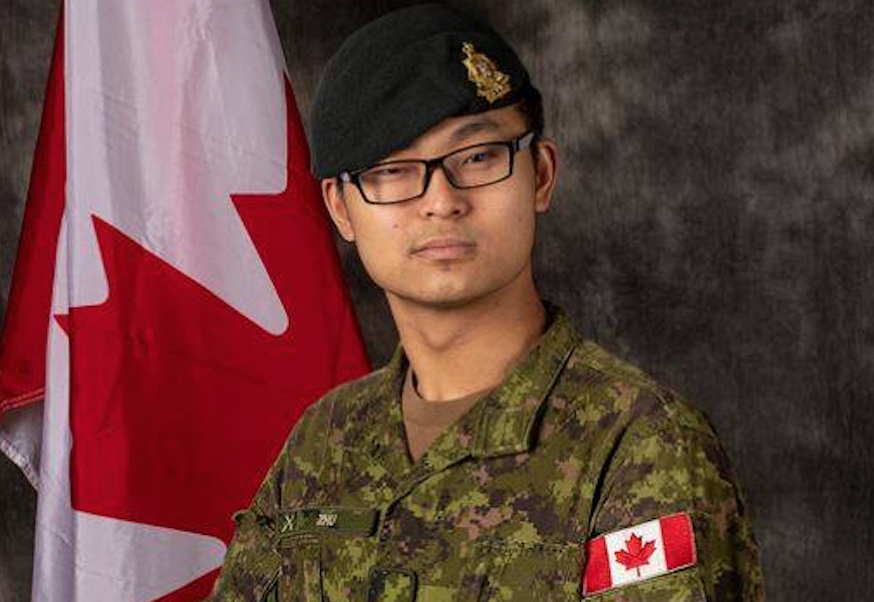 Anvesh Jain, the Program Editor of Canada’s NATO, sits down with a special guest.

Anvesh: Hi Steve, how are you doing? Do you think you could introduce yourself?

Steve: Hi, doing fine. My name is Steve Zhu, I’m currently a second-year student at the University of Toronto, and a reservist at the Royal Regiment of Canada.

Anvesh: Let’s get right into it. I know you just got back from OP-LENTUS. Can you talk about what that is, what you did there, and how that experience went for you?

Steve: So Operation LENTUS is a domestic operation that includes both regular and reserve force elements. What we were doing as part of OP-LENTUS was help the provincial authorities with floods that affected multiple areas in Canada including B.C, Ontario, Quebec, and the Maritime provinces. We were assisting with sandbagging efforts, clearing blocked roads, helping out with voluntary evacuations and assisting local authorities in shoring up infrastructure. The experience was a special one for me, as it was my first deployment. It gave me a look at what you can be doing as part of the Canadian armed services.

Anvesh: Wonderful. I think a lot of Canadians aren’t too familiar with our reserve forces. Could you explain a little bit, and perhaps talk about how the reserves are different from the regular armed forces?

Steve: The Army Reserve is primarily a part-time organization. We train one night per week and one weekend per month, and most of us also attend school or work full time.  Most reserve courses are conducted on weekends, or in blocks over the summer. The Army Reserves guarantees full-time summer employment for the first four years after their enrollment, during which time they will complete their basic training, trade-specific training, and possibly a junior leadership course.  The purpose of the Army Reserve is to train soldiers who are ready to augment the Regular Force on domestic and international operations.

Anvesh: What motivated you to get involved with the Canadian Reserves?

Steve: I joined the reserves out of high-school, hearing about it from a friend. I thought it was a pretty cool job where you do tough but meaningful things, and it definitely helps that the reserves are helping me pay my tuition!

Anvesh: You mentioned that you were a full-time university student. Talk about the relevance of your degree to your service with the reserves, and how you’re able to find time for both.

Steve: Time management is one of those main things you need to have as a reservist. You will be required to take time off of school work for your training nights and field training exercises. There are times when your classmates are kicking back and relaxing, maybe on holiday, and you will be going off on taskings, field training exercises or courses. While it can get very stressful because of all the downtime you’re missing out on, it’s rewarding because of the opportunities you are able to access through the armed forces. I’ve had to take time off from my comfy co-op this summer to be on OP-LENTUS, so instead of sitting in an office chair I had to fill and move sandbags for two weeks in the sun; it was backbreaking labour but I could appreciate the valuable work that we were doing for the disaster stricken communities that we were working with. The reserves also have a lot of networking opportunities that allow you to talk to higher level government officials and officers with combat experience. This is particularly useful to social sciences, humanities students or anyone who wants to be involved in public service really. You also pick up a lot of soft skills – resilience to stress, communication skills, other things that contribute towards your personal development.

Anvesh: Alright Steve, what is your favourite part about being in the reserves?

Steve: My favourite part of being in the reserves is the fact that you’re around a very dedicated group of people, with a lot in common in terms of interests, aspirations, and the direction they want to take their lives. Uncomfortable situations become a lot more bearable when you’re around a group of people that you can trust, and are in the same boat as you doing the exact same thing that you are. I’m around a great group of people that will support me through long rucksack marches on tough courses, or when it’s cold, wet and dark on a winter field training exercise. I’m hard pressed to find any sort of organization that can build the same kind of bonds between co-workers that the armed forces could.

Steve: A big part of being in the reserves, especially if you’re on an operation or in training, you’re required to live a very physically intensive lifestyle. Early mornings, late nights. You’ll be required to wake up at about five or six in the morning, and it’s pretty strenuous on the body, especially considering you’ll be on your feet all day and doing things that are hard on the body. Sometimes there’s a lack of access to… proper infrastructure. I’ve honestly never had to use a porta-potty, or set up a hooch in the woods with angry mosquitoes all around you until BMQ, I hated the outdoors at first since I’ve lived in a city all my life. It was difficult to adjust to, but by the time I was done my infantry qualification course having to spend a weekend or even longer out in the elements in a makeshift shelter didn’t really bug me anymore.

Anvesh: What kind of personal challenges have you faced as a member of the Reserves?

Steve: Every stage of my training was a challenge, it was apparent that all the qualification courses I’ve had to do from BMQ [Basic Military Qualification] to DP1 [Development Phase 1] was made to test your limits and build your resilience and character. When I was on BMQ I experienced the “culture shock” of adjusting to a military lifestyle: the weekends that I did it became the toughest two days of the weeks I was on BMQ for. I was not acquainted to such a long work day – 5am-11pm(!) – the stringent kit inspections and the morning PT [Physical Training] made it all the more difficult. We were supposed to improve on our physical fitness every week on BMQ and that helped me get through my infantry qualification, which was even more physically demanding compared to BMQ. One particular thing that we did on that course was a thirteen kilometre rucksack march that called the BFT [Battle Fitness Test]. Our instructors woke us up with loud music at 2am when we were still groggy from the three hours of sleep we had and there was low hanging fog that day. We had to march with a sixty pound rucksack, our tac vests, body armour, rifles and helmet. It felt like I was carrying a baby on a hike and it was the toughest thing I did all summer, but it taught me a thing or two about being resilient. That’s definitely something you can take away and use in your everyday life.

Anvesh: Thank you for your insights. Let’s finish with a lighter question! I know you’re a big foodie – name your top three restaurants in the Greater Toronto Area (GTA) and why.

Steve: That’s a bit of a hard one! I’m a big dim sum fan. Whenever I feel like some dim sum, I usually go to a place called Din Tai Fung in Markham. For family gatherings, I go to a place called Congee Queen; they have a bit of everything. And when I’m feeling like some dessert, I go to Cafe Demetres. It’s a little pricey, but I happen to very much like their waffles.

Anvesh: I’ll definitely have to check them all out sometime. Anyways, thank you Steve – good luck with everything!