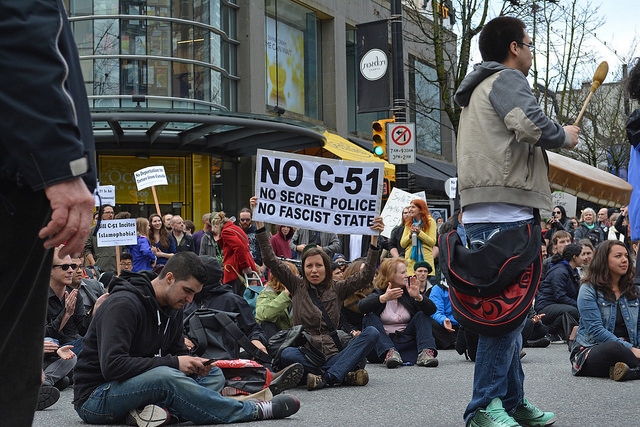 Canadian security intelligence oversight has been a recurring topic of debate in recent years. In 2015, it was especially contentious in light of anti-terror legislation, such as C-51, which many feared would violate the civil liberties of Canadians through abuse of enhanced law enforcement powers. At the time, Liberal Party leader Justin Trudeau supported the legislation, on the condition that if elected, a Liberal government would “introduce parliamentary oversight” to prevent any anticipated abuses.

Six months later, what is the status of Trudeau’s promised oversight?

This first instalment of a two-part series will explore the major criticisms of Canadian security intelligence oversight leading up to the 2015 federal election. The second instalment of this series will assess what changes, if any, have been implemented since the election of Trudeau’s Liberal government to address such criticisms.

To provide some background, there are a variety of security intelligence agencies that operate within Canada. This article will focus primarily on the Canadian Security Intelligence Service (CSIS), the Communications Security Establishment (CSE), and the Canadian Border Services Association (CBSA).

In 2015, the question of increased intelligence oversight in Canada focused primarily on CSIS. Despite the fact that CSIS has an independent review body, the Security Intelligence Review Committee (SIRC), there were calls for the creation of a parliamentary review committee to support this inadequate “patchwork, part-time, retroactive, and complaints-based review process.” Such a committee would allow for increased cooperation between security agencies and lawmakers, as well as help ensure policy compliance with the Charter.

Throughout these debates, the SIRC itself also identified a number of challenges with its oversight operations. For instance, it faced personnel shortages, barriers to interdepartmental and interagency investigations, and an increased workload with the introduction of wider investigative powers through Bill C-51. Most importantly, it had a meagre $2.87 million budget compared to that of CSIS which totalled approximately $500 million annually.

Like the SRIC, the CSE Commission, which oversees the CSE, was also experiencing a severe lack of resource capacity heading into the 2015 elections. At one point in the year, it only had 10 staff members to monitor the activities of the CSE’s more than 2100 staff. Moreover, the CSE Commission was not allowed to share information with SIRC, despite the CSE and CSIS doing so on a regular basis. This made it “difficult to see the whole picture” when it came to oversight of both agencies.

As for the CBSA, unlike CSIS and the CSE, it did not have any oversight body as of 2015. Implementing one to ensure “appropriate compliance with legislation and policy” was one of the central recommendations of a Senate Committee investigation conducted in 2014. The same investigation also called for an independent civilian review and complaints body, like SIRC or the CSE Commission, to oversee CBSA activities. A specific finding of this investigation was the need for better documentation practices within the CBSA, including the audio and video recording of all conducted interviews, and retaining of these recordings for a minimum of a decade afterwards.

And so, heading into the federal elections, there were concerns about the state of security intelligence oversight in Canada. Moreover, with counterterrorism being a central election issue, the question of finding a balance between security and liberty became a heated item on the agenda as well. While the Conservative Party opted to campaign on the platform that existing oversight mechanisms were sufficient in light of the new anti-terror bill, the NDP and Liberal Party both called for strengthened oversight.

Specifically, the Liberal Party promised to “create an all-party committee to monitor and oversee the operations of every government department and agency with national security responsibilities.”

Image courtesy of Jeremy Board.