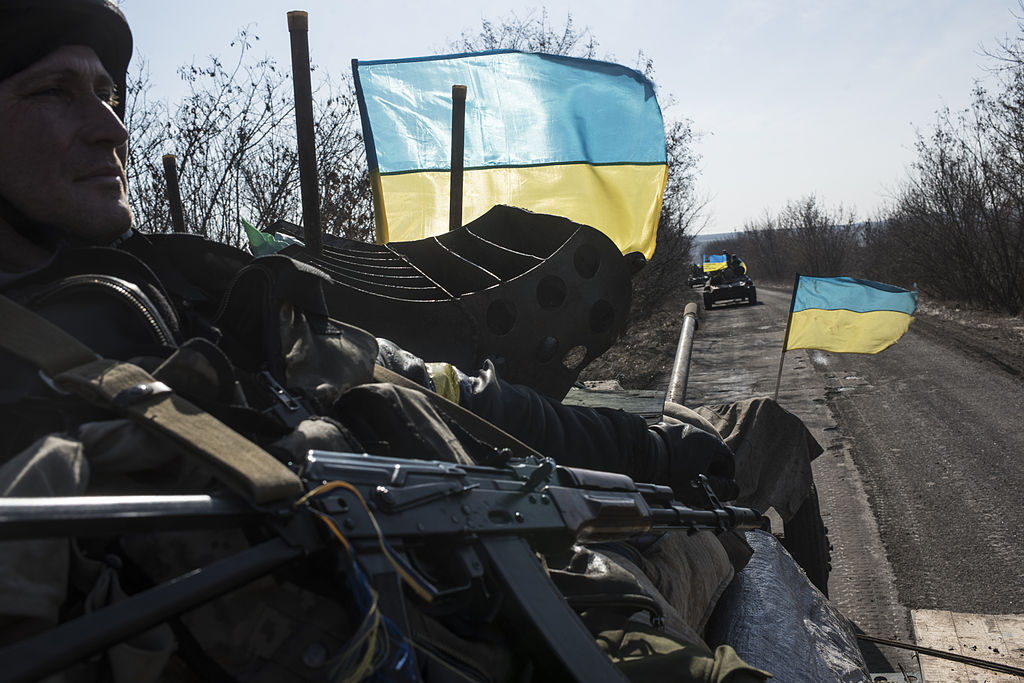 A well-funded and well-trained military is the security backbone for any sovereign nation. A strong military, by itself, can possibly compensate for the lack of a collective-security arrangement such as NATO, and vice-versa an alliance such as NATO can act as leverage for “weaker” member states who may not be able to. The problem with Ukraine is that it currently has neither.

Recent developments in the east of Ukraine have brought to light the realities of the Ukrainian armed forces; much is left to be desired from the ex-Soviet state’s military as it was left to deteriorate since Ukraine’s independence in 1991. The Ukrainian armed forces numbered 140,000 in 2014 when the conflict in the east escalated sharply, Ukraine had a standing army of 780,000 in 1992. The military budget shrank to 3.6% in 2013 from 6.8% in 2002.

The 1994 Budapest Memorandum saw Ukraine disarming its USSR-inherited nuclear weapons in return for territorial guarantees from the US, Britain, and Russia. The territorial guarantee made the military a secondary concern, if a concern at all, especially when in 2010 then-president Victor Yanukovich diverted funds from military expenditure towards internal security organs. These shifts were caused by a “sharp U-turn” towards an ideology which saw Russia as a “protector and ally”.

Post-Maidan revolution, when the annexation of Crimea was solidifying, many affairs became clear; one actor, Russia, was directly involved in compromising Ukrainian territory, while the others were practically incapable of guaranteeing the sovereignty of Ukraine in the Crimean peninsula. Ukrainian forces were unable to maintain Kyiv’s authority in Crimea, and the lack of a strong national identity saw some 16,000 personnel giving allegiance to Moscow.

The Ukrainian military was doctrinally, technically and morally unprepared to face any standing military, much less separatists backed by Russia which it viewed as an ally; the nationalist fervour of the Maidan revolution gave way to recognizing serious systemic flaws within the military structure. The army was even forced to a text-message fundraising campaign since the budget was not able to accommodate training needed for counterinsurgency.

When the military was in disarray and too demoralized to counter the pro-Russian separatist movements, the Donbass National Republic (DNR) and the Luhansk National Republic (LNR), civilian volunteer groups were organized. Units such as Azov, Donbas, Aydar picked up the slack. Although these groups varied in their ideologies they were able to effectively deter DNR and LNR forces from consolidating gains.

While these battalions provided a bulwark against separatist forces, concerns were raised as to who they would be responsible to. The answer was no one. Independent of Kyiv’s chain of command these various groups established independent funding, training and weapon procurement. To the concern of many skeptics, Azov battalion, which is a major contributor of volunteers and effective fighting force, espouses white supremacy and uses Nazi symbols.

The rhetoric that “fascist” groups are on the side of the Kyiv “junta” serves as potent propaganda for separatists; they view their struggle, supported by Russia, against a more “Ukrainian” Ukraine as a struggle against fascism aiming to subdue ethnic Russians in the east. This rhetoric is founded on limited historical incidents when Ukrainian nationalist groups co-operated with Nazi Germany as they fought the USSR.

These funds are established in order to bring the Ukrainian Armed Forces “in line” with NATO standards; foreshadowing future relations between a refreshed Ukrainian military and Europe at large. This is exactly what the Kremlin had feared, that NATO would be in their “backyard”. Russia’s short-sightedness has led to exactly that, strengthened ties between Ukraine and “the West”. Whereas a pro-Russian Ukraine of the past was seen by the Kremlin as an obstacle to NATO’s “encroachment” on Russia, Ukraine can now become a bulwark for Russian adventurism in Eastern Europe; a strong Ukraine is good for all its neighbours, many of whom are NATO members.

Volunteer groups, now, operate relatively anonymously, have, since April, been either incorporated into the recently re-vitalized Ukrainian National Guard or into regular armed forces; this includes Azov which is now part of the National Guard. Further concerns were raised when nearly 300 US paratroopers started to train Ukrainian National Guard units in Operation Fearless Guardian. Claims were made that they were empowering the anti-Semitic battalion; the American Embassy in Kyiv duly rejected the claims and clarified that Azov was not amongst the battalions being trained by them.

Canada is also deploying 200 Canadian Armed Forces personnel till March 31, 2017 to train Ukrainians and develop capacity-building programs. This is in addition to Canada’s $11 million non-lethal military aid package. Canada is home to the third largest Ukrainian diaspora after Ukraine and Russia.

Although the Ukrainian military is far from being perfect, it has recovered in part from the initial shock of the separatist movements and is recovering at a steady pace with the help of NATO. It is key to integrate volunteer battalions into existing military structures in order for them to operate cohesively, especially when facing an enemy which is supported by a regional power. Although, military means may not be the sole way to end the conflict in eastern Ukraine, a reinvigorated armed forces will be a cause for stability and deterrence to ill-will on the part of the pro-Russian separatists.

A strong Ukrainian military with a strong national identity, something which was lacking in the past, will help shape regional security in the future in Eastern Europe, and by extension Europe as a whole. Canada is playing and should continue to play a role in the successful cultivation of Ukraine, not only in the realm of security but in the spheres of good governance and development.