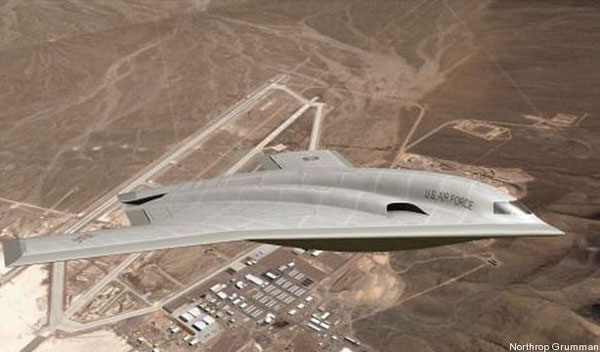 While production of the F-35 Joint Strike Fighter (JSF) continues to command public and political attention, the US Air Force (USAF) has set its sights on replacing its aging fleet of bombers by 2040.  On October 27, Defense Secretary Ash Carter announced that Northrop Grumman Corporation has won the contract to build 100 of America’s next generation of Long Range Strike-Bomber (LRS-B).   Prematurely dubbed the B-3 by some, the first units are expected to be fielded by 2025.

The LRS-B program must come at an affordable cost.  The program was launched in 2011 and is the ‘cost-conscious’ version of the more expensive ‘Next Generation Bomber’, which was cancelled in 2011 by then Secretary of Defense Robert Gates.  According to USAF’s budget request for Fiscal Year (FY) 2016, the development of the LRS-B ranks amongst its top three acquisition priorities.  For FY2016, USAF is seeking US$ 1.2 billion, making it the most expensive weapons system under its research, development, testing and evaluation (RDT&E) budget since the JSF.  Current cost per unit is estimated at US$ 564 million in 2016 dollars.

Prior to launching the LRS-B’s request for proposal (RFP) in July 2014, the Air Force took a number of measures to ensure cost of research and development would be kept down.  The first cost-cutting measure involved in-house research and development.  According to Defense News, the LRS-B ‘is unusually mature for a program at this stage of development, as the Air Force has already completed much of the testing and risk reduction.  Although there are no indications a complete prototype has flown, the team has already built component prototypes and scale models for testing.’

Another cost-saving measure was the Air Force’s requirement that the LRS-B be built with existing technologies; some of which are already developed by the service’s Rapid Capabilities Office (RCO).  Bill Laplante, head of Air Force Acquisition, defended this decision and argued that ‘just because its existing technology doesn’t mean its not incredible’.  In other words, existing technologies are on par with the USAF’s ambition of developing and building the most advanced long-range next generation stealth bomber.  The LRS-B will use an open-architecture approach.  This feature has a dual purpose.  First, it will allow the aircraft to be upgraded to incorporate new technologies as they emerge allowing the LRS-B to retain its technological edge over opponents.  Secondly, upgrades will come at a lower cost.

Much is still unknown of the LRS-B design features. The secrecy surrounding the program is dictated by the need to retain technological superiority and deny opponents the opportunity to develop early counter-capabilities.  Many of the details we know of the aircraft’s design features are speculation.  However, based on our knowledge of current bomber capabilities, it is worth examining what we know of America’s future bomber and how it will continue to support the nation’s foreign policy vision.

First and foremost, like the existing bomber fleet, the LRS-B is part of a long-range strike system that acts as a strategic deterrent; an important enabler of America’s global reach.  The LRS-B will have long range conventional and nuclear capabilities to strike any target, anytime, anywhere around the globe.  Retiring the entire bomber fleet composed of B-52s, B-2 and B-1Bs means the LRS-B will also have to accomplish a variety of missions. These include close air support (CAS), as performed by B-1s in Afghanistan and Iraq, nuclear deterrence, maritime surveillance and interdiction operations.

Based on current defense trends, the LRS-B will operate in a threat environment increasingly marked by advanced A2/AD capabilities.  To this end, the LRS-B must also be able to successfully and autonomously penetrate and operate in hostile airspaces.  The emphasis is on the term autonomously.  Currently, American bombers do not have air-to-air missile (AAM) capabilities.  This makes them vulnerable to an opponent’s effective air defense systems if unaccompanied by strike fighters.  To increase survivability in A2/AD environments, the LSR-B will have to be significantly stealthier than the B-2.  The extent of its stealth capabilities is currently unknown.  Some have argued that if detection capabilities outpace stealth capabilities, then the LRS-B will become another platform similar to the B-1B and B-52, only with a higher price tag.

Finally, sceptics have already warned cost estimates are likely to rise in coming years, with some critics arguing the cost per unit may reach a whopping US$ 3 billion.  Unknown payload features for example will help determine cost per unit.  A larger aircraft has a greater carrying capacity for larger and heavier weapons.  However, the cost per unit of a bomber increases when the size of the payload increases.  Accountable to a cost-conscious Congress, the USAF must continue its cost benefit approach in the development of the LRS-B program.  During the October 27 announcement, Laplante stated that ‘the program acquisition strategy has carefully integrated lessons learned from previous programs and consider all elements of life cycle costs in its design for affordability.  We are primed to deliver this capability in the most affordable, efficient way possible’.  Keeping the LRS-B cost down may prove difficult, but the Air Force is committed to the challenge.