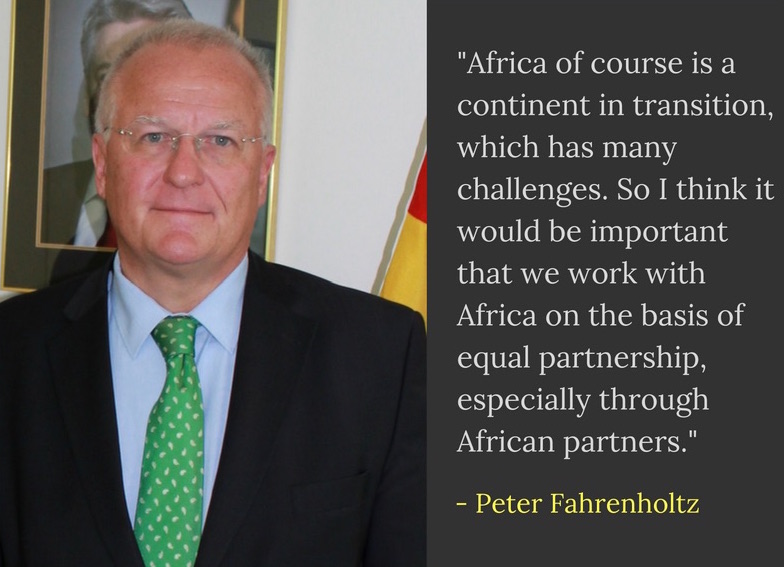 Peter Fahrenholtz is currently the Consul General of Germany in Toronto. After graduating from the German Federal Foreign Office Academy in 1988,  he entered the German Embassy in Bucharest that same year.  Since that time, Peter Fahrenholtz has served in various senior roles in the German Federal Foreign Office during times of crisis, prosperity, and historic change. From September 2012 to September 2016, he was Germany’s Ambassador to Rwanda.

The NATO Association had the opportunity to sit down with Mr. Fahrenholtz to discuss important experiences during his career, the importance of Africa in European affairs, and society and politics in Germany.

You have been in Toronto since September of this year. What have been some of your impressions of this city?

PF: We are very happy to be here in this great city. This city is so diverse, dynamic and multicultural. It is very exciting. It has already been 2 and a half months ago since I’ve arrived here in Toronto. I came with my family; we have 5 children. Our two youngest, both teenage girls, are still with us and they were all excited to come to Canada. I’ve worked in Asia, Africa, in various Islamic countries, the Middle-East. I even worked for a few months in Australia. So actually what was lacking was North America.

You were in the press recently because you mentioned how you were fascinated with the way in which Canada approaches multiculturalism. What have been some of your observations as to why it works relatively well here?

PF: I’m still trying to understand it. I can see in Toronto how people from so many different countries live and work together peacefully. It has to do with tolerance, which I think is one of the main principles of Canadian society. Perhaps also with the institutions and assistance to help immigrants settle in Canada. Basically, it’s about jobs and school. If immigrants can find a job and if their children are taken care of in schools, the process of integration becomes so much smoother. I cannot tell you what the secret it [laughs].

PF: Indeed you are right. Many people including many Germans are surprised when they hear that 20% of Germans have a migratory background. So indeed we also are an immigration society. This took us sometime to acknowledge because we always thought: we are a densely populated country in the heart of Europe so we cannot be a real immigration country. Factually, we have become one. I think there is a consensus that immigration enriches a society, culturally and in every other respect. It is a benefit for any society in the world. I think we are proceeding further along this path.

Just prior to coming to Toronto in September, you were the Ambassador of Germany to Rwanda from 2012 until 2016.

PF: Yes, I was posted for four years in Rwanda. It was a very exciting time. My government and I believe that Rwanda is a positive model of development for African countries. The German Federal Minister for Economic Cooperation and Development stated in a press conference when he visited Rwanda in the middle of August of this year that he was very much impressed by its performance. Prior to coming to Toronto, I accompanied him on this visit.

Which have been some examples of successful forms of development in Rwanda?

PF: If we look at the development of its economy, it has growth rates of almost 7% per year. In terms of governance it has also achieved one of the best performances in Africa. It has managed to push back corruption to one of the lowest levels in the third world. It is one of the safest countries in all of Africa. It has also managed, very importantly, to fulfill most of the millennial development goals, which means that growth will also reach the broad population: mothers, children and so on. Of course there are also problems, but where are there none? Overall, my government thinks it is a good model of economic development.

Why should Europeans care about what happens in Africa?

PF: Africa is so important for us. It is Europe’s neighbour. As we can see, everyday more African migrants are coming by boat. It affects us immediately. This is why I think Europe and Germany are heavily committed to working with Africa.  Africa of course is a continent in transition, which has many challenges. So I think it would be important that we work with Africa on the basis of equal partnership, especially through African partners. It is always a bit difficult to have unilateral interventions on another continent, but we have African countries which possess quite capable security structures. I also welcome the commitment of the Canadian government to engage Africa more.

What do you think would be the best way to approach this peace and security engagement with Africa?

PF: To achieve peace and security, the best way would be to team up with African countries which have a good military and well-functioning police forces. We need to work together with them on the crisis areas that we have on the continent. So there are missions in South Sudan, Mali, Central African Republic and Eastern Congo. We have so many areas of conflict but I think that some countries have the abilities and capacities to be partners to Western countries operating on the continent.

I suppose that one issue that can arise when we want to work with countries is that we have to contend with their established forms of governance that are not necessarily democratic. How does Europe and the rest of the West juggle the issue of encouraging stability yet not condoning authoritarianism?

PF: On the one side, we cannot condone dictatorships and authoritarian systems which abuse human rights. On the other side, of course, you see authoritarian countries which are stable. I think the important thing is to encourage these countries to commence a process of transition toward more participation and democracy. History teaches us that harsh dictatorships will eventually fail and this leads to chaos, anarchy or revolution. So actually, for all these dictatorial regimes, it should be in their long term interests to commence a process of transition. This is where our role can be: offering our experience as an example. If you look at Eastern Europe, it went through processes of transition 25 years ago. Overall, it’s a process which will take time. There is of course no instant democracy. This is the role that we would need to play in Africa and other parts of the world.v

How do you think this could this be applied to the conflict in Syria?

PF: This is very difficult to say. Syria is a tragedy. There are too many players that are pursuing their interests there. It’s a big mess. I can only say that we need to look at a way forward that avoids the deaths of civilians. Hopefully, by next year we can find some way forward.

One of the most significant consequences stemming from the Syrian Civil War has been the refugee crisis. Germany was subsequently hailed as a model for tolerance and “welcome culture” in its efforts to accept the 1.5 million refugees that came. What do you think influenced Germany’s actions?

PF: If you look at any country, you cannot take its present situation and isolate it from its history. Germany is, of course, the product of its history and of the activities of various social or political influences. If we look at First World War, Second World war and the Holocaust, it was a very difficult history. Therefore, in Germany, we have a common consensus that we have a special responsibility in whatever we do in our country, in Europe, or globally. We have a special commitment to act responsibly, sustainably, and to contribute to global peace and security.

Even though this is quite an admirable thing, we have still seen that a portion of the German population does not agree with the actions taken by Merkel and her government. In Canada we are hearing about the emergence of various far-right political entities. Can you talk little bit about that?

PF: You are referring to the AFD. It is a legal and constitutional political party on the right end of the political spectrum, and it had been reviewed by our courts. I wouldn’t necessarily call it radical because it still operates within the bounds of the German constitution, which does not allow political parties that are extreme or militant.

Of course, it is normal for people to worry and feel uncertain if conditions change or the societies are in transition. People react to these changes very differently. This can somehow reflect in opinions that aren’t really mainstream. It could be radical right or radical left. In a certain way, this is a normal thing that any society will experience once there are fundamental and big external shocks. It may be political, economic or social or whatever. The essential question is, how will the German society deal with this?. This is a process which is ongoing in Germany right now. All the political parties are aware of the challenges ahead and that we have to deal with it. I think we Germans are quite thorough. We are not friends of quick fixes or rushed solutions. We are looking at the situation, study it, and we will then think of a solution that will encompass everybody.

Secondly, we as Germans like to work in the framework of consensus. We don’t like to have small majorities. We would like to establish a broad consensus and use this as a starting point to deal with whatever needs to be done.