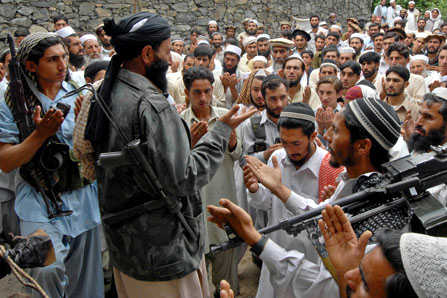 It was last year that the Taliban in Afghanistan reached out to ISIS and urged it towards moderation by “avoiding extremism”. Coming from the Afghan Taliban these statements were laughable for many, but in actuality indicated severe rifts between the two insurgent groups. By April 2015, both groups reportedly had declared jihad on one another in Afghanistan.

It comes as no surprise that ISIS and the Taliban have come to blows in Afghanistan. As ISIS alienated and clashed with rebel factions in Syria, including the al-Qa’idah affiliate Jabhat al-Nusra, it has mirrored that same methodology in Central Asia. Abu Muhammad al-Adnani, the group’s official spokesperson, announced in January ISIS’ expansion into the Afghanistan-Pakistan (AFPAK) region by way of its Khorasan shura (consultative council). Khorasan is a region which spans across Afghanistan, Pakistan, Iran amongst others. ISIS’ Khorasan project is led by former Tehrik-e-Taliban Pakistan (TTP, Pakistani Taliban) members. Most of its recruits have come from Pakistani militant outfits. As the Pakistani military operated to rid North Waziristan of militant elements, many of them abandoned their individual groups and came under the umbrella of ISIS. Only a handful of Afghan Taliban have joined the ranks of ISIS. Even the Pakistani Taliban from whom majority of ISIS recruits originate, being an al-Qa’idah affiliate in the AFPAK region, rejected the “self-professed Caliphate” in a 60 page exposé.

“In the land of Khorasan, there are people who claim to be fighting in the path of Allah and call themselves mujahideen, in reality, they are friends of the Pakistani intelligence. We have asked these people to repent. If they fail, our fighters should show them no mercy.”

The Khorasan shura has indeed delivered on this statement. Clashes between ISIS and the Afghan Taliban are becoming a common occurrence. Recently, as Taliban militants were retreating from a firefight with the Afghan government in Nangarhar province, they were ambushed by ISIS militants who beheaded 10 of them. Just as in Syria, ISIS is not yet concerned with government forces, but rather has kept other rebels and civilians in its crosshairs. By implementing its rule in the territories it controls, and causing attrition to other rebel groups, ISIS seeks to establish itself as the monolith in the AFPAK region through which it can expand its control and influence in Central and South Asia. It seeks to overcome the divide between the Afghan and Pakistani Taliban, both of which are invalid in the eyes of ISIS due to their region specific nature. Thus the name, Khorasan shura.

Interestingly, in what seems to be an effort to redress the fact of ISIS’ radical ideology being cultivated in their eastern neighbour, Iran has stepped up and has been supplying Taliban commanders in their struggle with ISIS. The circumstance seems out of place as the Taliban are Sunnis and have killed many Hazaras who are Shi’a, the co-believers of Iran. This newfound relationship is purely based on pragmatism. The Taliban seek to maintain power within their region, while Iran seeks to neutralize an upcoming threat from the east. Iran’s predominantly Sunni Balochistan province is a region of unrest, exposing it even remotely to ISIS would create a very tangible internal security problem for Tehran. For the Iranian government, it seems, the saying goes “better the devil you know than the devil you don’t.”

The Taliban has controlled Afghanistan for a period of time, and engaged in pragmatic politics in doing so. ISIS on the other hand is heavily rooted in its ideology, which guides its decision making and rationale. If the Taliban is offered an opportunity to cooperate in the region, it will take it; whereas ISIS has declared that anyone who is not with it, essentially is against it.

The attitude of ISIS has been demonstrated in the Middle East and it will surely export this to the AFPAK region. Although both the Taliban and ISIS have consistently targeted civilians and neither of them is “good” in comparison to the other, one is domestic to Afghanistan and has little interest outside of it, whereas the other is bent on a trans-border project connecting the AFPAK region to the Middle East and further. At this point both Afghanistan and Pakistan need to work harder and smarter in countering this rising threat before it can gather steam by winning the allegiance of many Taliban outfits in Afghanistan and Pakistan. Iran can become a partner in this issue as well. The success of this project can bring stability to the region as well as help rein in a growing ISIS and a fracturing Taliban.