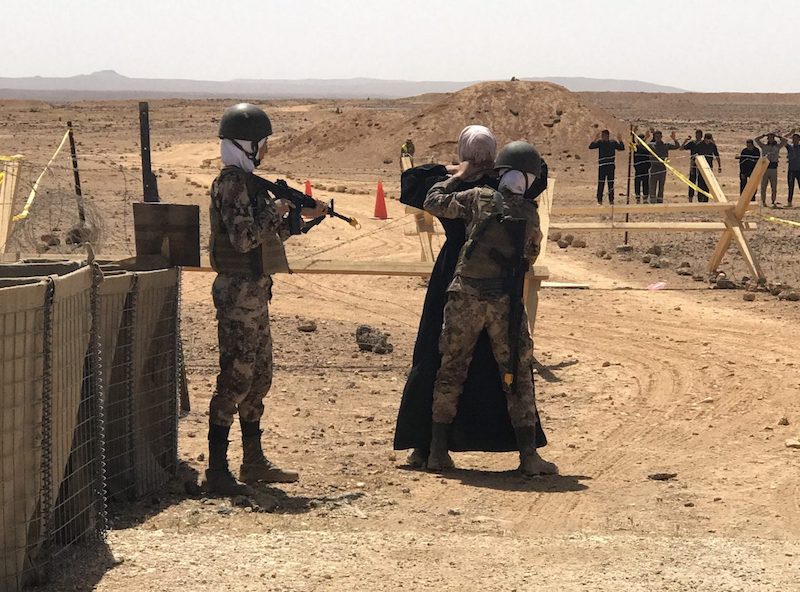 Military culture across the world has gone through significant shifts. The male-dominated institution has made important strives in the last 20 years with regards to gender equality. In Canada, women have been participating in Canada’s military history for the last 100 years, but it was not until the year 2000 that all restrictions were lifted, for instance giving women the right to serve on submarines. As of January 2014, 14.8 percent of the Canadian Armed Forces was made up of female employees. Similarly, in France, the percentage of women in the military is 15 percent. Amongst NATO allies, the statistics seem to be similar. In the United Kingdom, women make up 10 percent of the armed forces and in 2018 the Royal Marine Commandos opened applications to women for the first time. Currently, many NATO ally countries such as Canada, the UK, and the United States are facing a recruitment crisis. Addressing gender equality in the armed forces could potentially ease this crisis and simultaneously make the forces stronger.

For instance, at the height of the Afghanistan war, local Afghani females were more receptive to give female officers information and intelligence in areas of operations. Consequently, female soldiers went into these towns, villages or cities to talk to local women to gather intelligence and build relationships on the ground. As such, the importance of including women in security institutions has become a top agenda item for governments and international organizations such as NATO. NATO has demonstrated its commitment to this initiative by implementing United Nations Security Council Resolutions on Women, Peace and Security . Resolutions 1325, 1820, 1888, 1889, 1960, 2106, 2122 and 2422 acknowledge the importance of full and equal participation of women in conflict prevention.

At the 2014 Wales Summit, NATO recognized the importance of considering gender perspectives throughout NATO’s core goals of “collective defence, crisis management and cooperative security”. As such, NATO and its partners acknowledged the significant importance of ensuring diversity and the participation of women in security institutions. In line with Resolution 1325, NATO and partner country Jordan have cooperated in a capacity-building initiative to develop servicewomen in the Jordanian Armed Forces. Jordan III Trust Fund aims at achieving 3 percent female representation in the Jordanian Armed Forced in an effort to offer women with wider employment opportunities and diversifying participating. Jordan III was launched in March 2014 and has been extended until December 2019. During the launch, the ‘Teaching Gender in the Military Handbook’ was translated into Arabic in an effort to develop servicewomen and acknowledge their roles in peace and the security sector. The two NATO countries leading the project are Norway and the Czech Republic while donations and contributions have come from 11 member states.

The Jordan III Trust Fund will support the Jordanian Armed Forces through the execution of three objectives. These include, “Supporting an Action Plan, Enhancing Training Centre Infrastructure, and Enhancing Education and Training”. The Action Plan will support the Jordanian Armed Forces in reviewing the strategy in line with NATO policies. The policies will support The Directorate of Military Women’s Affairs and help the Directorate develop policies, develop Gender Advisors, and create a harassment reporting mechanism. Part two of the project aims at reconstructing the current Centre for training. Revitalizing the current training centre infrastructure will enable a greater accommodation of female military trainees, more staff and greater effectiveness through modernization Moreover, the renovations will increase the annual output of trained servicewomen by 25%. Finally, Jordan III will support enhancing education and training. These enhancements include analysing and applying appropriate amendments to the current training courses which will require including gender perspectives in female and male training. In May 2017, the Jordanian Armed Forces included their first gender awareness course in military training, which will be further expanded upon. Additionally, NATO will support the Centre to achieve the status of a “NATO School Partnership Training and Education Centre” so that selected courses in the centre can be NATO- accredited.

NATO offers various cooperation mechanisms to partner countries and encourages the implementation of the United Nations Security Council Resolutions on Women, Peace and Security. Jordan III will provide a leading example of a partner country in the Middle East region that is committed to diversifying military culture by expanding opportunities for women. In addition to NATO’s efforts, Canada has also contributed greatly to female engagement in the Jordanian Armed Forces. In 2018, a small group of female Canadian Armed Forces members were dispatched to Jordan to provide training to the Jordanian Armed Forces Quick Reaction Force Female Engagement Team.

Introducing a framework and curriculum on gender perspectives into military training and education can only ensure a more harmonized culture within the military. Additionally, integrating women in the peace and security sector not only advances gender equality but increases operational efficiency. For example, recent studies from Harvard Business School and MIT demonstrate that “group intelligence” of a group rises when women participate. In addition, women bring a unique level of “social sensitivity” which can be relevant to the local populace in a conflict zone. Conflict zones are more complex now as a majority of battles are fought in populated areas and diverse forces can address these sensitivities.

The treatment of women in the armed forces and the culture of the institution is but one example of other areas that will take time to change. Change is possible and this can be done by installing mechanisms to report sexual harassment and emphasizing gender perspectives in training and education. While the Jordan III Trust Fund signals greater representation of women in institutions, it is only one step towards greater international gender equality.