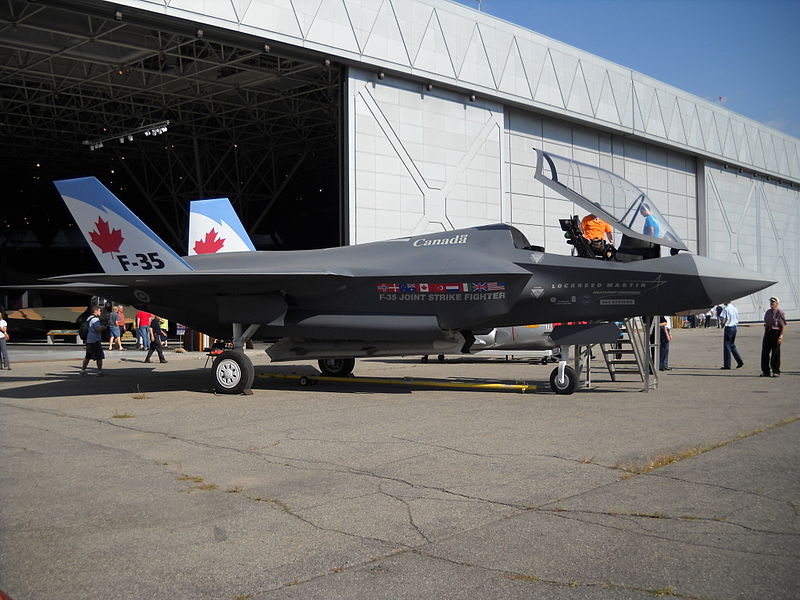 When the Canadian government’s crowning achievement in military research and development is what it didn’t do, you can be forgiven for expecting it to approach the task of equipping its armed forces with the wisdom accrued from past failures. Unfortunately, even this assumption has been proven whimsical. Ottawa’s handling of military procurement over the years has been a cavalcade of inefficiency.

Take the most recent instalment in this saga, the Canadian government’s approach to the F-35 Lightening II. This fifth-generation fighter by Lockheed-Martin has features that specifically equip it for the twenty-first century: stealth technology, electronic warfare systems, and interoperability. The aircraft is the product of a multinational effort set into motion by the United States in 1994 to develop a multiuse fighter that fulfills the roles traditionally assigned to separate types of military aircraft in separate branches of the military – ergo, a “joint-strike fighter”. In addition to the United States, Canada and seven other partners have contributed to the program over the years. Their respective industries have received contracts related to the production of the aircraft, resulting in millions of dollars worth of business.

To be sure, the history of the F-35 program is hardly seamless. It has been beset by cost overruns stemming from Lockheed-Martin’s “concurrent” method of producing the aircraft, meaning the jet is being tested at the same time that it is in the production phase. This has resulted in frequent delays, as the aircraft has been subject to periodic redesign. Yet, notwithstanding these hiccups, many NATO allies and associate partners have climbed on board with procuring the F-35 for their respective air forces, but Canada is late to the station once again. In 2010, the Conservative government announced plans to purchase 65 units of the aircraft, but that plan was scrapped.

Naturally, the biggest concern for Canadian politicians has been the cost of the F-35, an issue that is inextricably embedded in Canadian electoral politics. Already in 2012, an auditor general report threw cold water on the government’s plans by predicting major unforeseen hikes to the purchase cost, forcing even Conservatives to distance themselves from the deal. Since then, the myth of the overwhelming expense of the fighter has been a recurring trope in Canadian political discourse. In truth, the cost of each F-35 is decliningand is expected to drop from about 100 million U.S. dollars per plane to about 80 million by 2020. This drop could continue as the production rate of the aircraft rises. Moreover, costs can be offset to a large degree by contracts awarded to Canadian industries involved in the aircraft’s production.

It may surprise Canadians to learn that Canada has already committed 500 million tax dollars to the development of the F-35. This has put Canada in the awkward position of having a place at the F-35 development table, but not reaping its direct benefit – a new state-of-the-art aircraft. This is yet another example of a problem endemic to the Canadian national economy: Canada is an extraordinarily innovative country that, unfortunately, all too often fails to exploit the fruits of its own ingenuity.

Commentators also cast doubts on the F-35’s speed and manoeuvrability, but this entirely misses the point.  ‘Top Gun’-style dogfights are a thing of the past; now a fighter’s advantage comes from avoiding threats altogether, which the F-35’s stealth technology and state-of-the-art detection systems allow it to do to an inimitable degree.

The most far-fetched objection to the F-35’s suitability to Canada is the claim made in a report by the think tank, Canadian Centre for Policy Alternatives (which was audited by the CRA for alleged partisan scholarship), that the jet’s single engine leaves it vulnerable to bird strikes – as if that is a uniquely Canadian threat. Although Canadian government statistics note that the rate of bird strikes is higher in Canada than in the United States, the statisticians attribute this discrepancy to the greater frequency with which incidents are reported in Canada, not to a numerically higher rate of incidents. Furthermore, of those major aviation accidents in North America caused by bird strikes that resulted in heavy losses of life, all of them happened over the continental United States. This remote possibility has not stopped the U.S. government from ordering almost 2500 F-35 aircraft. Norway, another northern nation with its own problem of bird strikes, has also been undeterred from outfitting its air force with the state-of-the-art jet.

In the end, it is safe to suspect that the F-35 has been the victim of the partisan nature of Canadian armaments procurement. So Canada is now stuck with a fleet of CF-18s that go back to the early 1980s, that have already undergone expensive upgrades to keep them flying, and that might require additional upgrades to keep them flying into the 2030s. These will still have to be replaced, now at a cost of perhaps as much as 19 billion dollars – far more than the 14-16 billion originally planned for with the 2010 F-35 purchase.  In the end, that replacement aircraft will likely be the F-35 anyway. As a stopgap until then, Canada has set aside 5-7 billion dollars to purchase 18 used “Super Hornets” – essentially souped-up CF-18s – from Australia. The reason Australia is getting rid of these fighters is so that it can refit its air force with the more effective F-35s.

So what is the takeaway from this story?

Suffice it to say that the whole mess Canada’s jet procurement process is in right now could have been avoided if the Government of Canada had stuck with the original plan and purchased the 65 F-35s it said it would back in 2010, instead of playing politics with it. This missed opportunity is even more regrettable in hindsight now that the F-35 has come down in price. Instead of waiting for 18 used Australian throwaways to shore up the geriatric F-18s it has to keep in service now until 2032, the Royal Canadian Air Force would likely have its first deliveries of shiny new F-35s by now.

The F-35 is a truly intra-NATO effort. Even those non-NATO countries involved in its development are partners associated with the alliance. This project was a golden opportunity to help further standardize the equipment used by NATO members. By failing to take the initiative and, perhaps, a little bit of worthwhile risk, the Canadian government has thrown away an opportunity to give Canada full interoperability with other NATO members who are purchasing the same F-35 aircraft, which will use the same munitions and the same software.

Responsible policymakers in the Canadian government need to cast their sights beyond the horizon of the next election and onto the backdrop of the larger strategic considerations that need to go into military procurement. The decision to equip the Royal Canadian Air Force with the F-35 was too important for partisan politics, bargain basement bartering, or fatuous excuses about bird strikes. The government is not just letting down the Canadian people. It’s letting down our allies.

Photo: A mockup of the F-35 Lightning II with RCAF insignia sits on the tarmac of the Canadian Aviation and Space Museum at Rockliffe Airport in Ottawa in 2010, when Canada was still expecting to take possession of the new jet, by Ahunt, via Wikipedia Commons. Public domain.