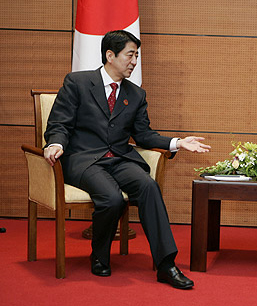 Article 9 of the Japanese Constitution outlaws war as a means to settle international disputes. According to the Article, the Japanese army has a peacekeeping mandate, and as a result the Japan Self Defense Forces (JSDF) was established in 1954. The JSDF, along with the United States military, has a main objective to maintain Japan’s basic defense ability and exercise peacekeeping missions domestically and globally.

In July of 2014, Japanese Prime Minister, Shinzo Abe and his cabinet approved a reinterpretation of Article 9 that would allow Japan to exercise the right of “collective self-defense” and exercise military action if any of its allies are attacked. This constitutional reinterpretation may seem to be a minor change in regional security in the Asia-Pacific region, however, it is a dramatic alteration for international peace and order

Abe’s constitutional reinterpretation will have important and beneficial outcomes for its military allies. The U.S. would no longer be a single, legitimate force governing the security and order of the Asia-Pacific. Together the U.S. and Japan would cooperate and update the framework of governance in the Asia-Pacific and largely strengthen the East Asian power structure that keeps China at bay. Japan and the U.S. will be able to oversee the revised Guidelines for Defense Cooperation, which will create a solid basis for more effective and credible cooperative structure under the military.

In Japan, opinions on the constitutional reinterpretation are not generally positive. According to a poll conducted on July 2, 2014, by Japan’s largest national daily newspaper, Yomiuri Shimbun, the Japanese public was divided on the issue of constitutional re-interpretation. 51% of Japanese citizens did not support’s Japan’s limited exercise of its collective self-defense, and only 36% did.

The execution of two Japanese hostages by ISIS may serve as a catalyst to Japanese public opinion on constitutional reinterpretation. Unlike the West, where there is a shared sympathy to the hostage situations, it is less so in Japanese society. At the early phase of the hostage crisis, Japan’s online commentators photoshopped the ISIS terrorists, showing there was no sign of seriousness to the crisis. Japanese online commentators even denounced the two hostages’ actions of going to Syria as irrational and inconsiderate. The Japanese general public also thought it was the hostages’ own actions that put them in a dangerous situation, which was seen as troublesome to Japan as a whole because it drew the nation into irrelevant international conflicts that were thousands of miles away in Syria.

Even with the harmful consequences of the hostage crisis, the reinterpretation offers a chance for Japan to positively expand its military to protect its security interests and defend its allies. Without real armed military, Japan cannot do much if it involves itself with the possibility of war with other states. Overall, Japan’s constitutional reinterpretation signifies an important shift from post-war pacifism and a lack of military sovereignty, to greater militancy when engaging in the international community.

Angel Yen is currently a third year undergraduate student at the University of Toronto. She is pursuing a double-major in political science and media studies. Her academic interests include writing and reading, with a focus on social issues and politics, the Asia-Pacific region, global businesses and economy dynamics, and the impact of culture and traditions on national politics. In the future Angel hopes to pursue a career in law or television. She is fluent in English and Mandarin. View all posts by Angel Yen →