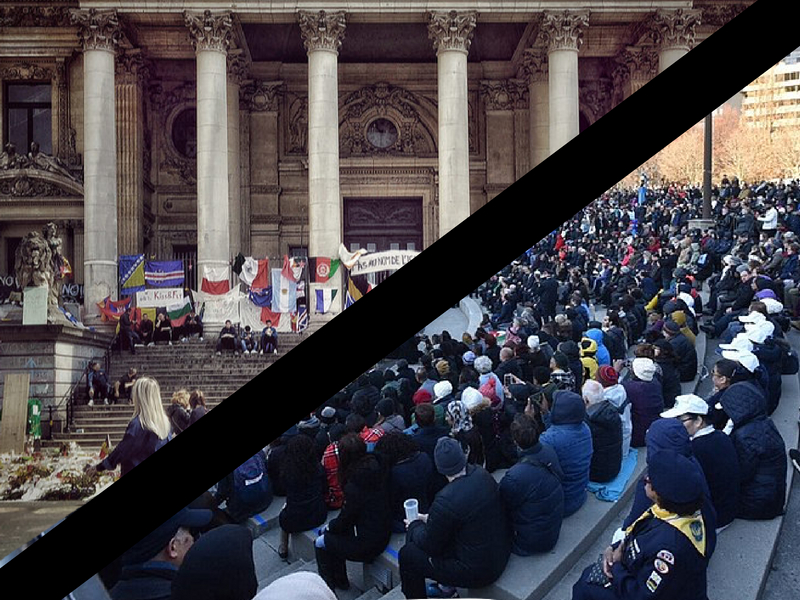 In the wake of the Toronto and Belgium attacks, consideration of gender in random public attacks has become prominent in our discussions on terrorism. Program Editors of the NATO Association community discuss what considerations should fall into account when we characterize acts of terrorism, and how we should define these recent events.

The definition of terrorism is the unlawful use of violence and intimidation, especially against civilians, in the pursuit of political aims. Under that definition, the Toronto attack would not qualify, but the Belgium attack would, and I agree with that differentiation. The motivation for the Toronto van attack was vengeful spitefulness over the attackers own insecurity as a man who has struggled romantically and sexually, whereas the Belgian attacker had a clear ideology and political aim he wanted to emphasize and work towards, even at the expense of his own life if it came to that, and especially through the means of causing violence.

The definition of terrorism is not too narrow, but its application is. The problem is gravely evident in North American mainstream media, where media outlets have forgotten the definition of terrorism and seem to only apply it to anything that relates the religion of Islam, whilst ignoring other applications. Although it is true that Islamic extremism is a huge issue for the world at large to deal with, it does not hold exclusivity rights over the prevalence of terrorism, with much of that also being able to be attributed towards far-right extremism and white supremacy (especially in the United States, but applicable to situations in Canada and Europe as well).

Nevertheless, the common denominator between these two instances of terrorism or violent attacks is the fact that men committed them. So while I disagree that the definition of terrorism should be expanded to include factors such as gender, I do believe that there is also a wider issue that does not relate to ideology, but to toxic masculinity that societies as a whole should come to terms with; that men find violence to be an acceptable solution, whatever the problem may be.

Most people don’t know what terrorism actually is. This is largely due to the media’s treatment of the topic and because of the word itself. People don’t think of the political aspect when they hear the word “terrorism”—they think of terror. Take the recent restaurant bombing: the signs pointed to a personal attack, but people on social media (including on our posts) insisted that it must be terrorism. This suggests that the public’s understanding of terrorism is too broad.

But I would also argue that our legal understanding may be too narrow in some instances.

Consider the van attacks in Toronto. It looks as though the perpetrator posted online about an “incel rebellion”, with “incel” referring to a member of a misogynistic online community. You can’t get more political than a rebellion. Yes, the attack was out of hate towards a particular group of people, but that doesn’t preclude a political aim. After all, hate and politics are often intertwined. From that post, it seems the attacker had a vision of a world he wanted to create—twisted, discriminatory, and violent, but a clear goal nonetheless.

Some people say that Toronto wouldn’t qualify because the goals in question were too amorphous. They say that the incel community, unlike, say ISIS, has no set doctrine—the people encourage one another in their views, rather than directly teaching them—and so it doesn’t count as terrorism.

But terrorism doesn’t always have a concrete source. The terrorist in Belgium was not a member of ISIS sent abroad. He was radicalized in jail. And when attacks have occurred in Canada and the United States, such as the 2014 attack in Ottawa, the terrorists were only inspired by ISIS. Just like the attacker in Toronto, they were indoctrinated indirectly. All of them had clear political goals. Why isn’t that enough?

There is a popular misunderstanding that words have fixed definitions that supersede practiced language. People believe that dictionaries dictate the meanings of terms, yet a word’s meaning is demonstrably dictated by popular usage. The significance of this distinction with respect to terrorism and gender is that, when deciding whether we ought to expand the definition of terrorism, we don’t need to be too preoccupied with whether our new definition is logically derivative of our old one. A new definition can be created, justified, and disseminated solely because of its sociopolitical utility. Instead of asking “Does our new definition fit within our old definition?”, we should ask ourselves, “How can we successfully redefine this term to achieve our goals?” Currently, the popular definition of terrorism requires that violence be unlawful and have political aims. Those who want to expand terrorism to include gendered violence seem to have two options: (1) to either remove “political aims” from the definition of terrorism, or (2) define gendered violence as inherently political.

Let’s assume our goals are reducing harms to people (a fair assumption). I’m not sure if I would support either option. I’m concerned that the removal of “political aims” seems to make “terrorism” a too-general term. It could conceivably apply to any mass violence. Over time, that dilution may weaken the language needed to describe politically-motivated violence, such that those conversations lose clarity and take on unnecessary inertia. For similar reasons, I’m against broadly defining “political”, too. If many things take on this definition, then what does “terrorism” and “political” mean? How does the state effectively warn citizens about terrorism, as it is understood today, without worrying about inertia coming from linguistic dilution? This inertia may seem trivial to some, but it’s this same lack of effective language that’s motivated the question of redefinition in the first place. If choosing between the two, I feel that more harms would be mitigated by having clear terms for Islamic terrorism than this specific kind of gender-based violence, at least in this point in time.

Redefining terms might also be a bad idea from a practical standpoint. From my observations of their forums and social media, the far-right seems to perceive social progressives as weaponizers of language, and may interpret a redefinition of “terrorism” as an attack on them. The enforcement of new language/definitions requires a broad buy-in from society and strong sociopolitical backing. If this redefinition is perceived as a partisan project, this not only sabotages things from the outset, it also exacerbates an already significant problem in which partisans inhabit separate ideological and linguistic realities. These harms are significant and probably outweigh the benefits of our redefinition.

I’d rather have us come up with a *new* term (or terms) that encapsulates cases like the Toronto van attack. It would be great to devise some neologism designed for bipartisan palatability, and which recognizes the horrors of these cases — “gender-based (or other identity-based) mass violence that is relatively apolitical” — without encroaching on conventional definitions.

As it stands now, the uniform definition of terrorism refers to the use of violence against institutions or civilians for political purpose or gain. The Belgium attack can easily adhere to the standard definition of terror, as the murderer had a clear affiliation, ideology and focus. By contrast, a clearly mentally ill man who had frustrations about his sex life committed the van attack in Toronto. This man was not directly affiliated with any group or substantial ideology, and threw a violent temper tantrum because he couldn’t conform to social norms. This was not a terrorist attack; in the same way that mass shootings committed by frustrated teenagers in the United States are not terrorist attacks. Despite our government being able to recognize this distinction, how terrorism is defined is not static across administrations or political leanings. In North America, left leaning institutions are much more likely to adhere to the uniform definition of terrorism, while the alt-right has a very narrow interpretation.

The current United States president is famous for ignoring anti-Islamic sentiments expressed by his constituents. When three Americans bombed a Minnesota mosque in 2017, the president was completely silent on the issue. By contrast, when an ISIS-inspired man drove a truck into a group of civilians in New York, the president was quick to condemn the act as terror. In effect, the definition of terrorism is not too narrow, but how it is interpreted often is. In Canada, our liberal government adheres to the standard definition, with Justin Trudeau quick to label the 2017 Quebec Mosque shooting as terror in the name of a white supremacist ideology. The same cannot be said of the alt-right, who seemingly apply the definition of terrorism to any violence committed in the name of Islam. This narrow interpretation is used by organizations like the Republican Party to justify unlawful restrictions on Muslims, with Trump’s “Muslim Ban” subsequently able to gain traction and support from his constituents.

Overall, the current definition of terrorism is not too narrow, but the ways in which terrorism become interpreted often are. Expanding the definition of terrorism to include gender will not solve issues with interpretation and understanding. However, greater attention does need to be diverted to the prevalence of targeted violence committed by males. The Toronto Van Attack was committed by someone with a fragile conception of masculinity, and is something that is not being discussed enough in our mainstream media.

Terrorism has a very clear definition: the use of unlawful violence and intimidation for political gains. The term itself has unfortunately become synonymous with religious, mostly Muslim, extremism over the last decade. The media is now ready to use the term every time a person of colour perpetuates an excessive act of violence in the West. This is dangerous as it not only stokes racial tensions but also elevates actions by people who are driven more by mental health issues than by an overwrought belief in a political cause.

This is my hesitation in expanding the characterization of terrorism to include gendered violence; by doing so you create a banner under which disillusioned, frustrated young men can gather. Calling desperate acts that are driven purely on wounded emotions ‘terrorism’ legitimizes them, as terrorism implies planning and adherence to a larger picture. In contrast gender based attacks are caused by people who cannot see the forest for the trees; believing their bruised egos and inability to get what they feel is “owed” to them justifies ruining other peoples lives.

Instead of expanding the concept of terrorism we should work on paring it back. The term has become too sensationalized and is now used as an excuse to splash acts of violence across the front page. Even though the perpetrators are vilified they are still glorified as their names and faces are circulated and discussed. This infamy appeals to isolated individuals who are looking for a cause to add meaning to their lives. While any public attack is horrible, automatically associating the phrase terrorism with it throws a blanket over actual root causes.

Photos: Toronto Strong Vigil at Mel Lastman Square – 2018, by Andrew Scheer via Wikimedia Commons. Licensed under CC0 1.0 and Commemoration of the victims of the terrorist attacks in Brussels, Belgium, at the Bourse- 14 April 2016, by Paolo Margari via Flickr. Licensed under CCO 2.0.