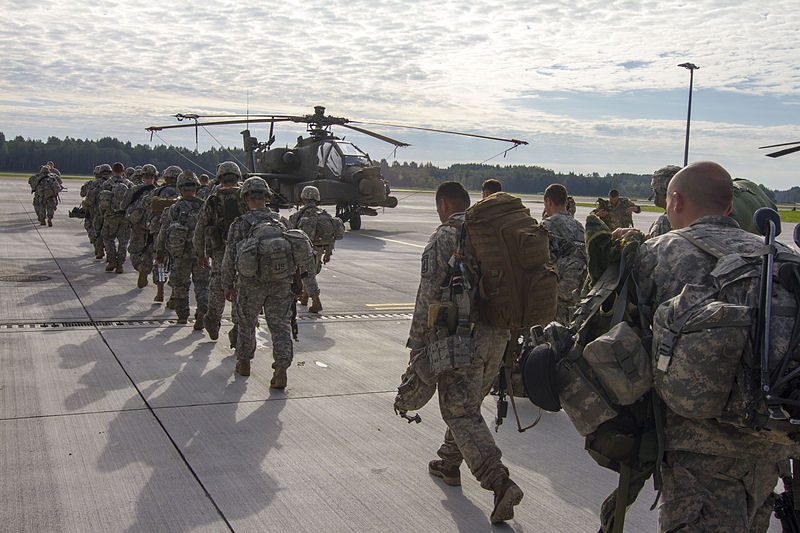 As Canada prepares to accept a leadership role in NATO operations in Latvia in 2017, it is apparent that Western powers prioritize military strength as the primary method to counter Russian aggression.  Modern security threats are a nuanced consolidation of variables.  The dichotomy of ‘guns or butter’, or the debate between military force and economic development, is representative of NATO’s mission in the Baltic States. Canadian-led military forces may prevent external Russian incursions but responsibility rests with the individual Baltic States to rectify any concerns from ethnic Russian populations within their borders.

National security concerns over Russian diaspora became prominent once analysts alleged that Russian hybrid warfare techniques would foment separatist sentiments in populations in Russia’s Near Abroad.  After the annexation of Crimea and the ongoing conflict in southeastern Ukraine, such circumstances did not seem far-fetched.  It is assumed that Russia’s northern neighbours are the next targets of its perceived neo-imperialism due to their relatively small geographic size and substantial ethnic Russian populations.  (Estonia 24 %, Latvia 26 %, and Lithuania 6%)

While NATO membership and aid from fellow members in the Alliance alleviates external security concerns in the Baltics, internal difficulties are another matter. Many ethnic Russians are not well assimilated and there are identifiable ethnic grievances. For instance, in Latvia, Russian minorities encounter high rates of unemployment, prejudice, and status as non-citizens.  Non-citizens enjoy many of the same rights as Latvian, citizens but they are ineligible to vote and are barred from receiving government pensions. Latvian authorities have attempted to rectify the predicament of non-citizens within its borders by easing language requirements and costs of citizenship testing.  Nevertheless, ethnic Russians contend costs remain high, especially for those struggling with unemployment, and thus citizenship remains unattainable. These accusations increase in potency as Latvia continues its struggle with Russian language sources of propaganda.

Estonia exhibits similar inequalities, however the outcome is different. The small Baltic state’s ethnic Russians contend with unemployment and non-citizenship in sizeable numbers, but there is less concern over a consolidation of Russian diaspora. Russian minorities enjoy a sense of security, living side by side with their Estonian neighbours, and a higher standard of living than they would expect in their ethnic homeland.  Further, minorities in Estonia have the opportunity to freely contest any of the grievances, such as underemployment or wage disparity, and Estonian media addresses these concerns.  In both cases, this is the point where the butter in the ‘guns or butter’ dichotomy takes precedence.

The situation in the Baltics is vastly different from that in Ukraine, and that should be reflected not only in NATO operations, but also in how international partners tackle Russian aggression in the region.  Though there are obvious social, economic, and developmental injustices faced by Russian-speaking populations, these problems have not resulted in the organization of Russian diaspora and the promotion of separatist rhetoric.  Nevertheless, it is these ethnic grievances that experts anticipate that the Russian Federation will exploit in order to cause political dissent and instability.  While a Russian invasion into the Baltics would be an unlikely and imprudent decision, political instability caused by ethnic grievances of considerable minority populations is sufficient to destabilize internal politics.  Therefore, it is important for states, such as Estonia and Latvia, to make investments in assimilating their Russian-speaking populations.  It is a wise strategy to make efforts to alleviate difficulties faced by Russian ‘compatriots’ living abroad before they become potentially unmanageable political problems.  As well, a higher quality of life and integration are prime deterrents against Russian propaganda seeking to discredit Baltic governments.

The Canadian contingent’s foremost responsibilities are to deter any signs of Russian aggression and to ensure that the Baltic States’ sovereignty remains unchallenged. This particular NATO mission will undoubtedly address any concerns regarding external security. On the other hand, the connections fostered between the applicable states and Canadian envoys offers yet another way to safeguard regional security. Canada has valuable experience in developing programs that seek to remedy ethnic grievances faced by various demographics. For instance, shared knowledge could result in ways to make citizenship and language testing more accessible to those non-citizens who wish to pursue that avenue. As well, economic and educational opportunities for the underemployed can be profitable.  If welcomed, Canada can be a leader in military affairs and devising socially progressive ways to cement better ethnic relations in the Baltics.  If these particular internal issues are addressed, the anxieties over Russia using its expatriates to destabilize Estonia, Latvia and Lithuania lessen considerably.

As Canada prepares to lead a major NATO operation in the Baltics, Estonia, Latvia and Lithuania must consider how they will counter apparent Russian aggression domestically. Security cannot be achieved by relying on military strength alone.  It will be a finite balancing act of protecting borders while at the same time charming the hearts and minds of some long time Russian residents; some lacking in citizenship, employment and benefits.  In the case where ethnic grievances present the prospect of transforming into a major political issue, social development must enter into national security planning also. Canadian involvement in the Baltics provides yet another occasion for Canadian knowledge to positively influence European security as well as long-term ethnic relations. In the end, security is not a decision of ‘guns or butter’ but rather finding the applicable fusion of both that addresses the specific needs of a region or state.