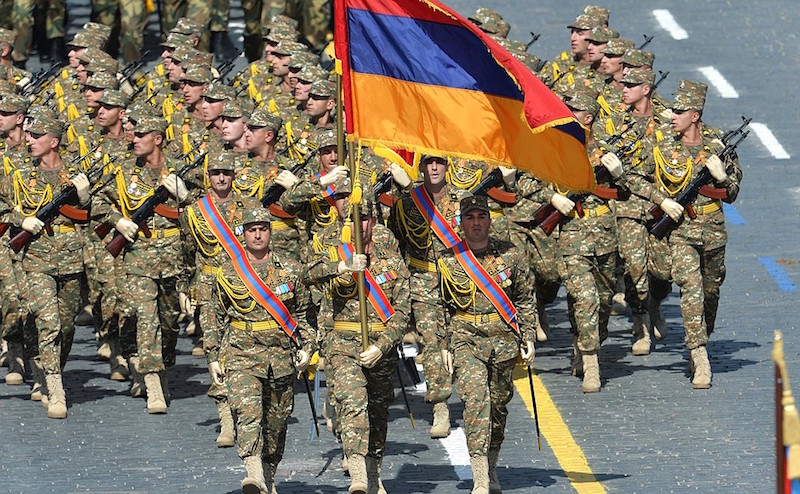 The collapse of the Soviet Union left behind a number of frozen conflicts, including a tense relationship between Armenia and Azerbaijan. The Nagorno-Karabakh War in the early 1990s between these two countries over the disputed region of Nagorno-Karabakh has been considered the deadliest post-Soviet conflict as it resulted in widespread ethnic cleansing and left approximately 30,000 people dead. The main cause of the war was Nagorno-Karabakh’s attempt to separate from Azerbaijan and join Armenia. While the war officially ended in 1994, Armenia and Azerbaijan have, on numerous occasions, engaged in combat, often resulting in the deaths of dozens of soldiers. In 2016, a border skirmish became the deadliest incident since the end of the war, killing approximately 300 soldiers on each side within a four-day period. Since then, tensions have continued to rise, with Armenia threatening to recognize Nagorno-Karabakh as independent even though it is still considered part of Azerbaijani territory. With slowing economies plaguing both countries, the nationalist fervour that comes with war may be used as a means to increase support amongst Armenian and Azeri citizens for their respective governments.

Another war over Nagorno-Karabakh is especially worrisome given the opposing interests of regional actors. In Armenia, Russia has a large military base that supports nearly 3,000 troops, which Russia sees as crucial to countering NATO’s growing influence in the region. While the extent to which Russia would intervene to protect its military base is uncertain given that defence of Nagorno-Karabakh is considered Armenia’s responsibility, Russia’s involvement in the Syrian conflict, which includes protecting its naval base in Tartus, suggests that Russia might assist Armenia should war erupt. Meanwhile, Iran remains concerned about the effects that a conflict would have on its ethnic Azeri population, which is larger than that of Azerbaijan — 16 to 30 million versus nearly 10 million for Azerbaijan. Should conflict emerge between Armenia and Azerbaijan, nationalist fervour and propaganda in Azerbaijan may influence the ethnic Azeri population of Iran to separate and join Azerbaijan. Such an event might inspire other secessionist movements amongst Arab, Kurdish, and Turkmen populations in Iran. Consequently, Iranian support for Armenia would be crucial to ensure that Azerbaijan does not become powerful enough to promote secession within Iran’s borders.

Azerbaijan also has a number of strategic partners. In order to counter Iran’s alliance with Armenia, Israel has allied itself with Azerbaijan. During the Nagorno-Karabakh war, Israel supplied (PDF) weapons to Azerbaijan and has been quick to condemn Armenia for recent clashes, even when Azerbaijan was most likely at fault. In return, Azerbaijan has provided Israel access to its military bases — most concerning for Iran as they could be used to carry out a military strike against Iran’s nuclear facilities. Azerbaijan is also crucial to Israel’s energy security, as Israel receives approximately 40% of its oil imports from Azerbaijan.

Turkey is another key ally of Azerbaijan. This alliance is largely a consequence of animosity between Turkey and Armenia as a result of the former’s denial of the Armenian Genocide, as well as the perception of a shared culture due to Turks and Azeris being both Turkic peoples. When the Nagorno-Karabakh war broke out between Armenia and Azerbaijan, Turkey supplied (PDF) the latter with weapons and closed its border with Armenia. To this day, the border remains closed and no formal diplomatic relations exist between Turkey and Armenia. Turkey has also helped Azerbaijan in the development of oil pipelines (PDF) and railways connecting the two countries.

In addition to creating tensions amongst regional actors, a future conflict between Armenia and Azerbaijan also has worrying implications for wider regional security.  Conflict would create an outflow of displaced people, further exacerbating the ongoing refugee crisis. The majority of these refugees would likely flee to the neighbouring countries of Iran and Turkey, both of which are already heavily burdened with refugees from Syria and Iraq. Conflict over Nagorno-Karabakh could also inspire violent secessionist movements among ethnic groups opposed to Azerbaijan’s denial of Nagorno-Karabakh’s right to self-determination. This was witnessed during the Nagorno-Karabakh War, which invigorated a separatist movement among Azerbaijan’s ethnic Lezgin minority who were highly opposed to fighting in the war. While much of the Lezgin separatist movement was peaceful (PDF), it took a violent turn when Lezgin nationalists bombed the metro station of Baku, Azerbaijan, killing 27. While such violence was limited afterwards, a future war could witness far greater violence among Lezgins and other ethnic minorities should the Azeri government be incapable of controlling the country.

A war would also create an energy crisis for countries in the region dependent on regular imports of oil and natural gas from Azerbaijan, such as Georgia and Turkey. Both these countries already lack stability, with the areas of Abkhazia and South Ossetia in Georgia being controlled by Russia since 2008, while over the past few years Turkey has been witness to a coup d’état, numerous terrorist attacks, and continued insurgency in Kurdistan.

Perhaps most worrisome for the Euro-Atlantic is the effect that such a conflict would have on maintaining influence in the Caucasus. A conflict would be a lost opportunity for cooperation between the Euro-Atlantic and Armenia. Armenia has increasingly expressed its interest in joining the EU and has cooperated on numerous occasions with NATO. Yet, should conflict break out, Russian assistance to Armenia would likely turn Euro-Atlantic organizations away.

Consequently, it is vital that countries in the Euro-Atlantic assist in resolving the Nagorno-Karabakh conflict. If tensions flare up, conflict could worsen the refugee crisis, invigorate other secessionist movements, threaten energy security, and could result in the destabilization of two strategic allies — Georgia and Turkey, and the loss of a potential one — Armenia.

This article is part one of a two-part series on the Nagorno-Karabakh conflict. Part two covers how countries in the Euro-Atlantic can help to resolve the conflict.

Photo: Armenia soldiers at the Russian military parade to mark the 70th anniversary of Victory in the 1941–1945 Great Patriotic War (2015), by Kremlin via Kremlin.ru. Listed under Public Domain.