Results of the Meeting in Kiruna, Sweden

The Arctic Council, which was established in 1996 by eight states with a clear stake in the region (Canada, Denmark, Iceland, Finland, Norway, Russia, Sweden and the U.S.), has developed from a relatively obscure intergovernmental forum into a strategic association. Membership in this organization in the form of observer status is coveted by states even if they fall well outside the bounds of the region. This was seen most clearly in the realization of the bids for observer status made by China, India, Italy, Japan, Singapore, and South Korea on May 15, in Kiruna. This date also marks Canada’s assumption of the rotating Chairmanship of the Council.

The Arctic Council addresses a number of key issues and strategic considerations, including environmental preservation and pollution, climate change and the accelerated melting of Arctic ice, concerns over diminishing freshwater resources, competition for the region’s oil, gas, and mineral reserves, conventions on Arctic navigation, and the shipping of goods. It also aims to strike a balance between sustainable business development on one hand and the preservation of indigenous communities, their cultural integrity, and social welfare on the other. The issues mentioned are only the most salient geopolitical matters among a broader spectrum of concerns over the Arctic.

The convergence of all of these issues and the competing interests of states in the region have tempted many to conceptualize the emergence of a “new Great Game” over the acquisition of resources and the assertion of sovereignty in the Arctic. While the potential for regional conflict surely exists, it is unlikely, at least in the foreseeable future. The mission of the Council is to promote peace, cooperation, and security in the region, and provided that the permanent members uphold their recognition of the Exclusive Economic Zone (EEZ), they are likely to conform to the stated goals.

Why do the issues of membership, and particularly the acquisition of observer status matter? Swedish foreign minister, Carl Bildt, described the utility of recognized observer status as promoting the pre-eminence and legitimacy of eight permanent Arctic member states. One can also see that observer states hope to utilize their status to influence the permanent members, thereby projecting their “out of area” interests into the Arctic sphere. Of course, this influence can only be realized by lobbying the permanent members of the Council.

A kind of symbiotic relationship exists between Arctic members and observer members, as the former derive legitimacy from the latter and the latter are given a stake in issues otherwise beyond their reach. This relationship, however, is unequal, as it is the eight permanent members that hold decision-making power, a key competency not extended to observer countries. Furthermore, there are limits and obstacles to cooperation. For example, Canada is currently locked in a trade dispute with the European Union (EU) over seal products, and consequently, it has blocked the EU from entry to the Council as an observer. This marks an instance in which Canada is taking measures to protect the interests of its Aboriginal peoples. 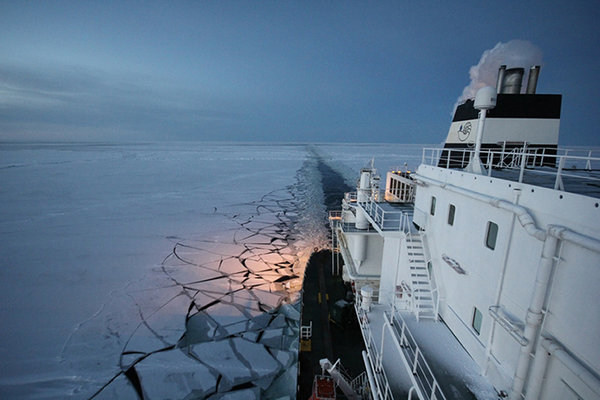 Canada will hold the rotating Chairmanship of the Arctic Council until 2015.

Canada’s Chairmanship and the Future of the Arctic

Canada is set to hold the Chairmanship of the Arctic Council until 2015. Canada’s Minister of Health and Arctic Council chair, Leona Aglukkaq, asserts that despite the admission of the new states as observers, the Council was formed “by Northerners, for Northerners.” Aglukkaq is Inuk and represents the riding of Nunavut in the High North. For Aglukkaq, “Northerners” denote both Canadian state and indigenous interests. Why are states from the “Global South” seeking membership in a geographically bound organization like the Arctic Council? Quite simply, China and India, along with other emerging powers, have sought membership to claim a stake in the scramble for the commercial and geopolitical opportunities to be found in the Arctic.

There is a notable disjuncture between the agendas of the Canadian government and of indigenous citizens and civil society groups. For instance, Prime Minister Harper’s government has focused on defence and military priorities vis à vis the Arctic, whereas indigenous groups are concerned with food security, health care, and education. Yet, this disjuncture is not necessarily mutually exclusive, as many Inuit realize that if Canada is to protect their societal interests, the government must protect its jurisdiction in the North. Inuit support of this position can be seen in their active participation of Arctic patrols.

In addition, the military considerations of the Canadian government are at odds with the issues that environmental groups deem worthy of attention and support. In turn, indigenous peoples and environmental activists also have conflicting agendas. Indigenous groups accuse environmental organizations of pushing campaigns that ultimately block economic development and the improvement of social conditions in northern communities.

Canada must attempt to address the various interests and discordant voices, both among the members of the Council and within the domestic sphere. The Chairmanship of the Council provides many opportunities, but also presents a substantial catalogue of challenges. Through the Chairmanship of the Arctic Council, Canada can lead discussion to resolve conflict among states in a peaceful, multilateral forum.

Angola: Where Does The Money Go?

Andi Asimetaj examines hows corruption has spread to all levels of governance in Angola.

Canada, NATO, and the Responsibility to Protect

Emily Robinson looks at relations between Canada, NATO and the Responsibility to Protect doctrine.