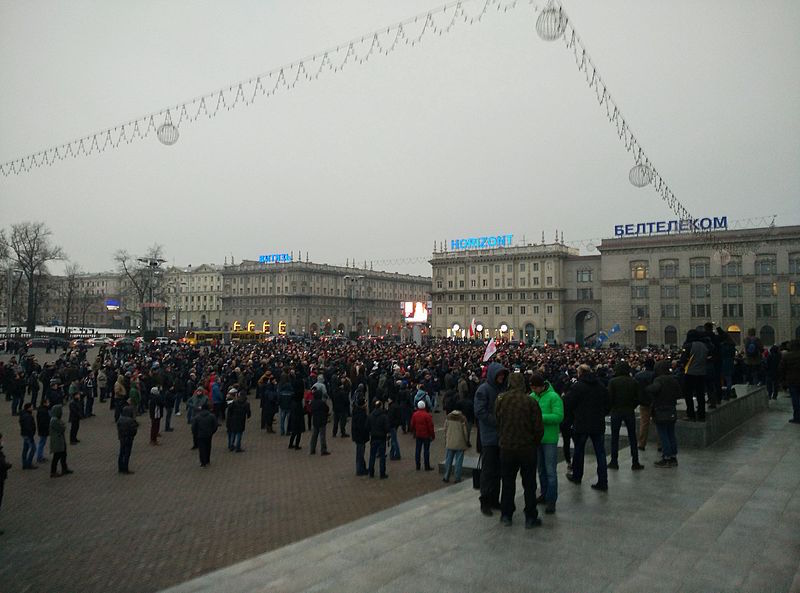 The criminalization of poverty is a familiar complaint across the globe. It is manifested by the state in various methods such as the imposition of fees, fines, or taxes on the unemployed. Recently, Belarusian citizens have taken to the streets to voice their opposition to legislation that sought to collect a substantial levy on those considered to be “social parasites.” Protests occur periodically in Belarus, but these demonstrations were different as they resulted in perceptible changes in government policy and they were not dismissed by force. As this is unusual for the President Alexander Lukashenko’s administration, one must question the overall political strategy held by the current government.

The foundation for these widespread protests were set into place on April 2, 2015 when President Lukashenko signed Decree № 3 into law. Decree № 3 became known as a tax on social parasitism as it required unemployed Belarusians, who had not paid state taxes in six months, to pay a fine of US $245. This was considered to be a hefty amount as the average Belarusian monthly income is approximately US $380. It would place an even heavier and inequitable burden on hundreds of thousands of Belarusian citizens struggling to enter into the workforce. Further, no one really knew where hundreds of thousands of new jobs would emerge in a Belarusian economy hindered by an ongoing recession. Individuals already registered with the state labour authorities as unemployed (“officially unemployed”), those working in Russia, housewives and small-scale farmers were the primary groups exempted from paying fees. In return, these groups would have to perform various forms of community service or face more fines and two weeks in jail. Legislation such as Decree № 3 was reminiscent of Soviet social policy where parasitism was a criminal offence which is also reminiscent that Lukashenko continues to rule with a Soviet ethos.

Payment of the “social parasite” tax was due on February 20, 2017 and as that time drew near, voices of opposition became louder and more organized. Belarusians turned to the Internet and social media to assert their dissatisfaction, and opposition movements united to collect thousands of signatures for various petitions. In January 2017, opposition organizations planned the “March of Angry Belarusians” to be held in Minsk on February 17, 2017. Two thousand protesters, mostly apolitical ordinary citizens, attended the rally and setting the stage for subsequent demonstrations. Three thousand Belarusians took the streets two days after in various cities around the country, Brest, Vitebsk, Grodno, Mogilev and Gomel. A week later, another three thousand protesters marched again in Vitebsk and Brest but, they were joined by others in Baranovichi and Babruysk. At that point, it became clear that the protests were domestic in their origins and having occurred in important regional cities, they reflected a national attitude against Decree № 3.

After weeks of vocal opposition, on March 9, 2017, Lukashenko announced that the tax on social parasitism had been placed on hold until further analysis. Nevertheless, he cautioned that it would still be implemented in 2018. This is the point where the political situation in Belarus becomes intriguing. Lukashenko, famous as “Europe’s last dictator”, rarely concedes to public pressure, especially from protests. His concession is a veiled acknowledgement that domestic grievances are at the heart of the resistance rather than the Russian subversion he blamed originally. Further, in past protests, the Interior Ministry has been swift in their use of force against public demonstrations. The reluctance to turn toward violent police crackdowns during this round of national protests is representative of the Belarusian authorities’ ambitions to foster a closer relationship with the West, who would find such behavior intolerable. Additionally, Belarusian citizens continue to push for greater reform and the complete repeal of Decree № 3.

Belarusians returned to the streets to protest in large numbers in Babruysk, Maladzyechna, Rahachow, Orsha, Brest and Pinsk from March 10 to 12, 2017. While complaints over the social parasite tax remained, opposition messages demanding the ouster of Lukashenko began to permeate the crowds. A key difference from the earlier protests is that in these demonstrations, the police began to make arrests. The EU, UN, US State Department and human rights organizations have voiced their concerns over the apprehension and detention of these peaceful protestors. Has Lukashenko’s fear over the stability of his rule cost him burgeoning ties with the West yet again?

As the situation in Belarus remains fluid, one does not know which political strategy will emerge from Minsk. A strongman leader acquiescing to protesters focused on a rousing social issue such as the criminalization of poverty presents unfavorable optics. If Lukashenko submits to the will of the people and annuls Decree № 3, it will be the strongest sign of weakness to emerge from his administration. The administration in Minsk will have to devise a clever plan to make the tax on social parasitism disappear rather than discredit it outright. Secondly, if the protests continue, it is a safe assumption that Lukashenko’s tolerance will wear thin. As long as the protests remain peaceful and do not develop into a national movement, the authorities will conduct arrests rather than engage in a strong use of force. If Lukashenko is faced with this decision, he will have to consider the importance of developing strong Western relations versus solidifying his grasp on power and humbly turning towards Russia again.

In 2016, the Russian Federation expressed interest in developing its own form of a tax on social parasitism. Russian authorities stated that they wanted to study the implementation and results of Decree № 3 in neighbouring Belarus before making a decision. Those considering such legislation have observed that taxing the unemployed is a calculable way to foment social turmoil and seeds of political instability. Belarus has found itself in a unique political situation where a small victory by its citizenry could provoke demands for more change at the risk of disconcerting the foundations of a strong-armed leader who learned that his citizens will resist burdensome decrees.

Photo: Protests in Belarus (2017), by Liashko via Wikimedia. Licensed under CC BY-SA 4.0