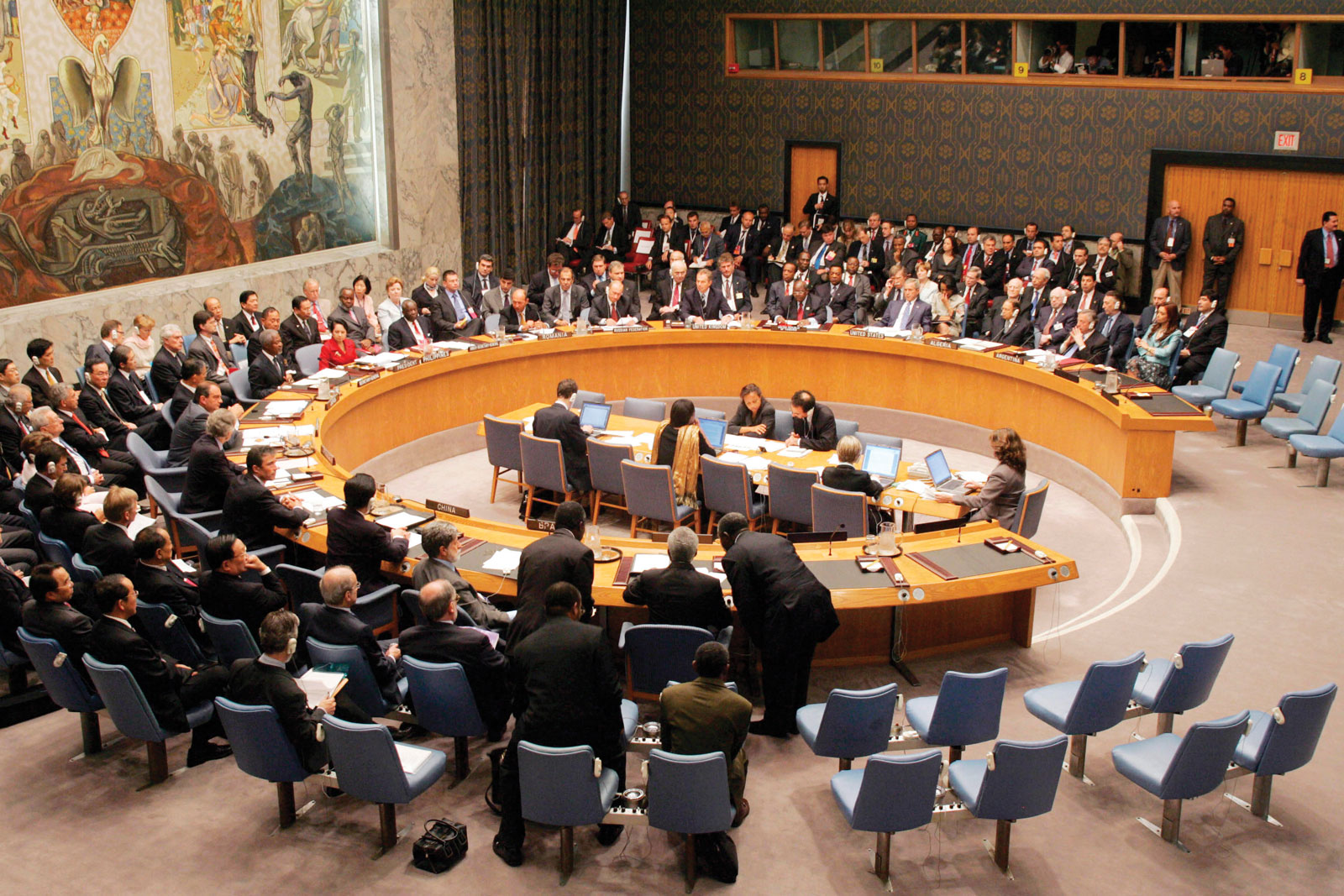 What Threats Are International Institutions Unprepared For?

The problem with most global organizations created in the post-WWII era is that they were predicated on a completely different version of global society than we have today. They are equipped to deal with grand politics and large nations quibbling with each other, but less so for LDCs (least developed countries). Take the IMF, for example. It disregards local circumstances with its conditionalities and undermines domestic institutions because the foundation on which it is built on is to lend to countries that have acceptable collateral to bargain with. Countries like Greece are prescribed austerity measures that they cannot recover from because they do not have the required financial system to make a comeback. Different circumstances require different solutions.

Likewise, the nature of modern, often stateless, threats makes it difficult for the UN and NATO to be particularly effective. Cyber warfare is highly problematic due to its intangibility and the lack of global consensus on policies and standards. The guerrilla warfare that plagues LDCs is similarly difficult to combat due to the lack of traditional diplomacy that NATO and the UN were built to expect.

Although these types of organizations are sufficient to an extent when dealing with traditional threats, such as Russian aggression, the nature of global society today is such that problems must be examined on a deeper and more personal level. These organizations must modernize if they hope to evolve with the changing of the times.

No, it’s not a new version of the board game. Existential Risk, the kind that places the continued survival of humanity in question, rates little concern from institutions and governments. It can be difficult to take these seriously because they have not yet been witnessed – a large asteroid strike, an uncontrollable bio weapon, a rampant artificial intelligence – yet any one of these occurrences would be sufficient to sweep our feeble defences away and wipe out a large portion of humanity.

Translate these into numbers, and the risks become clearer. An asteroid merely a kilometer across would release around 46,000 megatonnes on impact, sufficient to annihilate the entire west coast of the United States, or most of the Eastern Seaboard. Naturally, agencies like NASA and the ESA attempt to detect potential threats, but they concede that most debris striking Earth is undetected before entering the atmosphere.

Artificial intelligence (AI) receives more headlines, yet even less action, with only a few small non-profit research institutions working on how to reduce this risk. The potential benefits of a friendly AI are incalculable, yet even a small error in the wrong place could cause extinction. Our continued survival merits rather more attention than this.

Inez Treffers: Get the Balance Right

It has been argued for decades by economists like John Maynard Keynes that politics and economy should be interconnected and continuously interacting with each other. Presently, we see that rapid changes in transport, communications, and technology have had great influence in our world economy and have even outbalanced markets. In order to regulate these developments and create more balance in the world economy, states have created institutional frameworks like the World Bank and the IMF.

However, these frameworks are not ready to regulate economic development effectively. The current situation in Europe proves that financial issues cannot be solved without political decisions. At the same time, states are obstructed in effective political decision making by the frameworks they have created. In the IMF, for example, a single veto from the United States can prevent decisions being made at all. These constructions are preventing international financial institutions from operating on a supranational level.

It is hard to predict what will be produced by new shifts in the world economy. The recent drop in China’s stock market shows how quickly one development can send the global market into a spin. It seems that keeping a balance in the world economy and preventing another financial crisis from happening is nearly impossible.

International organizations are essentially unprepared for any upcoming threat, given that their respective structures undermine any rapid decision making and deployment.

During the Rwandan genocide, for example, the local UN outpost did not receive the needed reinforcements it requested despite evidence of a planned and imminent massacre. In Srebrenica, Dutch peacekeepers watched helplessly as Serbian militias took away Muslim men and boys to be shot and dumped into mass graves. In both these and other cases, the failure did not lie with the commanding officers on site; the officer in Rwanda called his superiors, only to find that no one on the other side of the line responded, while forceful UN action to prevent the atrocity in Srebrenica would have violated Rules of Engagement (ROE).

The issue is of a bureaucratic nature, as ROE are made by people in suits rather than those in uniform. Bureaucracy slows down reactivity and prohibits personnel from exercising their duty. As long as bureaucracy restrains the effectiveness of the peacekeeping corps and humanitarian aid programs, international organizations will continue to fall short in responding effectively to upcoming threats to global security and human rights.

In response to the deteriorating situation in Ukraine, NATO has increased large-scale deployments of military personnel in training exercises, such as Operation ALLIED SHIELD in May 2015. This has placed a significant strain on diplomatic relations with Moscow; as the European Leadership Network, a British think tank, has concluded: “Russia is preparing for a conflict with NATO and NATO is preparing for a possible confrontation with Russia.”

Both NATO’s overall strategic policy and current intellectual consensus are unprepared for the tacit reality on the ground. Russia has already undertaken a series of aggressive military incursions into countries that have aligned themselves with NATO, utilizing low intensity, asymmetrical warfare. Lacking a common threat perception among its member states, NATO’s current rules of engagement match unevenly against tactics that employ deniable assets: suspected but unconnected to any one state.

Even worse, disagreement among NATO member states has further reduced its operational capacity. Germany, which conducts extensive business with Russian company Gazprom, has argued against the further deployment of troops to the east. Greece has vetoed the extension of membership opportunities to Macedonia because of a dispute over its official name, the Republic of Macedonia. Perhaps most alarmingly, major NATO member states are against extending a preliminary membership action plan to Georgia because of fears of further antagonizing Russia. More than simply being unprepared for future crises, NATO is unprepared for the ones in which it currently finds itself.

International organizations, such as the UN, IMF, and NATO, often find conflicts as being solely charged by political or ethnic tensions. Yet threats on the horizon are not always politically, ethnically or culturally rooted. Many of them will stem from environmental damage and resource scarcity.

Much of the global economy is dependent on natural resources, at which point food security comes into play. The UN, NATO, and IMF must be better prepared to deal with a growing population with growing demands for food and other primary goods. With the demand growing faster than replacement of those resources, we could face a huge threat to human security.

A related pressing issue is the Israeli-Palestinian dispute and the possible fallout over fresh water. While the conflict between the two falls along political, geographical, and cultural lines, it also targets the water that flows through. It affects the economies and agricultural industries of both sides. International institutions must keep the cost of environmental damage in mind when discussing peace and security.

The continually increasing dependence on communications and Internet technologies means that the amount of cyber crime will inevitably increase. International institutions are not currently structured to handle the amount and severity of cyber crime coming in the future. The recent cyber attacks on the Canadian government prove how susceptible systems are to penetration. This can be further proven by viewing cyber attacks and intrusions globally in real time with the NORSE Attack Map.

Many of the issues arise from a lack of clear and concise responsibility on the part of both private and public entities. Private corporations control a large percentage of Critical Infrastructure systems and are often targets of industrial espionage. Conservative estimates have assessed that, globally in 2014, cyber crime resulted in approximately U.S. $375 billion in losses. If this was not enough, many of the Critical Infrastructure systems are obsolete. Supervisory Control and Data Acquisition (SCADA) systems are vulnerable to disruption and manipulation.

The damage caused by cyber crimes will continue to increase, and we have seen how impactful it can be, such as the cyber attacks Estonia and Georgia suffered in 2007 and 2008, respectively. Countries are not immune to the effects of cyber crime, much like their private counterparts. International institutions are largely ill-equipped for this challenge.