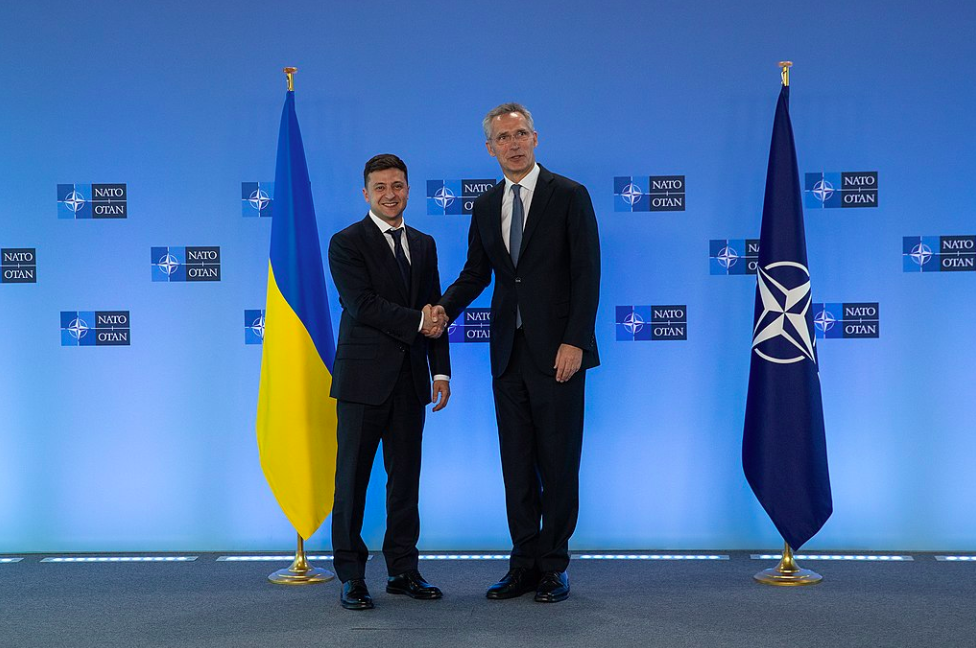 The second decade of the 21st century has been defined by the rise of political newcomers in Europe as mavericks like Emmanuel Macron, Beppe Grillo and Zuzana Caputova have successfully challenged incumbent politicians. Now, the club has a new member: the recently elected president of Ukraine, comedian Volodymyr Zelensky. He won the runoff election against incumbent Petro Poroshenko, who received just 24% of the vote. Zelensky’s election will certainly be an important factor in the implementation of the country’s Euro-Atlantic integration aspirations, which include joining NATO.

Zelensky is a 41-year-old native Russian speaker hailing from the industrial city of Krivoy Rog. He is best known for his lead role in the popular TV series “Servant of the People”, where he plays a teacher who accidentally becomes president. He has no government or military experience outside of the television screen. So, how did an actor end up as commander-in-chief of a country that has been at war for the past 5 years?

Part of the answer is that he is not Poroshenko. Although Poroshenko has done a good job of navigating Ukraine’s conflict with Russia and taking steps towards European Union and NATO membership, he has failed to implement his domestic reform promises. He came to power after pro-Russian president Viktor Yanukovych was ousted in the 2014 Maidan Revolution; consequently, the public expected Poroshenko to crack down on corruption, strengthen institutions and increase economic growth. While there were some positive changes, prominent officials charged with corruption were not imprisoned, reforms stalled and Ukraine continues to have the lowest GDP per capita in Europe, resulting in millions of Ukrainians leaving the country to find work. That said, the “not Poroshenko” theory only explains why someone would defeat Poroshenko. However, Zelensky was the only one who received more votes than the outgoing president in the first round (30% and 16% respectively). Clearly, there was something compelling about Zelensky’s own platform.

Zelensky was not a traditional candidate: instead of holding rallies and participating in countless debates, he gave shows around the country and interacted with his supporters primarily through social media. The untraditional candidate continuously criticized Poroshenko’s failure to deliver on his earlier promises. Zelensky’s status as a political outsider made his critiques particularly compelling and allowed him to differentiate himself from establishment politicians and businessmen like Poroshenko, a billionaire confectionary tycoon. The comedian argued that he is not part of the self-interested establishment that prioritizes the interests of corrupt oligarchs. He declared that he is committed to fighting corruption, improving the economy, pursuing Euro-Atlantic integration and implementing the Minsk agreements to alleviate the conflict in eastern Ukraine. On the other hand, Poroshenko campaigned on the slogan “Army, language, faith”. He appealed to the nationalist electorate in western Ukraine and focused on his foreign policy victories against Putin. Hence, Zelensky represented not just a fresh face but also an emphasis on domestic democratic development, which contrasted Poroshenko’s divisive nationalism.

Zelensky’s election also signals the failure of divisive tactics. Unlike most politicians, he did not exploit the linguistic, historic or ethnic divides that fracture the country. Doing so allowed him to win 24 out of 25 regions, which is very impressive considering the fact that voters are usually divided between the Russian speaking East and South that tend to be friendlier to Moscow compared to Western Ukraine.

Ukraine has been a valuable NATO partner since it became an independent state in 1991. The same year, Kyiv joined the North Atlantic Cooperation Council, followed by the Partnership for Peace program in 1994. Only 3 years after that, the NATO-Ukraine Commission was established. NATO has helped Ukraine with capacity building and development through numerous initiatives; Ukraine has cooperated with the Allies in areas including peace operations, defense and security sector reform and military exercises. Additionally, NATO has consistently supported Ukraine’s sovereignty and condemned Russia’s aggressive behavior, like the illegal annexation of Crimea. In 2008, NATO members agreed to the eventual membership of Georgia and Ukraine. Ukraine has been trying to secure a Membership Action Plan (MAP) for over a decade.

The outcome of the Ukrainian presidential election is significant for NATO for two principal reasons. First, the free, competitive and fair election upheld the Alliance’s commitment to “democracy, individual liberty and the rule of law”. This is a welcome sight considering many post-Soviet nations have seen the ballot box become an empty symbol of defeated democratic hopes. If implemented, his campaign promises will help Kyiv respect the rule of law and independent institutions; he has promised to take away the immunity of judges and members of parliament, increase budgetary transparency and create an effective team to investigate financial crimes. The chances of him accomplishing his goals seem promising; he has selected a strong team that includes former Finance Minister Oleksandr Danylyuk and former Minister of Economic Development Aivaras Abromavicius, who helped carry out substantial reforms under the previous administration. Moreover, his new position as president empowers him to appoint key posts like the Minister of Defense and the Foreign Minister, the heads of intelligence services, the prosecutor general and the military general staff. He has already nominated Vadym Prystaiko – who used to be the Ukrainian ambassador to Canada and most recently, Ukraine’s permanent representative to NATO – as the new foreign minister.

Second, and perhaps most important for the Alliance, Zelensky promotes Euro-Atlantic integration. Ukrainians have time and time again supported joining the Alliance, going as far as amending the constitution to make EU and NATO membership a key objective. On June 4 and 5, Zelensky met with EU and NATO leaders in Brussels, where he confirmed that Kyiv would prioritize implementing reforms necessary to join both organizations. NATO Secretary General Jens Stoltenberg welcomed the leader, thanking Ukraine for being a “highly valued partner” with a “strong commitment to international security.” He reiterated NATO’s support for Ukraine and stated that reforms to bolster the rule of law and tackle corruption are “essential to ensure security and prosperity for all Ukrainians and to bring Ukraine closer to NATO.”

However, there are some causes for concern. Zelensky’s lack of political experience and clear policy plans have led many to question whether he will be able to make serious reforms in the face of a strong Russia and powerful oligarchs. That being said, he has already hit back at Putin’s plans to make it easier for Ukrainians to acquire Russian citizenship and denounced the Kerch Strait incident. Zelensky’s business dealings with Ihor Kolomoisky, the oligarch whose channel hosts Servant of the People, have also raised eyebrows. Although the new president has tried to distance himself from Kolomoisky, an important test of Kolomoisky’s influence will be the fate of PrivatBank, a bank he co-owned before it was nationalized as part of the cleanup of the banking system led by then Finance Minister Danyliuk. Nevertheless, Zelensky seems to have retained people’s support thus far, with polls showing his party as the clear winner of the upcoming parliamentary election. While it is unlikely that Ukraine will join NATO anytime soon due to geopolitical tensions and certain NATO members’ warm relations with Russia, it is encouraging that Zelensky is committed to cooperating with NATO and working towards a MAP.