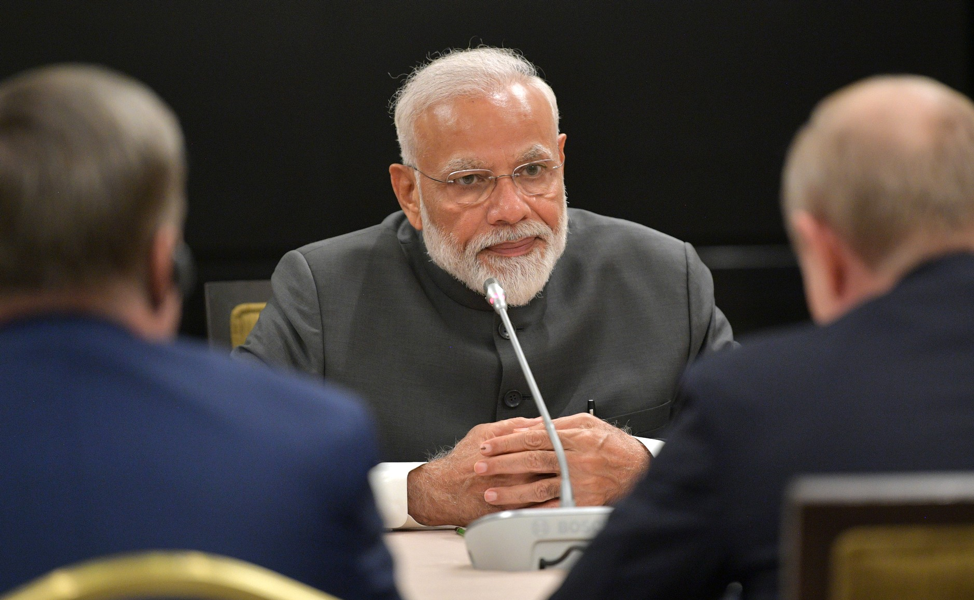 India has been long characterized as a land liberated from the confines of strict western logic and adherence to rational diktat. It is a country that exists beyond the neat boxes of ethnicity and religion, geography and civilisation. In many ways, India is an enduring impossibility; the hodgepodge admixture of a hundred languages, a thousand castes, and a million gods. And of course, one is always brought back to that phantasmic number – the human potential of its one billion citizens.

To marshal this radical diversity requires an exercise in moving beyond and between what makes sense – it is the twisting serpentine duality of Indian society that characterizes its politics, its faith, and its foreign affairs. Indian strategists perpetually wrestle with the aurochs and angels of this perplexing nature, struggling to provide a unitary explanation to that which often operates beyond it.

Of the many dichotomies of India, several can be used to chart the influences of its foreign policy since Independence in 1947. Its leadership has often found the country bound between the ancient and the modern, between the colonizer and the subaltern, and so too have they found themselves bound by the moribund trappings of Indian diplomacy. In regional altercations or principled disagreements with the powers-that-be of world politics, successive Indian Prime Ministers have been forced to weigh the efficacy of various methods of response: to engage in restraint or resolve, in clemency or calamity.

Regardless of their choices, it is a Vedic dichotomy that continues to stand above the rest in the course of Indian strategy – that between the scriptural concepts of Sattva, meaning the quality of goodness, of balance, of peace; and Tamas, that of darkness and inaction. How India manages this age-old equilibrium will go on to define its grand strategy in the 21st century. Moreover, it will impact the legacy of the recently re-elected Prime Minister Narendra Modi, who has been granted the trust of the electorate in carrying out his mandate over the next five years.

Take, for example, the transition from excessive moralpoliticking to the execution of machtpolitik in recent years. Before, where Nehruvian idealism may have stayed the hand of active response, Modi’s government has begun paying real heed to realist calculations in India’s strategic outlook. Failures to engage Pakistan diplomatically on the issues of cross-border extremism and terror-financing have engendered an Indian willingness to retaliate kinetically to asymmetrical transgressions. The highly-publicized surgical strikes at Uri in 2016 and the Balakot air strikes from earlier this year attest to this shifting paradigm.

In a world that is rapidly moving away from U.S hegemony, India is looking to redefine its strategic neighbourhood on more favourable terms. The intransigence of Pakistan means that India has begun to look eastward in its outreach to the Bay of Bengal, a transition exemplified by the invitation of BIMSTEC rather than SAARC leaders to Modi’s second inauguration ceremony. This is a natural extension of India’s ‘Act East’ Policy that seeks to facilitate a greater engagement with India’s historical partners in Asia, through both commercial and military means.

An uncertain return to the basis of multipolar competition provides both opportunity and challenges to the rising powers of the world, who must forge their own path to global order in the coming years. In the rush to constitute this new future, states like India have found a reassuring blueprint in the model of the long-ago past. Civilizational values and an emphasis on the subcontinent’s rich heritage, combined with the recognition of realist maxims, intertwine to form the new playbook of Indian diplomacy.

Prime Minister Modi has adeptly pursued the use of soft power and ancient linkages of history to harken back to India’s spiritual and mercantile traditions. Initiatives such as the UN International Day of Yoga provide an opportunity for India to flex its cultural muscle, as Indian embassies and consulates around the world are encouraged to host yoga events in a bid to burnish India’s global profile. In Afghanistan, investments in cricket infrastructure and the popularity of Bollywood movies have directly contributed to the generation of political goodwill towards India as a trusted partner in the Afghan peace process.

Just as China has begun to realize the utility of its Buddhist heritage in engaging with a vast swathe of Asian nations, so too has India begun to emphasize its own inheritance as the birthplace and original steward of the Buddhist faith. The continued refuge of the Dalai Lama and his government-in-exile in Dharamshala serves as a direct Indian appeal to followers of Tibetan Buddhism, and as a signal of defiance to Beijing. Beyond the realm of religious tourism, Buddhist education, and academic exchanges, India is intentionally setting itself up as a democratic foil to China in more ways than one.

In the transition back into a state of competition between the power centres of the 21st century, India is looking to carve out an autonomous strategic space therein that affords it regional hegemony in South Asia, and the ability to influence affairs far beyond its immediate reach. Even as it moves closer to the United States, India refuses to enter restrictive agreements or alliance systems that forego operational flexibility. This can be demonstrated in its acquisition of the Russian S-400 missile defense system despite American protest, and in its continued economic engagement with an Iran seemingly on the brink of war with the Trump administration.

Across Asia and the Indo-Pacific, India intends to carefully pursue a rivalry with China, without the baggage of China’s difficult diplomatic and political history. The buildup of security infrastructure along the tense borderzone of the Himalayas has already proved critical in seeing off Chinese incursions during the 2016 Doklam standoff over Bhutan. On the seas, the Indian Naval Service will continue to develop its bluewater capabilities with the construction of a third aircraft carrier in the next decade, preserving the current favourable balance of power in the Indian Ocean region. A commercial and military base race is underway across the region, with India focusing on ports in Oman, Iran, Mauritius, Seychelles, and in their own Andaman and Nicobar Islands territories in order to counter Chinese moves in Djibouti and elsewhere.

Across Central Asia, the Pacific, Africa, and the Middle East, India is in a struggle for influence against the other major powers of the new multipolar world system. It is a country undergoing a cultural resurgence, engaging in introspection on modern Indian values, and determinedly charting a course into the unknown waters that lie beyond the familiarity of American supremacy. Through marshaling and managing the many dichotomies that define the habitus of its society, India has begun to truly emerge with a new, singular purpose.

In Vedic philosophy, an individual – and even a civilisation – cannot engage solely in the virtue of Sattva or only in the chaos of Tamas. Rather, it is the passion and motion of Rajas, the final attribute of the three Gunas, that brings balance and serves as the actualizing vehicle for holistic living. Prime Minister Modi, with the recent appointment of career diplomat Subrahmanyam Jaishankar to the post of External Affairs Minister, has demonstrated his resolve for action, and his aspirations for a grander, more muscular Indian strategic outlook. Whether he can break free from the institutional lethargy of Lutyens’ Delhi, and cement the place of the ‘Modi Doctrine’ in Indian diplomatic history will be truly ascertained over the course of the next five years and beyond.

Featured Image: Prime Minister Narendra Modi meets with his Russian counterpart last month at the Shanghai Cooperation Organization summit in Bishkek, Kyrgyzstan. (June 13, 2019) via http://en.kremlin.ru/events/president/news/60747. Photo courtesy of the Office of the President of Russia.