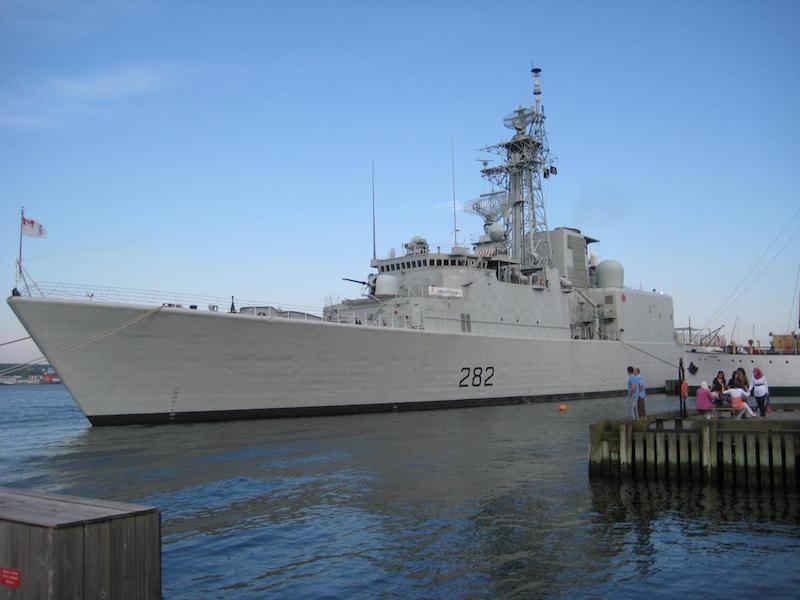 Last year, the Federal Government allocated $20.3 billion (0.99 per cent of GDP) for defence. If you have ever wondered where some of that money goes, look no further. Below is a list of some of the top projects that the Royal Canadian Navy (RCN) is currently funding.

1.) The Harry DeWolf-class Arctic Offshore Patrol Ship (AOPS): Canada’s new Arctic ambassadors. Former Prime Minister Stephen Harper’s Conservative Government had initially ordered eight ships to augment Canada’s Arctic capabilities, but this number has since been scaled back to five ships with the option of a sixth being built if there are no cost-overruns during production.

Irving Shipbuilding of Halifax, Nova Scotia, was awarded the contract in 2015, which is worth $2.3 billion. BAE Systems from the UK, responsible for supplying the main weapons system, has teamed up with Irving Shipbuilding. The total budget for the project is estimated at $4.3 billion, and includes maintenance for 25 years.

These ships are important because they will allow the RCN to operate on a continual and independent basis in the Arctic for up to four months. Furthermore, these vessels are equipped to travel through ice up to one metre thick, and will support the new Cyclone naval helicopters; functionality which the RCN sorely lacks.

2.) The Queenston-class auxiliary oiler Joint Support Ship (JSS) project: three new multirole naval vessels designed to allow the RCN to remain at sea up to six times longer and allow greater flexibility in sustained operations worldwide. The first of these ships is set to be delivered later this year, which is very good news considering that Canada has recently retired both of its supply ships: the HMCS Preserver and the HMCS Protecteur, and has been relying on its NATO allies for refuelling capabilities in the meantime.

Part of the JSS contract was awarded to Federal Fleet Services, Inc. of Levis, Québec. In order to deliver the first ship on time, the company has opted to convert a civilian cargo ship to the specifications outlined by the Navy. When completed, the company will lease the ship to the DND with crew and support for five years, costing taxpayers $587 million. There is another ship being built in Vancouver by Seaspan, but it will not enter service until at least 2020.

The project has attracted some controversy from Canadians in the shipbuilding industry regarding the company’s decision to outsource part of the construction to Almaco, which is responsible for building a major portion of the superstructure in Rauma, Finland. However, Peter Cairns of the Shipbuilding Association of Canada defends the decision. He argues that Canada’s shipbuilding industry has been allowed to atrophy for so long that a number of major components and expertise vital to the project can now only be found overseas.

3.) The Canadian Surface Combatant (CSC) air defence destroyer and general purpose variants: the project aims to rebuild Canada’s Navy by supplying 15 ships to replace its three aging Iroquois-class destroyers and 12 Halifax-class frigates. This is the keystone in Canada’s commitment to its National Shipbuilding Procurement Strategy (NSPS), which will contribute about 15,000 jobs across Canada, and provide an annual net economic benefit of about $2 billion for the next 30 years.

Construction is slated to begin in 2021, with the first of these ships scheduled to enter service in 2024. However, the RCN’s last destroyer is set to be decommissioned later this spring, and when that happens Canada will not have its own area air defence capabilities, and will need to lean on the United States and its NATO allies in the meantime.

The total value of the project could cost up to $40 billion for 15 ships, and not $26 billion as originally estimated. Critics argue that costs will only rise over time, and that even then it may not be sufficient to produce the full complement of naval vessels.

4.) The Maritime Coastal Defence Vessels (MCDVs): a replacement for the Kingston-class vessels currently in service. The RCN scrapped its original plan for a mid-life refit of the Kingston-class, opting instead to replace them entirely beginning in 2020. The Canadian Government has expressed an interest in ordering 12 of the multi-role, minor war vessels, which are capable of conducting coastal surveillance and patrol operations, as well as search and rescue, law enforcement, resource protection and fisheries patrols.

This article is intended to be part one of a three-part series highlighting all of the major procurement projects currently underway in all three branches of the Canadian Forces.