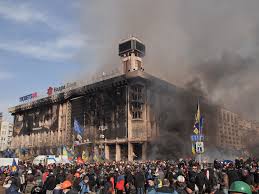 A new era began on March 19, 2014, the day when Russia deployed its elite troops to Crimea and staged a referendum to justify its illegal occupation. The sovereignty of an independent state was shattered in broad daylight. The day will go down in history as a day of infamy when humanity helplessly sat and watched the golden rule of international relations being shattered into pieces. The day will also be remembered as the moment when nationalism triumphed over common sense. Once again, humanity returned to the days when we were driven by emotions and hate, rather than rationality and mutual respect for one another. It is essential that the humanity recall the lessons of the twentieth century and confront the challenges head-on.

In Nationalism, the author Anthony D. Smith defines nationalism as “an ideological movement for attaining and maintaining autonomy, unity, and identity for a population which some of its members deem to constitute an actual or potential nation.” Nationalism is often divided into two category—perennial and constructionist. Perennial nationalism is based on ethnicity, and it leads to the foundation of the idea that a particular ethnicity has the right to reside in a land. Constructionist nationalism is the concept of ‘invented nation’. In this sense, nationalism is a product of social engineering carried out by the elites to create common identity among groups and gain public support for their political projects such as founding a new state. Although nationalism can be a force in maintaining unity and harmony, history has shown that those who use nationalist rhetoric with vile intention can easily transform nationalism into chauvinism.

The recent case of Novorossiya shows the most extreme case of nationalism transforming into patriotism and being utilized for a political purpose. It has demonstrated that the elites with vile intention can borrow elements of both perennial and constructivist nationalism to engineer a political project. The nationalistic frenzy that fueled the separatist movement in Crimea and Eastern Ukraine was driven by Russian elites who uphold Eurasianism.

Eurasianism is a political ideology that claims Russia must preserve the tradition of Eurasian nations including Slavs, Turks and Mongolians. But it has transformed into an idea that justifies Russia’s imperialistic ambition by putting forward the notion that the people of the former Soviet Union share a common culture, and so they must belong to the same political entity. In truth, Eurasianism provided an ideological justification for purposefully creating a new state.

Although Crimea and Eastern Ukraine have been the homeland of the Tatars and Ukrainians, Russia has justified its unlawful acts by emphasizing the false claim. They claim that the cities in the region were founded by ethnic Russians and the majority of the population in the occupied regions are ethnic Russians. The “Project Novorossiya” has left a dangerous precedence that a powerful state can stir up the sense of jingoism among the populace to justify its unlawful occupation of a territory in another country.

The case of Crimea and Novorossiya reflects the inconvenient truth that humanity is witnessing nationalism being applied to justify inflicting harm on other nations. Much of the woes in today’s world is the result of nationalism becoming a dominant dialogue in both domestic and foreign affairs. More often, nationalism becomes a roadblock in the path to finding peace among conflicting nations—both in East and West. The series of territorial dispute in South China Sea, the intense rivalry between Japan and China, and South Korea’s grievance towards Japan for the crimes of the past, poses significant challenges in maintaining fraternal relations among Asian nations. Rather than showing compassion for those who are desperate for help, the helpless ones are often ostracized in their new home.

People must recall the lessons of the twentieth century and find a dialogue that would allow the nations to overcome the sense of hostility. Recalling the lessons of the past and maintaining friendship among nations are essential in preventing the grave mistakes made by our ancestors in the last century. Too often our leaders have forgotten to pay equal respect to the wellbeing and the interest of other nations. The masses have been driven into frenzy by the nationalistic rhetoric, preaching hate to others. It must be acknowledge that the unsolved problems of the twentieth century remain relevant to the affairs of humanity today.

The challenges that humanity is facing today appear insurmountable because even nations that share common roots and identify themselves as “brothers” have engaged in bloody feuds.