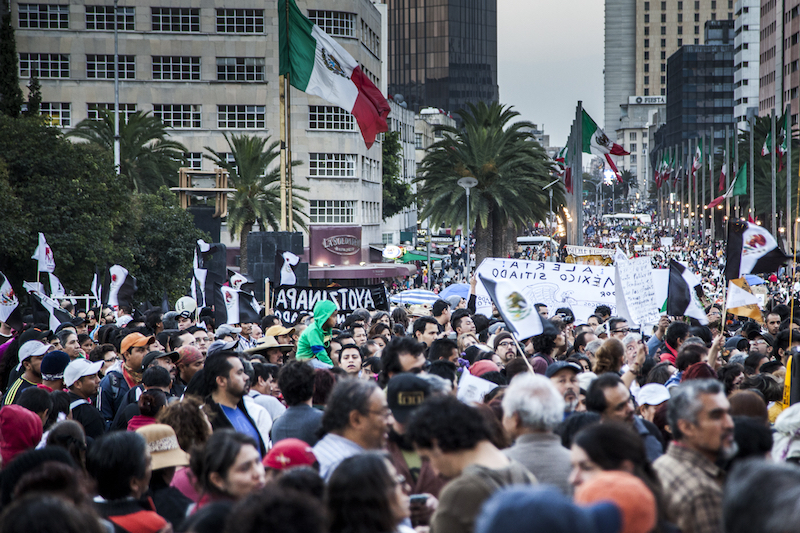 Judging from the photos of PM Justin Trudeau and Mexican President Peña Nieto out for a run together at the end of June, Canada-Mexico relations look like they’re still going strong. Indeed, for more than 70 years, Canada and Mexico have shared a close relationship through tourism, cultural exchange, and investment.

Fulfilling the long-lived friendship between the two countries, President Nieto’s visit was in advance of the Three Amigos Summit for the North American leaders. The results of the summit – Canada’s elimination of visa requirements for Mexican nationals by December 2016, and Mexico’s repeal of the ban on Canadian beef products – was publicized for its success

But Canada has long ignored a dire problem in Mexican domestic policy: human rights. The reason why Canada has yet to take a firmer stance is indeed political, both in terms of alliances and capacity.

Earlier in June, six people were killed in the Oaxaca teachers’ protests. Violent clashes between police and members of a radical teachers’ union, who had blockaded roads in southern Mexico, left more than 100 people injured on June 20. The leader of the union was arrested a week earlier, resulting in protests nationwide. More deaths occurred in July, as the teachers protested against the new education reform, which included new measures to evaluate teachers. Dozens of residents and teachers have painted anti-government slogans on overpasses and are suspicious of anyone trying to get by, putting many journalists covering the situation in danger.

Protestors have demanded the national network TV Azteca give them 15 minutes on primetime news to tell their story. A teacher and union member said the news “had not been telling the truth.” When asked about the protests at a joint news conference on Parliament Hill during his visit, President Nieto called the teachers “dissident” and asked them to do their “social role” to work harder for the betterment of their communities. Prime Minister Trudeau interjected, suggesting the teachers needed to “engage in constructive dialogue” and uphold the rule of law.

No doubt, human rights questions have been plaguing Nieto’s visit, and the Canadian government has been criticized for its reluctance to raise more awareness. But Canada depends on Mexico’s presence to counterbalance that of the US. And, unlike its Southern neighbour, Canada has little financial capacity to contribute to human rights endeavours within Mexico.

Amnesty International has pressed Trudeau to raise human rights concerns with President Nieto These include “state-backed sexual violence against women” and the disappearance of approximately 27,000 Mexicans within the past ten years, since Mexico’s launch of a war on drug cartels. In 2014, Mexican police and gunmen opened fire on a busload of students in Ayotzinapa, with six students killed and dozens still missing to this day.

Even more, torture in Mexico is out of control. The use of torture has increased six-fold over the past decade, especially with the deployment of the army and marines in the War on Drugs. According to Amnesty International, police and soldiers rape, suffocate, and electrocute men and women to get “confessions.”

But, despite these reports, Mexico remains on Canada’s list of “safe countries,” as designated by Bill C-31. This list is meant to deter abuse of the asylum system by guiding the government as to which countries “do not normally produce refugees, but do respect human rights and offer state protection.” Yet Mexico ranked first in 2014 for refugees who had been granted asylum and received their landed immigrant status.

Amid concern over human rights violations in Mexico, the “safe country” designation seems inappropriate. What explains this oversight, and the broader silence of the Canadian government on Mexico’s human rights record?

A key reason is that Mexico is Canada’s NAFTA partner. The two countries’ close ties through trade, investment, and security make criticism too risky. Indeed, former PM Stephen Harper cancelled the 2015 Three Amigos summit amid “growing tensions” with the US, but not over Mexico’s poor human rights record.

With the 20th anniversary of NAFTA’s signing in 2016, Mexico and Canada renewed a joint action plan that emphasized the two country’s economic ties through trade and travel while making promises to regulate migration, promote tourism, and advocate bilateral interests. This trade relationship will deepen and extend to Asia through the recently signed Trans-Pacific Partnership Agreement (TPP).

The relationship with Mexico is strategic. With Mexico’s heavy presence in the US in the form of embassies and representation, Mexico can be an ally for Canada’s political positioning. For example, the US’ imposition of COOL, otherwise known as “country of origin labelling” placed a burden on the Canadian economy through the restriction of cattle trade. Both Canada and Mexico took firm stances against this, deeming it “protectionist.” The two countries actively spoke out against this, and the US Congress repealed COOL in 2015 after the WTO imposed $1 billion in retaliatory tariffs against the US if the rule were not unturned.

Moreover, Canada lacks the capacity to actually aid Mexico in a tangible way. On the security front, Canada lacks the appropriate resources or money to deal with Mexico’s human rights situation. Through USAID, Mexico receives over $2 million in aid, along with military assistance. Canada had a foreign aid budget just under $6 billion in 2015, while the US had a budget of $23 billion just two years prior. Given that Canada is unable to provide those resources to Mexico, it could stand accused of hypocrisy if too vocal about Mexico’s human rights record.

The only steps Canada can take in the near future is to receive Mexican refugees and journalists who are fleeing, which starts with Canada taking Mexico off its list of ‘safe countries” for refuge.