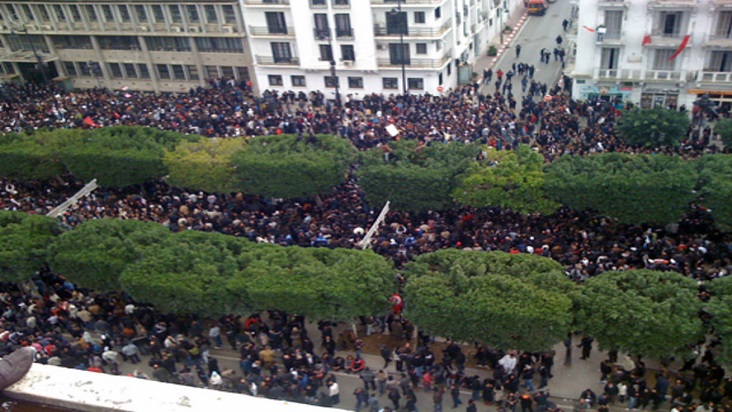 On February 11, 2011 the Arab world experienced a seismic political event, the resignation of Hosni Mubarak. This event could be compared to the fall of Prince Metternich on March 13, 1848. Both were largely symbolic events of a larger revolutionary wave sweeping across their respective regions. As the international experts and leaders market the 5th anniversary of the Arab Spring many are still searching for a paradigm to understand and analyze this revolutionary event. However, history offers us this opportunity.

The celebrated historian Eric Hobsbawm was one of the first to acknowledge the similarities between 1848 and 2011. In an interview with the BBC Hobsbawm says that “it [Arab Spring] reminds me of 1848—another self-propelled revolution which started in one country then spread all over the continent in a short time.” He also argued that it may seem the Arab Spring has failed, but in the long run they may have not failed at all, just as it was in Europe during1848. There are many similarities between the revolutions of 1848 in Europe and the Arab Spring. These similarities allow us to develop a revolutionary paradigm for failed revolts.

To understand where the Arab world is headed, one has to examine the events, which set it on its current course. An outside observer is able to view three distinct variables in both revolutionary events. There is the presence of social classes, contradictory goals and instruments in both 1848 and 2011. These variables are common to both revolutionary periods and form the basis of the revolutionary paradigm.

One must examine the different social classes involved in a revolt, because their interaction with one another will determine the strength of the revolutionary coalition. During the Arab Spring there were various groups, in various states, competing for legitimacy and power. The most prevalent social class, at least in the Western media, was the network-savy, college-educated member of the middle class. However, the educated elite were a minority within most Arab societies.

An Arab Human Development Report revealed that the Arab world had a lower literacy rate than other developing countries’ as a whole. This would partly explain why the revolution was largely limited to urban centres. The divide between rural and urban social classes is also important in understanding the Arab Spring.

Alex Warren and Lin Noueihed, in their book The Battle of the Arab Spring, discuss how the bulk of Egyptians were less concerned with events on Tahrir Square and more concerned about feeding their families. The intellectuals’ inability to comprehend and relate to the average citizen within their society meant their revolts would not last long.

Warren and Noueihed also highlight the central goals of many of the revolutionaries. Protestors, on average, wanted a stronger rule of law, greater economic equality and meaningful elections. The problem some of these rebels faced was that their goals conflicted with the Islamists goals. As the Arab Spring progressed the Islamist goals began to resonate more with the local and rural populations, because socialist or national values had been eroded by past corruption. The Islamic groups appeared to be the only viable alternative to their old authoritarian leaders.

The instruments used in a revolution are what physically mobilize or demobilize different sections of society. Leading up to the uprisings across the Middle East in 2011 informal political discussion groups began to emerge. These salons, as they were called, became places were intellectuals would meet in living rooms to discuss constitutional and electoral reform in their respective countries.

The counter-revolutionaries, or authoritarian leaders, in some states also used different instruments to suppress the uprisings. Many of the Gulf Kingdoms could simply export their discontent aboard, because most of their low-paid jobs were done by migrant workers. They would be forced to return to their countries of origin, but they would continue to mobilize back home. This was similar to the effects of the Wanderjahre, a year a journeymen would travel to improve his skills, during the 1848 revolutions in Europe.

There are many lessons from this historical analysis of the Arab Spring. One is that unless the underlining grievances are addressed there is a potential the state institutions will collapse once again into chaos. For example corruption within the Tunisian police force has gotten worse since the uprisings in 2011. There has been little concrete movement on this file within the Tunisian government.

Second the continued crackdown on dissidents in Egypt and other Middle Eastern States. Giulio Regeni, an Italian citizen, was found battered and dead on the outskirts of Cario recently. He was in Egypt studying the different labour unions in the country. The Egyptian administration adamantly denies being involved in Regeni’s death. The Counter-Revolutionaries of 2011 are still able to maintain some semblance of power in most of the regions states.

Third the continued unrest across the region as a whole could be linked to the fact that Arab Spring occurred within a multi-polar world. To understand this point more one has to compare the situation with Europe during the 19th Century.

The revolutions of 1848 occurred in an international system that was well established. The Concert of Europe emerged after the Napoleonic Wars in Europe and where the great conservative powers of Europe constantly intervened and imposed their collective will on states. During the 1848 revolutions the conservative Tsar of Russia came to the aid of his Austrian allies and suppressed the Magyar rebellion in Hungary. This effectively ended the 1848 revolutions and re-established the old international system based upon the Concert of Europe.

A Hungarian intervention did not occur during the Arab Spring. There was no large international intervention, other than a short bombing mission in Libya. For the most part the counter-revolutionaries were domestic. The result has been some states in the Middle East are now stuck between revolution and authoritarian order. The most glaring example is Syria.

The difference between today and 1848 is that no international order exists to re-establish order within the region. If the international community does not drastically change its approach to the crisis in Syria and other parts of the Middle East it is unlikely the situation will improve in another five years.  The seeds of democracy, in the form of salons and other civil society groups still exist, but action must be taken to nurture them.