After recognizing Crimea’s independence yesterday, Russian President Vladimir Putin has signed a treaty which annexes Crimea and the city of Sevastopol to Russia. Crimea was represented by Prime Minister Sergey Aksenov and Sevastopol by Mayor Aleksey Chaly. Putin explained annexation as action taken to correct a Soviet-era injustice; which refers to Soviet leader Nikita Khruschev who gave Crimea to Ukraine in 1954. Putin gave a passionate speech saying that Crimea has always been an integral part of Russia at heart, and that the annexation was necessary to prevent Western encroachment on vital Russian interests. The treaty still needs to be ratified in both countries’ constitutional courts, but given popular support for annexation in both countries, this is basically a fait-acompli.

exchange for Ukraine’s giving up its nuclear weapons after the collapse of the Soviet Union. NATO has expressed continued support for the preservation of Ukraine’s territorial integrity. As a consequence, the United States and NATO’s credibility is on the line, if they fail to act. But given the events of today, it looks like NATO may be too late. The first question that needs to be asked is if there is anything that can be done to restore Ukraine’s territorial integrity, the second is if there is a necessity to act and ultimately, NATO will need to consider whether it’s hard-line stance was truly necessary in this situation.

The response so far has been more sanctions from the United States, the EU and Canada. Sanctions have proven ineffective thus far and have only emboldened the resolve of Russia to re-incorporate Crimea and the city of Sevastopol. Given the ineffectiveness of sanctions, NATO will need to consider alternatives but responding militarily does not appear to be an option. A military response could lead Russia to stop exporting gas to Europe and given Russia’s nuclear stockpile, could prove to be devastating to Europe or even North America. NATO could support Ukraine by supplying arms to the Ukrainian military to fight Russia for the restoration of Crimea, in a Cold War style proxy war, but such action still risks the disruption of gas to Europe, which would be intolerable to many NATO members. In conclusion, NATO has very limited room to maneuver. And every NATO member knew this from the outset.

By comparison, President Barak Obama did not need to declare that the use of chemical weapons in Syria was a red line for the United States, nearly forcing the United States into a military confrontation. Chemical weapons are already a clear violation of international law; similarly, NATO did not need to take the position that any alteration to Ukraine’s territorial integrity is impermissible. The borders established in 1945 were meant to be permanent, but there have been numerous examples of border changes since then, each with their own special circumstances and justifications. It is simply incorrect to assume illegality when customary international law has made so many permissions for example:

What makes the case of Crimea unique is that it is the first case of a territory of one country being incorporated into another without the consent of the former. Here is the major difference between the case of Kosovo and Crimea to which the Russian government likes to make comparisons. Kosovo was granted independence from Serbia under the condition that it would not seek to join Albania and that condition is enshrined in Kosovo’s constitution.

Furthermore, NATO did not need to oppose the legitimacy of Crimea’s referendum, with all of its flaws, including the limited options listed in the referendum and the failure to include international election monitors to ensure that the presence of Russian 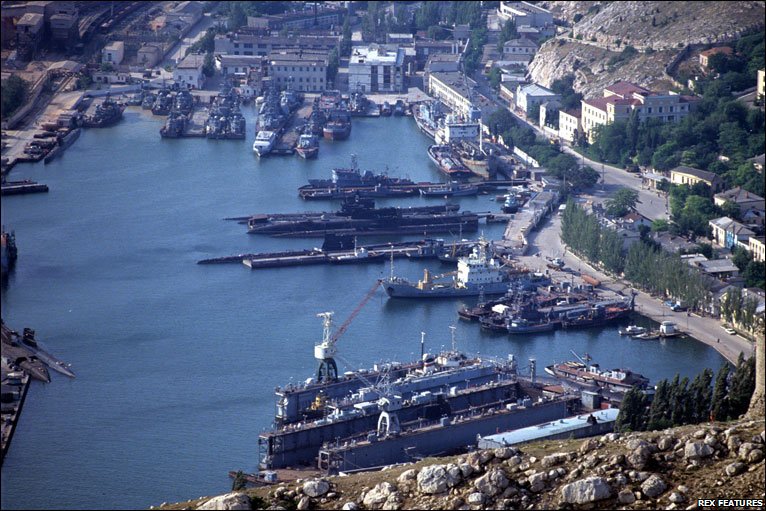 troops, which are not new, did not intimidate voters. The Russian Black Sea fleet has been stationed in Sevastopol since 1783, Russia and Ukraine signed a Partition Treaty in 1997 which allowed the Russian Black Sea fleet to remain, a deal which was extended until 2024 and stipulates that the Russian Navy is allowed up to 25 000 personnel on Crimean territory. Russia did not invade Crimea, but their troops increased level of readiness could be viewed as intimidating. Yet the criticism that Crimea’s referendum violates international law and Ukrainian law because Crimea did not receive permission from the Ukrainian government to hold the referendum holds no weight; Quebec did not seek the federal government of Canada’s permission to hold its referendum. Neither did Veneto seek the permission of Italy to hold its secession referendum this Sunday.

The application of international law by both NATO and Russia has been selective throughout this dispute. The ousting of President Victor Yanukovych was illegal, as he was democratically elected and a democratic process of impeachment existed for his legal and democratic removal, yet it was not used. In any case, his removal undeniably represents the will of the Ukrainian people and there is an instinctive justice in that. Similarly, the referendum in Crimea which resulted in a 97% vote in favor of joining the Russian Federation is curious, but in light of the Tatar community’s decision not to vote and the demographics of the region, it is still a plausible result. The world knows that the incorporation of Crimea into Russia is supported by the majority of the people of Crimea and Sevastopol by an even larger margin than the supporters of Yanukovych’s removal from power, even if the majority is less than 97%.

It may be wise to consider this dispute complete and leave the borders as they now are. NATO can either signal to Ukraine that they need to move their attention toward national reconciliation and economic recovery or it can fuel Ukrainian irredentism. Maybe like Kosovo, Crimea can also be a special case, but one which due to different circumstances necessitated a different result. NATO could use this opportunity to seek concessions from Russia in other areas of dispute in order to mend the relationship that had made so much improvement prior to Euromaidan. NATO could seek assurances from Russia that their expansion will stop at Crimea; that they will refrain from pushing further into Ukraine in exchange, recognize the annexation of Crimea.

Without Crimea, Ukraine’s pro-European government will benefit from being in a larger majority which will help long-term stability. Ukraine has been divided by a population which has different historical memories as part of either the Austro-Hungarian Empire or the Russian Empire and until now was divided over the future direction of their country. The loss of pro-Russian Crimea will consign the pro-Russian movement in Ukraine to a minority for years to come and provide some much needed stability to the country and the new government.

Justine Reisler
Justine Reisler holds an Honors Bachelor of Arts Degree from the University of Toronto. She completed a Double Major in International Relations and Political Science with a Minor in European Union Studies. She has worked as a Media Analyst for the Canadian Centre for the Responsibility to Protect and has traveled to Kosovo for an investigative research report on Kosovo’s progress toward independent border management. Her current research interests include security and political developments in Russia, Southeastern Europe, the Caucuses and the Middle East.

Reporting From Tamarev: A Fable

This piece is a satire fable written by Seoren A’Garous, attempting to reflect the dynamics behind a variety of real world issues – specifically those of the Israeli-Palestinian conflict.