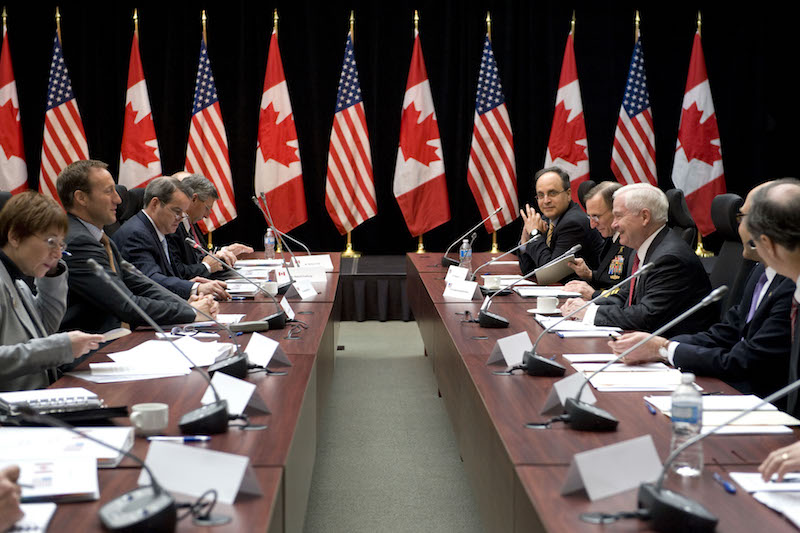 The second round of NAFTA talks concluded Sunday September 5th, 2017, culminating in an impressive summer of new challenges facing North American security and prosperity. With Canada’s steadfast commitment to the North Atlantic Alliance confirmed in June, and increases in defence spending underway, the country is strategically positioned to face an array of new challenges such as security and immigration, trade, and global peace.

Maintaining a competitive advantage in defence capabilities is crucial in deterring aggressors and ultimately mitigating war, and is a keystone of NATO’s commitment to collective defence. “It was determined that an alliance between Europe and North America sends a message of solidarity that would deter aggression and help avoid a third world war,” affirms Kay Bailey Hutchison, the US Ambassador to NATO, who notes Western stability of the past 60 years is not to be taken for granted after decades of war that plagued much of continental Europe and America. North America’s competitive military advantage implies a technological edge, which both the US and Canadian governments have recognized as imperative in extending deterrence and maintaining global peace. The Canadian government has recognized the importance of technology in remaining competitive in the dynamic global landscape, and is investing in new opportunities that spur technological innovation, as well as in ensuring there are frameworks in place to support them.

While the government supports an agenda that sees the reunification of families and less red tape for business professionals, the projected increase of immigration to Canada presents new challenges in ensuring due process is met at the border. In investing in technology, the government is opening the doors for the possibility of greater security and faster processing in this area. Engaging youth in technology, investing in tech clusters, calling on the private sector for input, and welcoming skilled workers are a few of the ways the government is working to build the frameworks for institutionalizing technology.

Ahead of the NAFTA negotiations that will continue to unfold into the autumn, the Canadian government has reached out to stakeholders across the country in hedging against the uncertainty of trade provisions that challenge North American competitiveness. As the US continues to dominate global defence markets and competes in major Crown procurement projects, how will Buy American rules interact with Canadian offset policy? Published in the Federal Register on August 21, 2017, the Department of Commerce issued a call for departments to examine how US trade deals affect Buy American Laws, possibly removing these provisions from the negotiating table. The current offset policy requires that 100 percent of the value of government defence contracts awarded to foreign bidders are reinvested into the Canadian economy, such as through the creation of value-added jobs, technology transfers, or educational investments that help Canada’s Research and Development (R&D) capabilities.  Possible changes to NAFTA include the removal of Chapter 19, which provides a protecting mechanism for Canadian and Mexican firms to arbitrate, and more restrictive Rules of Origin, where more parts in supply chains are to be produced in the US. In light of this, smaller Canadian defence firms may look to pivot rather than disappear should conditions seem untenable. The threat of losing niche supply chains would hinder North American defence and competitiveness, as rebuilding integrative networks in times of war is clearly both expensive and inefficient.

In this way, there is an opportunity to develop greater R&D capabilities in Canada. R&D projects engage industries in both the private and public sectors across the country, and have the potential of churning technology and developments that contribute to the public good.

One part of a solution can be found in private sector R&D that utilizes government funding. Instead of investing the majority of the pie in huge procurement projects that are subject to politicization, delays, and changes to government, engaging the private sector would spur innovation through the creation of jobs, and provide input to the legal frameworks and policies that can give incentive to innovate.

Improving capabilities and competitiveness is necessary to adapt in this constantly changing world. Canada has responded to these changes through innovation and a desire to share these advantages with other North American countries. As Trudeau affirmed at the NATO talks earlier this year, unity and responsibility remain a benchmark of North American security. Remaining competitive and responding to global challenges requires integration with our North American allies. We are simply stronger together.