In September 2009, two German ships sailing from Asia to Europe via Russian Arctic waters made news for being the first Western vessels to successfully navigate the famed North East Passage. From Japan to Scandinavia, the route entails sailing north through the Bering Strait, which separates the easternmost point of Asia, in Russia, and the westernmost point of North America, in Alaska. In previous years the North East Passage was impassable as waters remained locked in ice; more recently, warmer temperatures resulting from human-caused global warming have loosed and cracked the ‘fast’ or continuously frozen sheets of ice that covered the route.

Four years later, global warming is accelerating at an alarming rate. In 2011, a record 33 ships navigated the North East Passage, also known as the Northern Sea Route, during the 141 days from early July to mid-November that it was navigable. Year by year the Arctic Ocean remains ice-free longer, extending the time period for shipping. 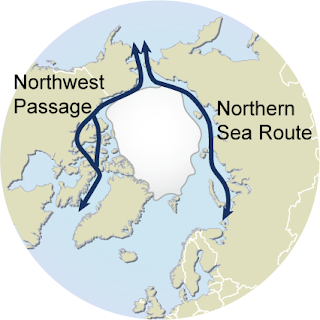 The Northern Sea Route is attractive compared to alternative routes that involve passing through the Suez or Panama Canals because of its comparatively short length; while a trip from Tokyo to London via either the Suez or Panama canals would, in both cases, entail travelling over 20,000 kilometres, using the Northern Sea Route takes around 15,000 kms. The North West Passage shaves roughly the same length off the journey.

Growth in Arctic shipping and energy extraction will develop hand in hand as the Arctic assumes a more prominent place in the global economy of the 21st century. The thinning of sea ice and, in some areas, its disappearance altogether during the summer months, makes available potentially extremely lucrative mineral and energy resources. Not only will countries and multinational corporations vie for profit in the Arctic, but the development of industry for energy extraction will jeopardize the continued financial success of oil production in other regions, including Nigeria, Venezuela, and the United States.

Production is set to be underway in some areas of the Arctic soon. Russia’s second-largest natural gas producer, Novatek, in partnership with French subsidiary company Total, recently secured the rights to the East-Tazovskoye gas field in the Russian Arctic. Novatek announced plans to build a $20 billion liquefied natural gas plant, from which gas will be sent to Asia via the North East Passage.

A new, potentially significant source of energy has also emerged in the Arctic. Methane hydrate, a crystalline form of natural gas found locked within permafrost and at the bottom of the Arctic Ocean can be tapped and extracted, and used as a source of energy. In spring 2013, a state-owned Japanese oil company appears to have extracted methane hydrate and transformed it into methane gas via depressurization. The extraction of methane hydrate and gas from the Arctic and its waters is sure to add to growing international traffic in the region.

The extraction of methane hydrate for energy could also allay the threat of methane gas being released into the atmosphere as ice and permafrost in the Arctic melt. Articles from the Guardian UK, BBC News, Huffington Post, CBC and other major media sources say the release of methane gas is an “economic time bomb” that could cost upwards of $60 trillion in the next ten years.

The development of shipping and energy extraction will require the implementation of enforceable regulations and monitoring, as well as the establishment of the requisite infrastructure associated with security and defense, mapping, and energy exploration in the North. Many Canadians and Aboriginal groups have expressed fears about the ability of ‘big oil’ to handle extreme Arctic weather or an oil spill in the region; however, residents of the Canadian North may benefit from such infrastructure development.

According to a recent article by Iqaluit-based publication Nunatsiaq Online, Nunavut suffers from “a lack of basic marine infrastructure that prevents the territory from meeting basic needs and developing its economy.” The development of infrastructure to service commercial shipping, energy extraction, and expanded government activities in the North, notably concerning sovereignty and security, will be crucial to the development of Northern Canada’s domestic economy.

Canada Catching up in Southeast Asia

Albania and NATO: A Promising Start

In light of Albania’s recent inaugural maritime operations as a NATO member, Emily Simonin briefly reviews the success of the operation and the progress of Albania.