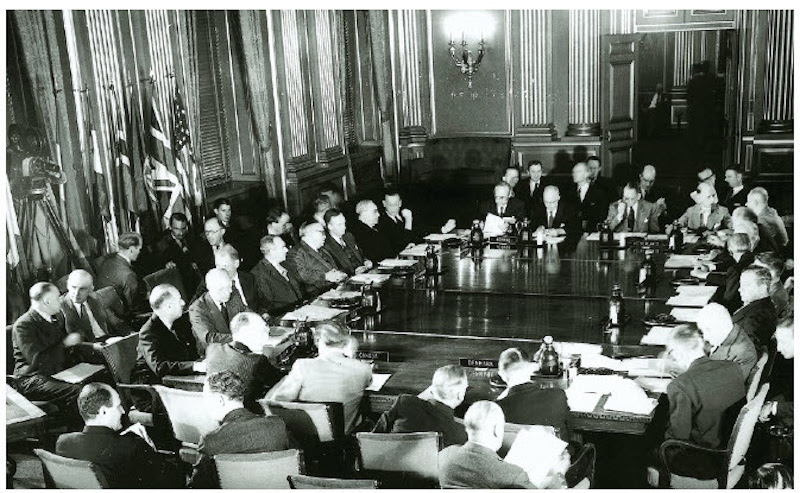 Canada’s international identity has often been associated with peacekeeping and playing an active role in a number of multilateral forums. Canada’s commitment to global peace and security is demonstrated through the support of international organizations and summits. The numerous partnerships and cooperative mechanisms in place have forged Canada’s national identity in leaders and advocates in advancing global priorities in areas such as the environment, security, justice, and trade. The government of Canada plays an active role in safeguarding and strengthening the international order by promoting global peace operations, advancing inclusive and progressive international trade arrangements, reducing poverty, advancing gender equality, combatting climate change. In this article, Canada’s participation and commitment to global prosperity will be examined by observing the numerous multilateral and international organizations it’s involved with. Canada has been a founding member of several international organizations such as the International Criminal Court (ICC), North Atlantic Treaty Organization (NATO), the Organisation for Economic Co-operation and Development (OECD) and the Organization for Security and Co-operation in Europe (OSCE). Canada continues to play a strong role in these respective institutions by funding, committing troops, staff, and sharing best practices.

Canada and the International Criminal Court (ICC)
Governed by the international treaty known as the Rome Statute, the International Criminal Court (ICC) is the world’s first permanent international court. The ICC has the jurisdiction to prosecute individuals charged with war crimes, genocide, and crimes against humanity. Canada played an important role in the establishment of the International Criminal Court and played a central role at the Rome Conference. During the conference, the Canadian delegation and senior Canadian diplomat Philippe Kirsch were tasked with drafting a final proposal for the creation and establishment of the ICC. Faced with hundreds of technicalities such as clarifying the scope of the court, the definitions of crimes, and logistics such as procedures and principles – the final proposal prepared under Canadian leadership was adopted by 120 States. Moreover, Canada also contributed to the development and inception of the Court in other ways, namely, “chairing a coalition of States called The Like-Minded Group”. The goal of this group was to encourage the international community to adopt the Rome Statute. The Rome Statute, officially adopted on July 17th 1998 is the founding treaty of the ICC and provides the Court the jurisdiction to prosecute crimes against humanity, genocide, and war crimes.

Likewise, Canada became the first country to incorporate the obligations of the Rome Statute into its national laws when it implemented the Crimes Against Humanity and War Crimes Act (CAHWCA) on June 24, 2000. Canada also contributed to a United Nations Trust Fund which allowed developing countries an opportunity to take a seat at the negotiation tables. This Trust Fund ensures that the ICC has full international representation. In addition, in February 2003, Canadian diplomat Philippe Kirsch was elected as a Judge for the ICC and was then elected as President of the Court. In 2006 he was re-elected. Canada’s involvement in the ICC speaks to its overall support for international law and stability within the global community.

The North Atlantic Treaty Organization (NATO) was established on April 4th, 1949 in Washington. The signing of the North Atlantic Treaty created a political-military alliance which preserves North American and European security. Canada was a founding member of the Alliance and continues to demonstrate its commitment by taking part in every NATO operation since the foundation of the Alliance. The Canadian Armed Forces are one of NATO’s most efficient and responsive forces and have shown resolve in the face of growing Russian aggression and terrorism in Middle East. Canadian Forces are currently partaking in Operation IMPACT to support to the Global Coalition to dismantle and defeat the Islamic State in Iraq and Syria. Canada’s detailed participation in Operation IMPACT can be found on the NATO Association of Canada website.

Additionally, Canadian Forces are participating in anti-deterrence activities in Latvia. The Canadian-led NATO effort in Latvia was established as a response to Russia’s annexation of Crimea in 2014 and the invasion of eastern Ukraine. The mission was recently extended by Prime Minister Trudeau which is expected to run until March 2023 with the participation of 540 Canadian troops. Canada’s participation in these deterrence efforts aim to reinforce NATO’s collective defence and Operation Reassurance has Canadian Armed Forces serving in Central and Eastern Europe.

The Organisation for Economic Co-operation and Development (OECD)

Canada is one of the founding members of the Organisation for Economic Co-operation and Development (OECD). In 1961, 20 countries, including Canada signed the convention to create the OECD to support governments in attaining economic growth and social well-being. Currently, the OECD “comprises 36 member countries, which collectively account for 62.2% of the world economy, 61.2% of world merchandise imports and 17.5% of the world’s population.” The OECD’S organizational mandate is founded on promoting economic stability and tackles themes such as trade, tax, development, technology and public governance. The OECD also acts as a forum where discussions and topics such as the standard of living and employment security are debated and analysed. For example in the area of taxation, the OECD pursues soft law, a non-binding quasi-legal instrument used in international law, to put forward common international standards.

Currently, Canada ranks 7th in contributions to the organization and is very active at the committee level, chairing 25 different working groups.

The Organization for Security and Co-operation in Europe (OSCE)

The Organization for Security and Co-operation in Europe (OSCE) is the world’s most expansive regional security organization. The multilateral forum has 57 participating states and 11 partners collaborating on the OSCE’S mandate of conflict prevention, crisis management and post-conflict rehabilitation. Canada’s participation in the OSCE is traced back to the foundation of its precursor, the Conference on Security and Co-operation in Europe (CSCE) established in 1973. The CSCE was initially established to encourage dialogue between the East and the West during the Cold War détente period. In December 1994, the CSCE changed its name to the OSCE by a decision of the Budapest Summit of Heads of State or Government.

Canada must continue to champion in the area of diplomacy and continue to play a prominent role in multilateral bodies. Increasing leadership roles and strengthening foreign policy priorities such as trade, climate action, and women’s rights could be the future steps in cementing Canada’s role in the international arena. During a speech in Ottawa, Canadian Foreign Minister Chrystia Freeland called for taking steps to support multilateralism and stated that “long standing pacts have formed the bedrock of security and prosperity”. Freeland also highlighted the importance of gender when considering foreign policy. Likewise, Canada and Chile announced that they had restructured their existing trade deal, the Canada-Chile Free Trade Agreement (CCFTA), to include a new chapter on gender and trade. The new Trade and Gender chapter is the first of its kind for any G7/G20 country. In 2017, Canada also launched ‘Canada’s new Feminist International Assistance Policy’. The new approach aims to empower women in six areas, “Gender equality and the empowerment of women and girls, human dignity, growth that works for everyone, environment and climate action, inclusive governance, and peace and security”. The new policy positions Canada as a leader on global gender equality and in support of the policy Canada will allocate $150 million from 2017 to 2022. At the security and defense level, Canada has also contributed greatly to female participation and gender equality in the armed forces. In 2018, a small group of female Canadian Armed Forces members were dispatched to Jordan to provide training to the Female Jordanian Armed Forces Quick Reaction Force Female Engagement Team. Canada can continue to provide a leading example by considering and including gender perspectives in trade agreements and in multilateral organizations.