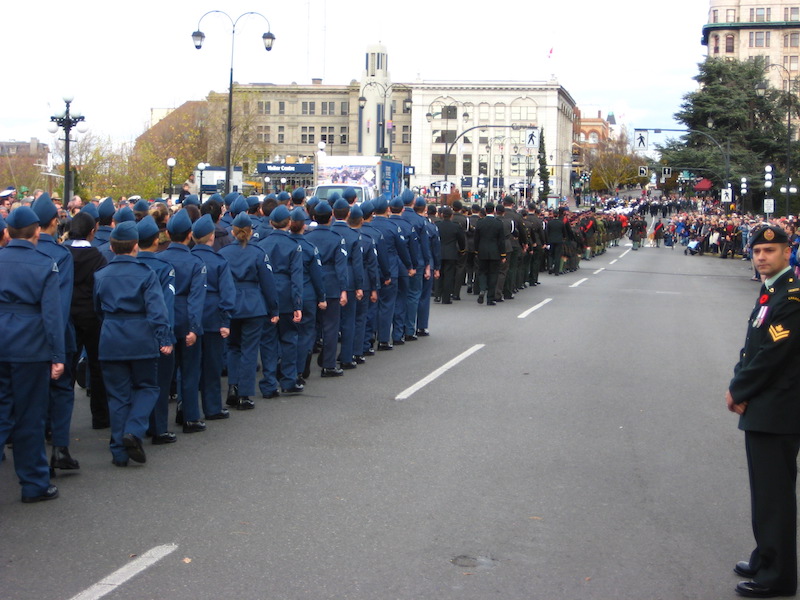 The Cadet program is one of the largest federally sponsored youth programs in Canada, with approximately 53,000 cadets across three branches similar to the Canadian Armed Forces (CAF): (a) Royal Canadian Air Cadets, (b) Royal Canadian Army Cadets, and (c) Royal Canadian Sea Cadets. It is a national program available for youth between the ages of 12 to 18 providing endless education and life-changing opportunities at no cost. Furthermore, Navy League Cadets is an additional branch of Sea Cadets that allows youth between the ages of 9 and 12 to join, in preparation for the Cadet Program. Although it is not mandatory for cadets to transition into the military, for many, the program acts as an early preparation guide for their military career. Besides physical training, discipline, citizenship, and leadership, cadets also learn marksmanship, sailing, orienteering, survival, flying, and parachuting skills.

Canadian Army Cadet history of initial drill associations pre-dates Confederation. With the turn of the 20th century, Army cadets established their first corps and later had 40,000 former cadets serve in His Majesty’s forces during the First World War, as well as 230,000 former cadets in the Second World War. In 1941, Canada also established Air Cadets for the purpose of training young pilots during WWII. The primary focus of the Cadet program has shifted to promote civic duties with the same type of training. Air Cadets, for instance, have competitive pilot scholarships available that provide both training and pilot licenses free of charge. In fact, as a result of this program, one out of every five Private Pilots in Canada and 67% of current Commercial Airline Pilots are former Air Cadets.

Due to its effectiveness, NATO members such as France, US, Germany, Belgium, Turkey and others have incorporated cadet training as part of their civilian and military society. Although Great Britain’s successful air cadet program is the iron foundation of its RAF and aerospace industry, the Ministry of Defence decided to uphold budget cuts that will eliminate almost half of the training facilities and equipment currently available, affecting more than 40,000 air cadets. Sir Gerald Howarth, a former defence minister and pilot, vigorously disputed the budget cuts stating, “We have the best pilots in the world, but it’s the ability to fly that sets them apart. The RAF needs to be able to continue to draw on the widest possible pool.”

Likewise, the Canadian Cadet program has faced multiple financial troubles, operating on a slim budget. Under the National Defence Act, the program is funded through the Department of National Defence (DND). Although the Canadian program is half the size of Britain’s, the funding provided by the DND is not nearly enough to sustain the program. Additional support is provided by civilian Cadet leagues in each branch to help feed, clothe, and pay for training exercises. In December 2013, military budget cuts put a freeze on the purchase of winter parkas. During the cold winter months, cadets had a shortage of proper uniform items to keep them warm during their parades and training. It is still evident that the Cadet program is heavily underfunded and lacks general support from DND.

The quality of the Canadian Cadet program is truly exemplified by its alumni, such as  Chris Hadfield, who received his glider and private pilot licences as an Air Cadet and later went on to become a fighter pilot for the RCAF, the first Canadian astronaut to walk in space and commander of the International Space Station. As well as Marc Garneau, current Minister of Transport, who later became a military officer in the CAF, an astronaut and the President of the Canadian Space Agency. Former Air Cadet, Lt. Col Maryse Carmichael became the first female pilot to lead the Snowbirds and currently resides as the Deputy Wing Operations Officer at 3 Wing Bagotville. Likewise, Commodore Luc Cassavi, a former Sea Cadet, shared his experience internationally, most notably in Australia, before becoming a Director of the Canadian Submarine Force, and later the Director General Naval Strategic Readiness. Another former Sea Cadet, Commodore Brian Santarpia, is now the current Chief of Staff to the Vice Chief of Defence Staff. Commodore Santarpia also had the honour of leading Combined Task Force 150, combating the al-Shabaab terrorist group near Somalia. Former Sea and Army Cadet, Simon Jacques, served 11 years in the CAF and is currently President of Airbus Defence and Space Canada Inc. Finally, retired General Walter Natynczyk, who served as Chief of Defence Staff and is currently the Deputy Minister of Veterans Affairs, is a former Air Cadet.

The program is a great tool for developing both citizenship and the quality of our national security. Observing the impressive list of Cadet alumni as well as the continuous benefits that the program brings to society and the military, DND should promote and properly finance the Cadet program. If Canadians truly care about how well trained our Forces are, the same Forces who protect our skies, waters and borders, then we should have early and fair training for all potential candidates.