To quote George Orwell: “International football is the continuation of war by other means.”

Last October, in the 41st minute of the UEFA European Championship qualifying match between Serbia and Albania, this quotation came to life on the soccer pitch. A remote-controlled drone carrying the irredentist flag of Greater Albania flew into the stadium. When a Serbian player attempted to remove the flag, he was mobbed by Albanian players, who were subsequently assaulted by violent Serbian fans. The match was abandoned amid riotous conditions and in the following hours reports of ethnically-motivated attacks in Albania, Serbia, Montenegro, and Austria surfaced. It was later reported that the pilot of the drone was Olsi Rama, the brother of the Albanian Prime Minister.

Many believe that the appeal of international sporting competitions lies with the masking of political, historical, and racial friction. A setting like the World Cup is perceived to be the ideal venue for fans and players alike to shelve their animosities and simply revel in the elegance of the “beautiful game.” However, for me, the opposite is true.

Abuse is ruthless and rampant, both on and off the pitch. Players and fans alike are subject to mistreatment over their race, sexual orientation, country of origin, and social class. Hooliganism is abundant, corruption levels are astounding, and unbridled nationalism is at the forefront of every match.

Franklin Foer has written a national bestseller entitled How Soccer Explains the World, in which he analyses soccer-related case studies in order to explain his theory of globalization. However, soccer does not only explain the world, but it can drastically affect it. It can be an impetus for political, economic, and social change. It can spur foreign and domestic policy goals. And it can prove a powerful bargaining chip.

The charges brought against these fourteen men include a cumulative 47 counts of money laundering, bribery, and fraud over a period of 24 years. Evidence suggests that the 2010 World Cup was awarded to host South Africa under fraudulent circumstances, and a further Swiss criminal investigation over the decision process for the 2018 and 2022 World Cups, to be held in Russia and Qatar respectively, is pending. 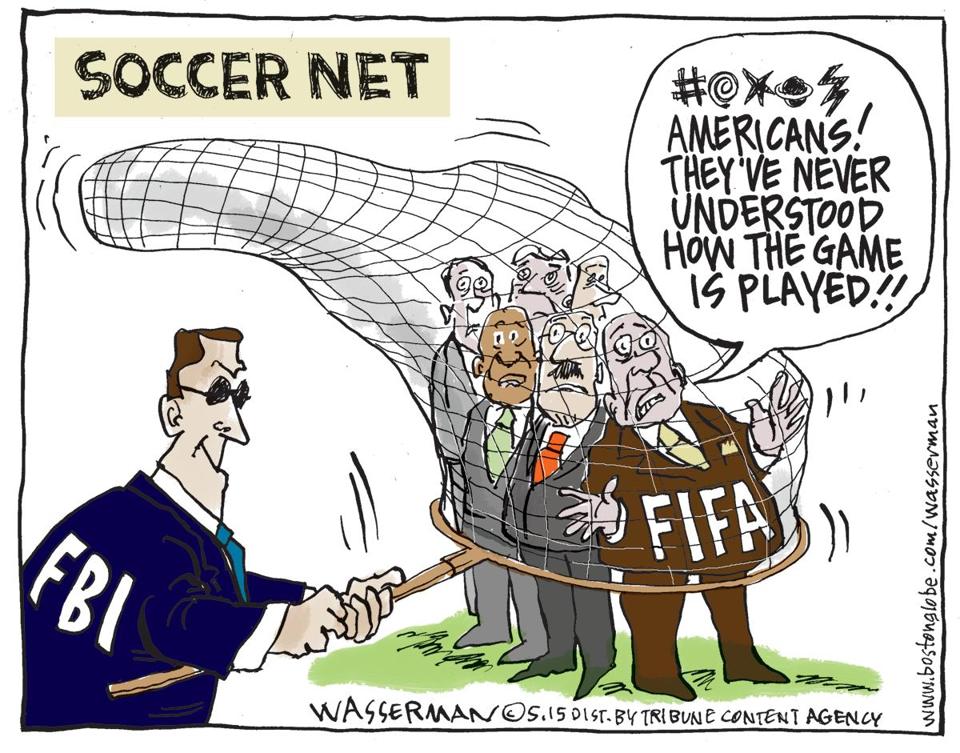 Amid speculation over the probable illegality of the 2018 and 2022 voting processes, it appears that the World Cup has taken the form of another proposed sanction against Russia. The primary issue of this avenue of confrontation centres around whether Russia should be stripped of its hosting rights in 2018, with many prominent western policymakers advocating for a revote or a boycott.

Although the debate gained significant traction last week as a result of the historic indictments of FIFA executives, it has in fact been raging since the conflict in Ukraine began, and has been accompanied by the incessant media posturing that we have come to expect from both sides.

In the aftermath of the Russian annexation of Crimea in March 2014, two American Republican senators, Dan Coats and Mark Kirk, called for FIFA President Sepp Blatter to remove Russia as the hosts of 2018 and to ban them from participating altogether. Their letter cited the Yugoslav precedent, in which Yugoslavia was banned from participating in the 1992 European Championship and 1994 World Cup as a result of its violent disintegration and aggressive foreign policy.

In July, when Malaysian Airlines Flight 17 was shot down over Hrabove, the calls for Russia to lose the World Cup intensified. Nick Clegg, then-Deputy UK Prime Minister, referred to the proposal as “a very potent political and symbolic sanction,” further remarking that allowing Russia to retain the tournament would make world leaders look “so weak and so insincere.”

Such declarations have since been echoed by US Senators Robert Menendez and John McCain, former Football Association (FA) chairman David Bernstein, UK Prime Minister David Cameron, and the favourite to win the UK Labour leadership, Andy Burnham, among many others.

It is both revealing and unsurprising that many of these officials who have called upon FIFA to strip Russia of the World Cup have also demanded the imposition of harsher sanctions upon Vladimir Putin’s authoritarian regime.

Russia has responded with retaliatory sanctions of its own, referring to the proposals as “yet another blatant attempt [by the United States] to extend its jurisdiction to other states.” Putin has also issued travel bans upon many of these politicians over the past year.

Vladimir Putin is well aware that the removal of the World Cup would have an extensive impact upon nearly every facet of Russian life. The immense loss of prestige alone would drastically lower his approval rating amongst Russian citizens, especially since the positive civilian infrastructure that is typically constructed by the host nation would not materialize.

Putin is also counting on the tourism and investment funding that could help revitalize the Russian economy, which has stagnated as a result of international sanctions.

Perhaps most significantly, it would certainly widen the ever-expanding gap between Russia and the western world, and would undeniably increase the vitriolic rhetoric between the two sides.

The reinterpretation of the World Cup as a political pawn has added a unique dimension to the 2018 competition. Even if you elect not to watch the World Cup, I would not neglect it entirely, as the back-and-forth political machinations might actually prove to be more interesting than the matches themselves.