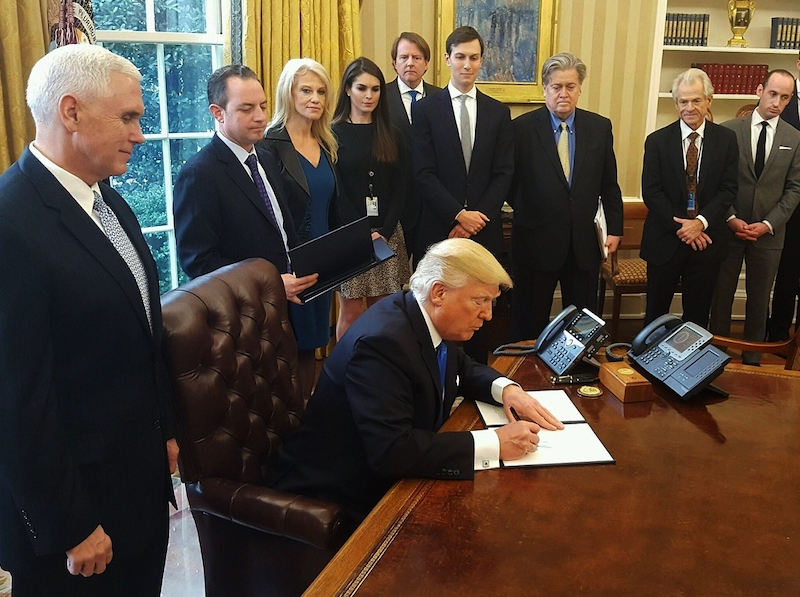 On January 20 2017, Donald Trump was inaugurated into the White House as the 45th President of the United States. His election campaign promised immigration reform, citing the need to build a wall (at Mexico’s expense), and temporarily ban some Muslims from entering the United States.

During his first week in the Oval Office, President Trump showed no signs of backing down from his promise. On January 27 2017, Trump issued an executive order barring citizens from seven countries from entering the United States for the next 90 days, and also suspended the admission of all refugees for 120 days. The seven countries identified by the travel ban include Syria, Sudan, Iran, Iraq, Libya, Yemen and Somalia, which are home to more than 280 million people combined. This has also temporarily halted the entry of Syrian refugees until the American government develops a more robust vetting system.

Trump made a unilateral decision to issue the ban using his authority as President, as outlined in the Constitution and the Immigration and Nationality Act. The Act provides the President with the authority to suspend entry by foreigners deemed detrimental to the country based on national security interests.

Since the President neglected to collaborate with the Department of Justice and Homeland Security, many travellers experienced mass confusion and chaos at airports across the United States because officials were not briefed on how to interpret the new law.

Initial reports from the US State Department suggested that green card holders with passports from any of the affected countries were told that they would be banned from entering the United States. However, that policy has since been changed and entry is being determined on a case-by-case basis.

For Canadians, similar reports indicate that the immigration ban applies to Canadians with dual-citizenship in any of the banned countries. The Prime Minister’s Office has refuted this claim and has assured that all Canadians and permanent resident holders are permitted to move freely across the US-border.

In light of these developments, many Americans and refugees are considering calling Canada home. As a result, the influx of Americans and other refugees may cause shifts in Canadian demographics, economy and society altogether. Canada can be seen as a prime destination to acquire top talent from Americans that are not happy with the President’s policies. Prime Minister Trudeau may have to figure out how to support increased demand on immigration and housing services for immigrants and refugee claimants.

On Twitter, Trudeau welcomed refugees who have been rejected from the US, “to those fleeing persecution, terror & war, Canadians will welcome you, regardless of your faith. Diversity is our strength #WelcomeToCanada. [sic]”

Recently, Manitoba has noticed a growing number of undocumented immigrants fleeing the US in treacherous conditions and seeking asylum in Canada. Stories of men, women and children have surfaced across the country. They tell of desperate immigrants who fear for their safety and lives following Trump’s immigration ban. Many had emigrated from their home countries and travelled through many countries, including Mexico, on their way to the United States. Today, they risk their own lives in deep cold and icy conditions to traverse the Canadian border.

Trudeau confirmed these asylum seekers are being welcomed with open arms and processed as refugees after they are interdicted by the Canada Border Services Agency. The Safe Third Country Agreement between Canada and the United States requires people seeking asylum to apply for refugee protection in the first safe country they arrive in, and the United States is one such country considered to be safe. Many advocates in Canada want this particular law scrapped, arguing that the US is no longer a safe country.

Paul Caulford, a doctor at the Canadian Centre for Refugee and Immigrant Healthcare agrees with this assessment. He recently stated: “There’s no question what’s driving them… Virtually every person who’s crossed, from pregnant women in the back of trucks to those shepherding their children to safety, have said to us that the United States is no longer a safe country for them to be in [sic].” The Canadian government is not willing to scrap the Safe Third Country Agreement nor is it sending asylum seekers back to the United States. Rather they continue to monitor the immigration ban closely and respond accordingly on a case-by-case basis.

The immigration ban has ignited public outcry from Muslim and Non-Muslim communities across the world and many critics see it as a blanket Muslim ban that targets individuals based solely on their religion. Human rights organizations, advocacy groups and the American Civil Liberties Union have condemned Trump’s policy because they believe that it is not in line with US values.

“Everybody is arguing whether or not it is a BAN. Call it what you want, it is about keeping bad people (with bad intentions) out of the country! [sic]” tweeted Trump.

The executive order has been challenged in the Courts due to potential constitutional and statutory violations of the US Constitution. Legal scholars contested Trump’s immigration ban using a combination of United States Constitutional Amendments and the 1965 Immigration & Nationality Act. The Fifth Amendments Due Process Clause is used to protect the civil liberties of travellers being detained without the presence of a grand jury. Furthermore, the Equal Protection Clause of the Fifth Amendment also prohibits the government from discriminating against any persons born or naturalized in the United States. Also, the First Amendment’s Establishment Clause forbids government action favouring any one religion. The Immigration and Nationality Act bans any form of discrimination based on race, nationality or place of birth.

Four United States Federal Court judges have successfully used these Constitutional challenges for a number of travellers being held without just cause at airports while holding a valid US-entry Visa. New York’s district Judge Ann Donnelly temporarily struck down the executive order for passengers stranded at John F. Kennedy airport. She writes, “the petitioners have a strong likelihood of success in establishing that the removal of the petitioner and other similarly situated violates their due process and equal protection guaranteed by the United States Constitution.” Judge Donnelly’s decision established a precedent that has been applied in other major international airports across the United States.

There’s no question terrorism continues to be a real threat in the Western world, as was exemplified in the recent Quebec City mosque shooting, the Paris attacks and the San Bernardino massacre. These are used to justify the need for vigorous vetting systems and security checks. However this must be done correctly to ensure that Constitutional rights are protected. Utilizing fear-mongering tactics at the expense of civil liberties is simply not the answer. Additionally, Canada, The United States and other western countries must remain vigilant and maintain security within their own borders because the immigration ban does little to protect homegrown terrorists.

Marielena Hincapie, executive director of The National Immigration Law Center, in the United States, advises the country that “we’re really in a crisis mode, a constitutional crisis mode in our country, and we’re going to need everyone…This is definitely one of those all-hands-on-deck moments.”

Photo: President Trump signs an executive order (2017), by the Office of the President of the United States via Source. Public Domain.