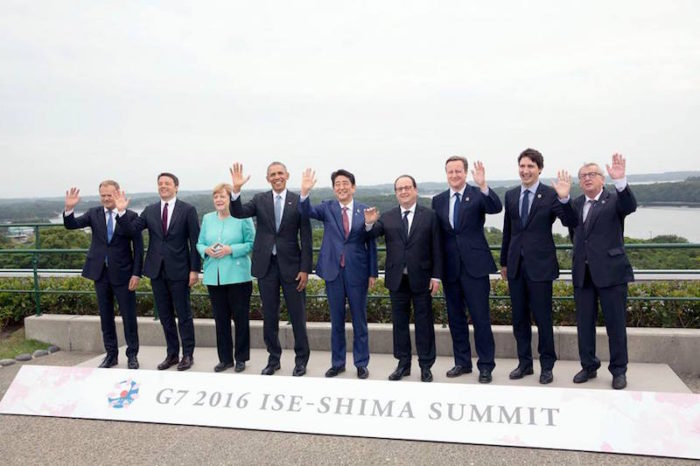 During his week in Japan, Justin Trudeau was able to combine his early meeting with Japanese leadership, including Shinzo Abe and automobile manufacturers with the G7 Summit that occurred on May 26-27. With six other leaders during the summit, including Angela Merkel, Barack Obama and David Cameron, Justin Trudeau still managed to remain in the headlines. Without hesitation, Trudeau recommended two major proposals to the G7 leadership: (a) investing in the economy to enhance growth, even with deficits, and (b) to withhold paying ransom for hostages.

Not all leaders supported Trudeau’s bold economic proposition. Peter Boehm, acting as the Personal Representative of the Prime Minister, noted that Canada appreciates each nation’s differences, and understands that each nation will have to implement its own strategies for an effective solution to avoid a financial crisis in the future. In response to skepticism, Trudeau replied, “We know trade-intensive industries pay 50 per cent higher wages, so we need to make a case for trade – it’s not just about nice political speeches”. After Trudeau’s push for increased trade and global investment, Abe and Obama displayed similar concern about the global economy, suggesting that some form of investment will be beneficial to steer away from another major financial collapse. Trudeau pushed for increased wages, focusing on employment, and addressing structural problems as a template for further economic growth. With Trudeau’s convincing arguments, the nations pledged to implement their own nation specific strategies to produce a balanced response to lift growth.

As another economic strategy, Trudeau attempted to move the Canada-European Comprehensive Economic and Trade Agreement (CETA) forward in separate bilateral meetings with German Chancellor, Angela Merkel, and French President, François Hollande. The CETA will attempt to remove barriers between Canada and Europe in its business relations, through the removal of: (a) customs duties, (b) illegal copying of EU innovations, and (c) limitations of access to public contracts. As a result, CETA will offer mutual benefit for both sides, bringing EU companies more business opportunities in Canada, making Canada business-friendly to other countries, and by supporting employment in Europe.

Besides economic discussions, Trudeau also emphasized the importance of not paying ransom. G7 nations also showed similar concern believing that paying ransom only continues the business of capturing and selling hostages. His plea for the new policy came after Abu Sayyaf’s recent threat in holding two Canadian hostages, John Ridsdel and Robert Hall. The Canadian government has refused to pay a ransom of $8.3 million for the release of each Canadian. As a result, Abu Sayyaf released a video after the ransom due date, April 25, showing the beheading of John Ridsdel. Should the government have paid the ransom?

Trudeau’s administration responded that paying ransom helps keep terrorist groups, like Abu Sayyaf, in business. Consequently, in a way, the Canadian government would have to sacrifice captured hostages by not paying ransoms, to prevent future Canadian hostages. Facing an incredible ethical dilemma, Trudeau seemed to be very comfortable with this proposition and urged the G7 nations to stand united in this action, “I expressed my firm resolve and the clear resolve of Canadians to prevent the Canadian flag from becoming a target when worn on a backpack around the world”.

When following the G7 Summit, it is difficult not to notice Trudeau’s presence. From handling global economic downturns to enforcing a strict no-ransom rule among the most powerful nations in the world, Trudeau has showed that Canada is no longer on the sidelines. Moreover, Merkel praised Trudeau for Canada’s generous support in welcoming Syrian refugees, despite being so far away from the conflict. The emphasis on Trudeau during the G7 Summit can be attributed to the combination of his innovative ambitions and charming good looks that have globalized Trudeaumania to the point where the Japanese now refer to him as ikemen shusho, or the “hunky prime minister” in English.