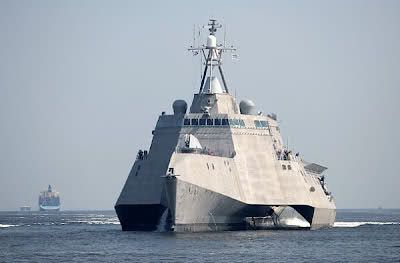 The US Navy (USN) received an early Christmas present last week.  After decades of research, development, reassessments, cost overruns, cuts and production delays, the Zumwalt finally set sail from its pier at the Bath Iron Works Shipyard in Maine.  Sailing out on December 7, it will conduct its first at-sea tests and trials over the coming weeks. The Zumwalt-class DDG-1000 program is part of the next-generation of stealth destroyers, and was launched in the 1990s.  Admiral Jonathan Greenert, chief of naval operations for the USN, praised the Zumwalt-class as being the future of the United–States surface Navy.

Why then is the USN only procuring three DDG-1000s?  Navy acquisition officials originally intended to procure 32 vessels in order to replace the Arleigh Burke-class; including the DDG-51 which has been in use since the 1980s.  At an estimated cost of over US$ 3 billion per ship, the production of DDG-1000s makes for a very expensive Christmas present indeed; one the USN does not think is worth the price tag anymore.  Naval officials have instead chosen to give new life to the DDG-51 program through the Flight III design of a smaller, cheaper and upgraded version of the DDG-51. The Zumwalt-class destroyer’s unique size, stealth hull, technological innovations and increased automation set it apart from the rest of the field.  Measuring 610 feet and displacing nearly 16,000 tons of water, the Zumwalts are the largest ships ever built for the USN.  Despite its size, the new stealth destroyer was designed to have a similar radar imprint to that of a fishing boat.

The Zumwalt-class was designed to serve three purposes.  First, in addition to being a multi-mission destroyer, it can also operate in shallow, littoral water despite its size.  According to John Young, former naval assistant secretary for research, development and acquisition, this feature fills an important capability gap during Navy coastal operations by providing defensive support to littoral combat ships (LCS).  Secondly, the Zumwalts were designed to be powerful battleships.  Their decks are fitted with two 155mm guns with a 63 nautical mile range.  Finally, they were meant to introduce ‘game-changing’ technologies like the integrated electric power system which allows the Zumwalts to deploy self-sufficiently for long periods of time.

Defense analyst Loren Thompson described the Zumwalts as ‘the most revolutionary ship that any nation in the world has built this century’.  Unfortunately, the major technological innovations and design hull boasted by the Zumwalts are very expensive.  The USN spent 13 years and invested US$ 10 billion on the research, design and test phases of the next-generation stealth destroyer program.  According to the Congressional Research Service, while the first Zumwalt cost US$ 4.3 billion to build, the combined cost for the three DDG-1000s has increased by 37%, from US$ 8.9 billion in fiscal year 2009 (FY) to US$ 12.23 billion for FY2016.

Faced with cost overruns, Navy acquisition officials were forced to gradually downsize procurement plans of Zumwalt-class destroyers, finally capping production at three DDG-1000s under the USN’s 2010 budget request. In addition, in 2008 USN officials reassessed the future threat environment and proposed a financially alluring alternative to the Zumwalt-class destroyers. They saw an opportunity to resurrect the DDG-51 program under the Flight III design; an upgraded version of the DDG-51 outfitted with modern features.  The USN calculated they could procure more Flight III DDG-51s for the same amount of funding as the DDG-1000 program.  Although‘Congressional members were incredulous that the Navy could have conducted such a sweeping re-evaluation of the world threat picture in just a few weeks’, Congress approved the change in procurement strategy.  Completion of the first Flight III is slated for FY 2017.

Zumwalt-class destroyers are currently fiscally unappealing.  However, their future is not set in stone despite past divestments.  Many believe that choosing to procure Flight III DDG-51s over the Zumwalt-class DDG-1000s will be a costly mistake in the long run.  For one, because of its size, Zumwalts have a greater capacity than the Flight III design to accommodate upgrades and next-generation weapons.  According to Scott Truver and George V. Galdorisi, the Zumwalts have ‘a 10 percent growth margin, equating to some 1,500 tons of potential increase that would enable the ship to host new sensors and weapons as technologies evolve.’ This capacity to improve on existing technologies and incorporate new ones as they emerge would allow the USN to effectively adapt to future threats.  The Zumwalt-class’ operations and support costs (O&S) are also projected to be much smaller than that of the Flight III DDG-51.  The use of greater automation will reduce the number of crew by half, from 300 to approximately 140.  According to Ben Freeman, ‘over the course of a 35-year service life this personnel difference could save taxpayers $280 million per ship’.  Finally, construction for each Flight III DDG-51 destroyers is projected to cost over US$1.9 billion. Flight III’s smaller growth margins and higher O&S costs led Young to conclude that ‘the cost of a redesigned DDG-51 very likely will be equal to or greater than that of a DDG-1000.’

The USN is confident the Zumwalt DDG-1000 will prove its seaworthiness in the coming weeks, after which it will receive the USS prefix.  If the Zumwalt-class is in fact the future of American surface ships, as Adm Greenert hopes, then the question is when will the USN  fully commit to investing in the next-generation stealth destroyers.  More importantly, will Congress accommodate yet another costly change of heart?