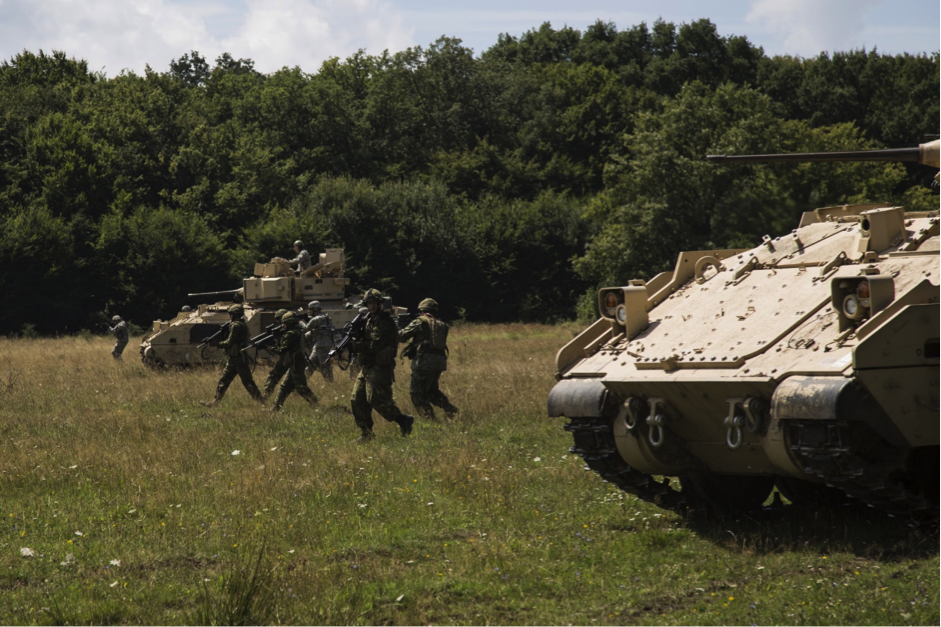 The purposes of Exercise Iron Wolf are two-fold. Firstly, the exercise aimed to test the battlegroups joint response and mobility capacity as a unified force. In the span of 24 hours, 10 convoys with around 350 vehicles were deployed from their base to the exercise. The deployment included 1,400 soldiers. Colonel Mindaugas Steponavičius, Commander of the Lithuanian Mechanized Infantry Iron Wolf Brigade stated that, “… the exercises trained mobility, the ability to quickly reach any area to defend it against any enemy in the territory in Lithuania”. The exercises touch upon one of NATO’s major issue – mobility and speedy assembly. Likewise, the armed forces could achieve higher speed through the participation of various exercises such as Iron Wolf.

According to military planners, if Europe faced confrontation with Russia, only “several thousand of the more than one million troops would be ready for rapid deployment”. The most pressing issue for NATO is the lack of speedy assembly. NATO’s Very High Readiness Joint Task Force, or VJTF, a 5,000-troop rapid-reaction group is able to dispatch very quickly, however, for the rest of the allies, assembling would severely slow down the deployment process. According to a study published by RAND Corporation, the British Army would need three months to deploy to the Baltics and France and Germany could assemble in one month. In addition, NATO planners have assessed that it would take 60 days for a second wave of troops to reach the Baltic states. However, it would take Russia only 60 hours to reach the Baltic states. According to the European Defense Agency, the number of deployable forces amongst EU members “dropped by 13 percent between 2013 and 2014”. In 2014, 27 European countries had 417,000 deployable land forces but only 79,000 sustainable land forces (forces that can be rapidly deployed). One of the main reasons for these recent figures is that sustaining ready forces is expensive and with defence budget cuts in NATO countries, keeping ready forces has proved to be challenge. In addition to funding issues, border bureaucracy and infrastructure also significantly slows down allies. In an effort to solve some of these issues, the EU Member States agreed on the Permanent Structured Cooperation. The goal of PESCO would be to reform, invest and develop defense capabilities. In addition, the EU stated that it would minimize the potential hold up of troops of allied countries crossing into other allied countries. For example, before the reforms, it could take up to 10 days for troops to cross Romania, now it would take allied troops up to 48 hours.

Exercise SCORPION FURY 18, which included 1,800 troops from NATO Allies Bulgaria, Canada, Hungary, Italy, Poland, Portugal, Romania and Spain, aimed at ensuring that the South-East Multinational Brigade has “capability, by planning and executing a NATO Article 5 operation over assigned forces within a command post exercise”. The exercises were conducted at the Joint National Training Centre in Cincu, Romania and included computer-assisted training, live-firings and other field training exercises

The South-East Multinational Brigade is part of NATO’s presence in the Black Sea region. NATO allies agreed at 2016 Summit in Warsaw to increase NATO’s military presence in the eastern part of the Alliance, including the Black Sea region. In part of “enhanced forward presence” initiative, battlegroups led by Canada, UK, USA, and Germany partake in exercises and contribute forces to ensure capabilities on land, at sea and in the air. NATO’s presence in the eastern part of the Alliance is an important development in NATO’s deterrence, defence posture, and collective defense. NATO’s enhanced forward presence became fully operational in June 2017 and since then has been functioning on a voluntary and rotational basis.

Exercise Scorpion Fury 18 and other exercises executed under Enhanced Forward Presence strengthen the troop’s capacity to handle an Article 5 scenario and improve interoperability between allies. The exercises also give the opportunity for allies to identify shortcomings and what areas of deterrence and defence can be improved upon. Engaging in regular exercises is pivotal for NATO as it seeks to consolidate interoperability between allies and continue to demonstrate deterrence. Between 2015 and 2017, NATO conducted 24 exercises, whereas Russia led 95 exercises involving up to 5000 troops each time. Evidently, NATO could increase the frequency of exercises to continue to send a clear message of deterrence.