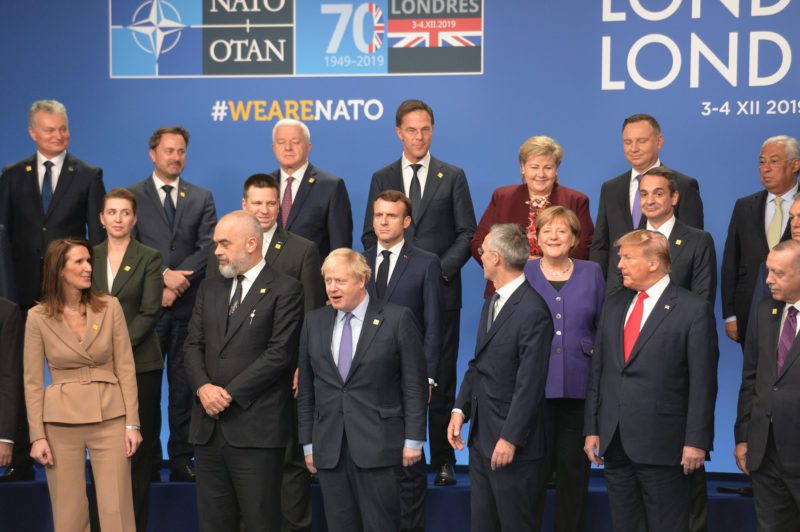 President Trump’s call for NATO members to spend at least 2% of their GDP on defence has attracted a great deal of attention. It is worth noting that the 2% expectation is not a new criterion of NATO’s collective defence. Although President Trump pushed the NATO allies to spend more on defence, so did Obama and Bush. However, their language for expressing frustration with other member states was different from President Trump. In 2006, then-president Bush used the NATO summit in Latvia to encourage the member states to increase their defence spending at the height of the U.S.-led NATO campaign in Afghanistan. Obama spoke about the importance of increasing NATO defence spending when Russia armed separatists in Ukraine and subsequently annexed Crimea in 2014. Obama, in his speech in Brussels, stated that “If we have got collective defence, it means that everybody has got to chip in. And I have had some concerns about a diminished level of defence spending among some of our partners in NATO; not all, but many.”

Irrespective of the arguments made by the presidents of the United States, this essay evaluates whether the goal of spending 2% GDP towards collective defence must be a mandatory criterion in modern politics.

NATO’s engagement in international security affairs beyond being a collective security co-operation against Russia’s aggression broadened in scope following the intervention in Kosovo.  Further, the 9/11 attack shifted the role of NATO dramatically. Such a shift in priorities also changed the geo-political focus of NATO from Eastern Europe to the Middle East and North Africa. Notably, NATO’s military strategies towards terrorism required distinctive changes in defence policies of NATO, particularly in intelligence gathering, conducting pre-emptive attacks, and the use of specific military operational techniques such as missiles and drones, which also changed the overall paradigm of NATO’s operational structures. Such change required particular member states to operate uniquely and strategically at their own cost.  For example, Turkey became the vital member state to collect and share credible intelligence, the role historically played by Estonia and the Republic of Slovakia to share intelligence about Russia’s aggressive plans in Eastern Europe.

On the other hand, understanding the trend of growing nationalism in the West could demonstrate a different perspective to this concern. During the 2016 presidential campaign, Trump was the only candidate openly against the United States paying more than any other member states to NATO. His election campaign was based on chauvinism and welcomed xenophobic views encapsulated by slogans such as ‘America First’ or ‘Make America Great Again.’ When he became the president, he rejected the global order: he pulled the U.S. out of the Paris Agreement, controversially withdrew the U.S. from the Human Rights Council and eventually pulled out the U.S. from the landmark Iranian nuclear agreement. Trump would later go on to further escalate tensions with Iran by killing General Qasem Soleimani.

However, member states that argue against the 2% rule articulate that instead of an unreachable expectation, it is vital to consider effective spending. In responding to the statement made by American Secretary of State Rex Tillerson in 2017, the German Foreign Minister Sigmar Gabriel said the expectation of the U.S. is neither “reachable nor desirable” and he said, “… two percent would mean military expenses of some 70 billion euros. I do not know any German politician who would claim that is reachable nor desirable,” at the first meeting of NATO foreign ministers attended by Tillerson. Gabriel concluded that  “The U.S. will realize it is better to talk about better spending instead of more spending,” that includes humanitarian aid, specific training, investment in research to develop effective security measures and prioritize development and economic aid to stabilize countries and regions of conflicts.

Building diplomatic and long-term strategic partnerships with adversaries is another approach that will de-escalate security tensions and inhibit nonessential expenditure. For example, in 2007, Russia and the United States held a joint military drill, which extended the coordination between the two states and reduced the tensions between the two states to the lowest point in history. Currently, Russia and the United States work together in the International Space Station Program. The relationship Germany maintains with Russia, being one of the biggest importers of crude oil from Russia provides possible grounds to deal with common economic and security issues. Particularly the personal friendship between Angela Merkel and Vladimir Putin provided a unique opportunity for the Chancellor to go Moscow to conduct a high-level diplomatic discussion in the midst of Russian aggression in Crimea, an approach that certainly set a different tone during the conflict. Such examples are evidence that collective defence does not always need to be in the form of military aid, but can also come in the form of opening up dialogues capable of sustaining security.

However, that does not mean that NATO must maintain a friendship with Russia at all costs. Russia has been alleged to be involved in hybrid warfare, conducting cyber-attacks, assuming passportization policies in post-soviet countries and meddling in elections, most notably the 2016 US Presidential Election.

Nevertheless, after five years of suspension due to the annexation of Crimea, Russia reintegrated in June 2019 into the Council of Europe (COE) by the Plenary Assembly of the Council of Europe (PACE) in 2019 voted on new operating rules to enable Russia’s rights to be restored in the cost of the objection by a number of member states of the COE, and to the contrary to the fundamental objective of the institution: to uphold human rights, democracy and the rule of law across the continent. On a joint statement released by the opposed group of the member states, delegates said, that, “This step sends a very wrong signal to the country that has resorted to armed aggression, poisoning of individuals, does not observe human rights of its citizens and does not promote but seeks to destabilize democracies throughout Europe.” According to those delegates, “the future of the CoE is under threat as a whole because the CoE is losing the trust of the people it stands to protect.” This situation is very similar to what happened in 2008.

Likewise, Russia’s latest trade of the S – 400 missiles (air-defence system) to the Turkish government, and the role of Russia in joint patrols with Turkey in northeast Syria also must be seen cautiously. Following the sanctions by the President of the U.S. for the attack against Kurdish forces in northern Syria, the approach towards the U.S towards Turkey eventually became problematic.

Turkey has been a long term ally to the U.S. and Europe. However, following the decision of the U.S. to officially support Kurdish nationalists in Iraq, the hostility between the U.S and Turkey rose. Further, the delay of the U.S. on selling F-35, the denial to extradite Fethullah Gulan,  the biased response of the U.S in standing with Saudi Arabia following the killing of journalist Jamal Khashoggi and the continuous delay of the EU on the request of Turkey to join as a member state have further caused the country to re-evaluate its foreign policy commitments towards Western Europe and North America. For NATO to succeed, it is crucial to resolve the inner conflicts between member states. In the case of Turkey, NATO must recognize the critical role Turkey plays and must recognize and encourage Turkey to continuously cooperate as a strategic partner on critical issues.

On the operational dimension, the member states agree that NATO cannot be limited to the cutting edge weapon system since the operational priorities have been different among the member states. For example, historically, the U.S. entails hard power – deterrence based on the mix of nuclear, conventional and ballistic missile defence capabilities, and it has been expected to remain as a core element of NATO’s overall strategy. However, other countries like Canada have traditionally prioritized investing in peacekeeping missions, humanitarian operations and research developments. As of 2016, Belgium spends 33% of its defence spending on pensions, while France and Germany spend 24% and 17%, respectively.

Also, the states that fall below the 2% spending threshold allege that spending on purchasing weapons and military technologies mainly profits the U.S., which dominates the arms industry. According to the Stockholm International Peace Research Institute, the U.S earned revenues of 51 billion U.S. dollars from its exports, which comprise 88% of overall arms sales in 2017, while the second two countries are China and Russia. Given the fact that NATO, in principle, will not purchase arms from either China or Russia, the states argue such purchase of new arms and techniques mainly would serve the U.S. economic advantage.

Based on the above analysis, this essay concludes that although there have been direct advantages and genuine need for more money to keep NATO running, there are a number of issues that discourage the assertion that such effective operation can only be possible if every member state steps up and contributes 2% of their GDP. Actions such as investing in diplomacy, opening up for new partnerships, and renewing old strategic partnerships are alternative and effective paths for durable security in the broader North Atlantic region.

Janakan Muthukumar a Senior Research Fellow at the NATO Association of Canada. He is also the lead researcher of the NATO Research Group based at the Munk School of Global Affairs and Public Affairs at Trinity College in the University of Toronto. He holds an LL.M in Public International Law from the University of London and a Master in Human Rights and Democratization from the University of Sydney, Australia. Muthukumar has written widely on contemporary politics and international law related to armed conflicts. His research focuses on the temporality of international law, collective defense and counter-terrorism. He is a former Chevening Scholar (2017), Asia Pacific Scholar of the European Union (2015) and a Legislative Fellow at the United States Department of State (2014). View all posts by Janakan Muthukumar →