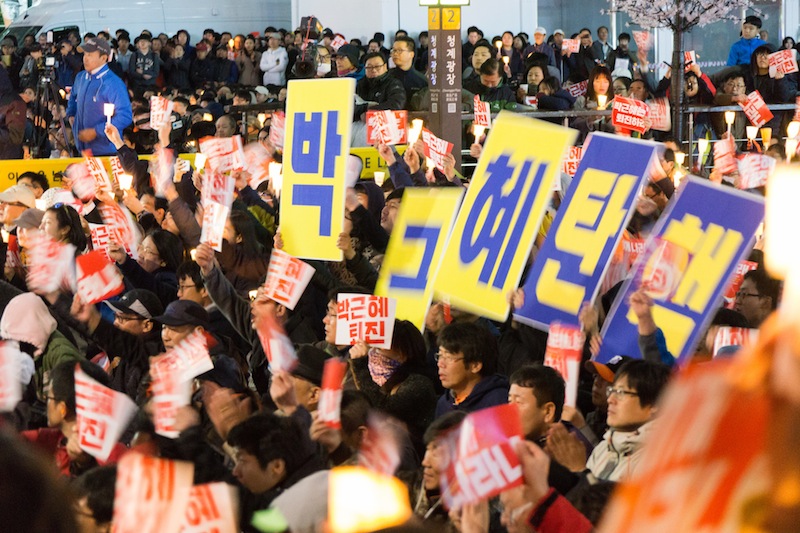 On March 10 2017, a panel of judges upheld the South Korean parliamentary decision to impeach President Park Guen-Hye. In December, Parliament ruled that Park could no longer serve as president due to an ongoing corruption and bribery scandal. She is the first democratically elected president to be impeached in court, and had eleven months left in her term. Many Koreans cheered as the disgraced president left the Blue House, the presidential office, and polls show that three out of four Koreans supported the impeachment of Park. The charges against her are severe, and if indicted she will face legal ramifications for her actions.

Park is accused of criminal activity along with her friend, Choi Soon-sil. Park and Choi met during childhood after Park’s father was assassinated by the director of South Korea’s domestic intelligence service, the KCIA, in 1979. Park became close to Choi’s father, Choi Taw-Min, a cult leader who set up a foundation named the “Church of Eternal Life”.

Choi is accused of accessing secret documents, extortion, and bribery. Prosecutors argue that Choi was able to edit the President’s speeches and influenced the appointment of numerous South Korean officials. Choi extorted over fifty businesses to donate $65 million to non-profit foundations in her power, as they were fearful of government crackdowns if they did not comply. She also forced major businesses to give contracts to firms that were in her possession. She influenced the procession of the 2018 Winter Olympics in Seoul by appointing officials that she preferred, and owns a large amount of land in the Pyeongchang Olympic Village. Lastly, she had access to secret government documents, which were provided by Park.

These illegal activities were widely publicized on November 20, when Choi was charged with offences of coercion, fraud and abuse of authority. During her trial, prosecutors argued that Park was complicit in the actions that Choi was taking against businesses and government officials. Park’s approval rating dropped to 4 percent, the lowest of any sitting president in South Korean in history, and finally in March, the parliamentary decision was made, and Park was forced to leave office.

South Korea is known to be a balancing power against North Korea. The North Korean administration is recently suspected to have assassinated Kim Jong-Nam with a chemical weapon in Malaysia. This bold move is an affront to international law, and in the realm of geopolitics, it is a sign that North Korea is getting stronger but South Korean allies are holding strong against the volatile nation. The imbalance of South Korea versus their counterpart could prove tricky for countries with vested interests in the region.

South Korea and the United States are close military and trading partners. Because of the U.S-Republic of Korea Mutual Defense Treaty, there are thousands of American troops stationed in Korea, and the United States continues to provide funds to enhance military technology in the nation. Given the chaos surrounding the sudden departure of Park, it may take some time for South Korea to centralize power again.

China and South Korea remain at odds over security policy in the region, though both work to ensure that North Korea’s power in the Asia Pacific is limited. China was at war with South Korea during the Korean War and supported North Korea. However, there have been efforts over the past few decades to reconcile, especially in the trade sector, and a People’s Republic of China – Korea Free Trade Agreement was signed in 2015. China is worried about THAAD (Terminal High-Altitude Area Defense System), a US defence technology that is currently being deployed in South Korea, to hedge against North Korean aggression. China argues that it threatens its sovereignty, though with Park gone, the future of this military system remains unclear, as Park’s successor may suspend the deployment altogether.

The Future of South Korea

There will be a snap election in Korea that will determine the next leader, which is to be held within the next 60 days. The Prime Minister Hwang Kyo-Ahn has been appointed as acting president until a new president is elected.

The leader of the opposing Minju party, Moon Jae-in, is slated to win. Jae-in is part of a liberal party and leans centre-left against the governing Saenuri Party. In the context of regional relations, the Minju party takes a more cooperative stance with North Korea and China. Jai-in is a strident critic of Park, and argues that South Korea requires a more ‘balanced diplomacy’ with both the United States and China. The party would subject THAAD to parliamentary approval if Jae-in were to be elected.

The change in political governance in South Korea could lead to the adoption of different strategies regarding its main allies and enemies. Internally, Koreans are celebrating the departure of Park, and many are looking forward to the road ahead in terms of the economy, and the dismantling of cronyism in their government.