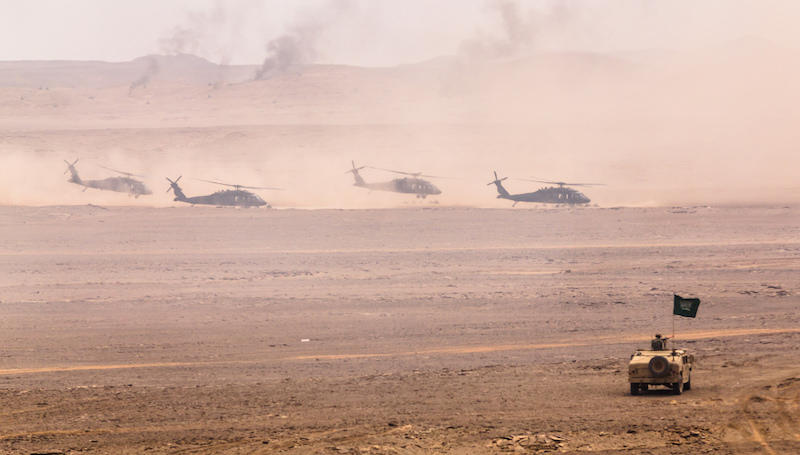 In 2014, the Harper Government signed a $14.8 billion military arms sale to Saudi Arabia. The deal will see an undisclosed number of light-armoured vehicles (LAVs) delivered to the Saudi Arabian National Guard over the course of 14 years. While it was the Conservatives who negotiated the deal, it has been approved to move forward by Trudeau’s Liberal government. Export permits were signed and approved by former Minister of Foreign Affairs Stéphane Dion.

The LAVs that Canada has agreed to produce for Saudi Arabia will be equipped with machine guns, high-calibre weapons and will be capable of firing anti-tank missiles. They will be manufactured by General Dynamics Mission Systems Canada, based in London, Ontario. A sale this large has attracted a lot of attention from Canadians, with a fair share of controversy and opposition. The LAVs were ordered by Saudi Arabia to be used by the Saudi Arabian National Guard, in order to deal with internal conflicts. However, Saudi Arabia has been accused of a long list of previous human rights violations, so there are questions of how the LAVs will actually be used.

Videos dating from 2012 and 2015 were recently posted online by the Globe and Mail, and showed Saudi authorities using LAVs against Shia dissidents and civilians in the country’s Eastern Province. It has since been confirmed that the LAVs featured in the videos were not Canadian-made, however they are similar to the model that General Dynamics Canada is producing. Critics argue that providing these vehicles would further equip Saudi forces to commit more of these crimes against their own citizens.

Earlier this year, a United Nations panel of experts concluded that there have been a substantial number of human rights violations throughout the ongoing conflict in Yemen. The report also concluded that the Saudi portion of the campaign is responsible for the most civilian casualties. It has also been reported that Saudi forces in Yemen used Canadian-made sniper rifles. Sources indicate that 1,300 of these weapons were legally exported to Saudi Arabia, but the Canadian embassy in Riyadh claims they were captured by rebel forces. This has raised even more concern about the legitimacy and safety of Canada’s arms exports to Saudi Arabia.

Canada has arms-control guidelines in place that were designed to put constraints on weapons exports to countries that have poor human-rights records. They also state that no arms shipments can be made to a country where there is a reasonable chance they could be used against that nation’s own population. While there have been no specific justifications provided for how these arms conforms to these rules, it is not the first instance where the rules have been ignored.

Streit Group, a Canadian-owned maker of military vehicles, sold armoured vehicles to the South Sudanese military during the deadly civil war in Sudan in 2012. Those vehicles were not manufactured in Canada, but they were nevertheless produced by a Canadian company. Moreover, Algeria was the seventh largest buyer of Canadian military goods in 2015, but at the time the country was immersed in controversy over violations of free speech. In 2015, Canada also sold $48 million worth of arms sales to China, an authoritarian state that is known globally for systematic suppression of freedom of expression and religion.

Only a few months after the export permits were approved, Canada’s Foreign Affairs Minister blocked a proposed deal with Thailand, a country ruled by a military dictatorship. Mr. Dion did not clarify why the deal with Thailand was rejected while the larger Saudi deal was approved, and only offered a blanket explanation that each contract was decided on a case-by-case basis.

However, in an editorial piece for the National Post, Conrad Black outlined the importance of upholding this deal. He argued that Canada has the opportunity to decide whether it is going to be one of the world’s important powers. This sale is the largest arms-trade deal that Canada has ever negotiated, and if it were to be cancelled the Canadian government would be penalized with a multi-billion-dollar cancellation fee.

The contract also provides a number of benefits to Canada’s economy. This $14.8 billion deal will create approximately 3,000 jobs, which will be secure for the next 14 years, particularly in London, Ontario, where the General Dynamics Canada plant is located and the LAVs will be built.

Most notable in Conrad Black’s editorial is the suggestion that Canada is making progress in the Middle East. By being the provider of these LAVs, Canada will be creating a relationship with Saudi Arabia, which can lead to a more transparent negotiation process and positive changes in the way Saudi Arabia operates in regards to humanitarian issues.

The reality of this controversial deal is that if Canada doesn’t supply military arms to Saudi Arabia, someone else will. However, some other countries have voiced discomfort with Saudi Arabia and began to pull back their support to the country. Germany most recently denied applications from Saudi Arabia for a large request of tanks and rifles. There has also been pressure placed on the British government by human rights advocates to discontinue the export of fighter jets, citing that it is an unlawful trade. Sweden also cancelled a defence agreement with Saudi Arabia in 2015.

There is no ignoring the possibility that Saudi Arabia could use these LAVs in the same way that they have previously used other military arms against civilians. However, there is always the potential for an arms buyer to misuse military weapons in the same way. In this way, the arms industry is a careful balance between what is ethical and what’s economically beneficial.

View all posts by Kathryn Verdoni →