Something Borrowed
As Canada has no established strategy to mitigate the effects of climate change, it must borrow the strategies of other states.

In 2009, Canada pledged at the Copenhagen Summit that it would commit to reducing greenhouse gas emissions by 17% from 2005 levels. The most recent data suggests Canada is experiencing instead an upward trend with megatonne emissions expected by 2020 to be 20% higher than the Copenhagen pledge.

Contrasting this performance with that of the U.S., and data that concludes U.S. national emission levels are already 12% below its peak in 2007; Canada’s emissions are only 6% below its 2007 peak.

Canada must look abroad, and borrow from the strategies of other countries that have achieved greater progress in sustainable environmental policy. Advantageously, Canada does not have to look far given that some of the most realistic policies are coming from our neighbour and closest ally to the south. While many criticize Washington for achieving climate change reduction results bellow targets, it is important to commend the consistency of efforts that have emerged over the past decade across bi-partisan administrations. In 2003, the Pentagon published a report entitled An Abrupt Climate Change Scenario, which urged that climate change be labeled as a national security concern.

Recent years have seen the McCain-Lieberman Climate Stewardship (2003, 2005), a U.S. Congress Subcommittee on global warming (2007), and the Global Warming Pollution Reduction Act (2007). Although none of these three pieces of legislation passed Congress, they represent important efforts in the fight against climate change. While failed efforts may seem wasteful to even discuss, they demonstrate a much more robust effort than is seen currently from the Canadian federal government.

The most recent announcement from the Obama Administration is the emergence of the first-ever national carbon pollution standards limit for America’s existing power plants.

Some of the other strategies taken by the U.S. include: setting the highest fuel economy standards ever in American history, increasing solar generation ten-fold, and decreasing greenhouse gas pollution to the lowest levels in 20 years.

Contrast President Obama’s efforts with the recent comments of Prime Minister Harper in which he stipulates that he feels no additional pressure to keep up with Obama’s increased environmental efforts.

But he should. Especially when we examine Canada’s Continental Action Plan and the way in which Canada is delivering sub-optimal results from said Plan, “Canada’s economy is integrated with the United States’ to the point where it makes absolutely no sense to proceed without aligning a range of principles, policies, regulations and standards… Canada has fully aligned its 2020 emission reduction target to reduce emissions by 17 percent from 2005 levels with the United States. This target has been inscribed in the Copenhagen Accord and is subject to adjustment to remain consistent with the U.S. target.”

Additionally, Prime Minister Harper has expressed that prioritizing climate change will come at too large a cost to Canada’s economic growth and job creation. The Prime Minister fails to address the importance and opportunity for investment in innovation and R&D, some of the most important elements for sustainable and strategic climate change policy and for national prosperity and global competitiveness. In the wake of lacking financial and environmental performance, the head of Alberta’s oil industry has expressed the need for greater innovation in the oil sands industry and enhanced coordination of efforts between stakeholder groups such as universities, corporations and the federal government. 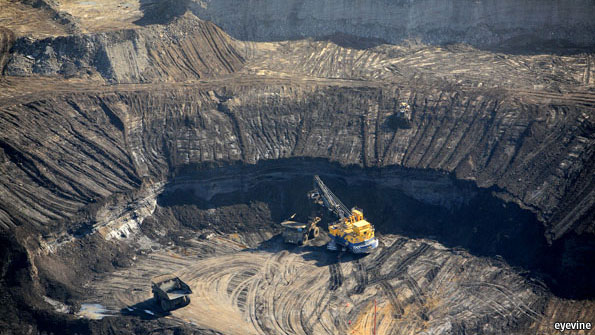 Instead of considering the fight against climate change as one that is separate to economic prosperity, why not deem them as interlinked policies that can be pursued concurrently? How is it that a disconnect remains between the health of natural resources, which remain integral to the sustainability of the Canadian extractive sectors, and global demand for Canadian exports? How is there a disconnect between the need for firmer controls over the emission of green house gases and the overall health and well being of Canadian human capital, its citizens?

With Canadian-pledged targets and intentions delivering suboptimal results, it is difficult to justify a rather passive stance taken by the Canadian government. We are in an incredibly valuable position, as a developed nation with arguably the friendliest relationship to the U.S., to borrowing some of the ideas, values and strategies taken on climate change policy.

The sky and the earth’s waters: the foundation that sustains the collections of our planet’s life forms is beginning to rust and weaken. What remains, as one of my biggest fears for future generations, is that when we sit down with our children and draw an outline of the planet, 70% of that drawing will not be filled in using that royal, majestic blue pencil crayon. Instead, those browns and blacks that once had little use in a colour-in-the-lines-globe will now be the most appropriate choice.

As we seriously consider the commitment towards mitigating the effects of climate change, we have to keep in mind that for which we work. From coast to coast, we have beautiful visual reminders of the importance which the health of this planet holds for the sustainability of our fellow citizens’ health, as well as the health and prosperity of future generations.

When we consider the level of global support that is in place to combat climate change, it is expected that sentiments of optimism and doubts will develop simultaneously. Not unlike the sentiments felt when the commitment to wed has been made, Canada is currently in an exciting but fearful phase as it considers the commitment it must make to sustainable climate change policy. To combat any fears and prepare for its expected commitment next year in Paris, Canada can refer to the four traditional elements that are involved in the preparation of an healthy and indefinite union: something old, something new, something borrowed, and something blue.

The Future of the UN Security Council (Part II): The Reform Paradox