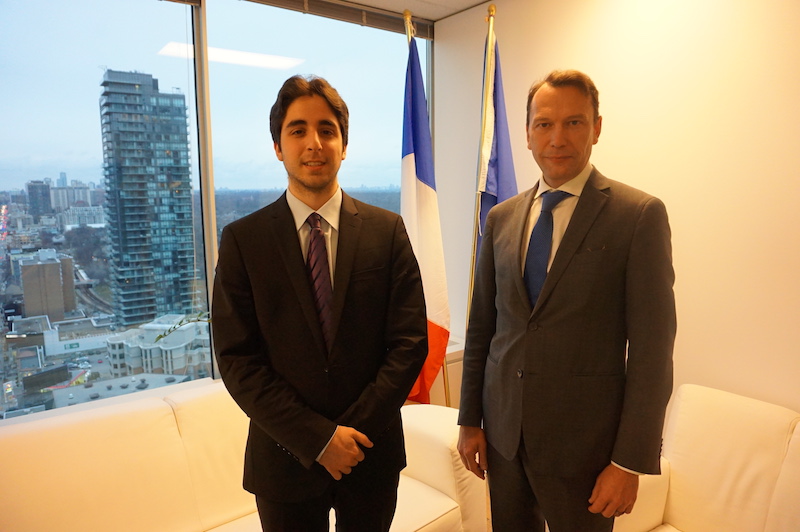 Marc Trouyet has been the Consul General of France in Toronto since 2015. After receiving his Bachelor’s degree in Political Science and Master’s degree in Town Planning, he graduated from l’École nationale d’administration (ENA). With a diplomatic career spanning 15 years, Marc Trouyet has extensive experience in policy concerning migration, development, and crisis management. He was Deputy Permanent Representative to the French United Nations Mission in Rome, during which he worked with the World Food Programme alongside various NGOs to coordinate the delivery of humanitarian aid to impoverished communities. In addition, he served as head of the Department of French Overseas Development Assistance (ODA) in Paris, and Deputy Head of Mission of the French Embassy in Australia.

Michele Di Leo had a chance to sit down with Marc Trouyet to discuss the most interesting aspects of his diplomatic career, as well as France’s efforts to combat terrorism and promote peace and multilateralism.

As the Consul General of France in Toronto, what are some of the most rewarding aspects of this job?

MT: Definitely meeting people and being a bridge-builder. My job is to make people from France knowledgeable about the opportunities here. I have been meeting many tremendous people so that’s very much a real pleasure. Also, there is the opportunity to be a part of the vibrant Francophone community here in Ontario and Manitoba.

How did your personal and educational background influence your decision to join the Foreign Service?

MT: I come from a modest background, from a region called Provence in the southeast part of France. I am what we could call a product of the French school system. Thanks to that school system, I graduated from good institutions. I went to Sciences Po and then I moved to Paris to pursue my studies. I eventually went to the École nationale d’administration (ENA) through which I entered the Foreign Service.

If I am not mistaken, the ENA is renowned for producing many of France’s civil servants and specifically, its diplomats.

MT: It’s one of the grandes écoles. In France, they are the best known universities; and as for ENA, you access this school only after you complete a Master’s degree.

What have been some of the most memorable moments throughout your diplomatic career?

MT: I would just pick some of them which have been emblematic of the activities I had. One of them was when I was working with UN Habitat to help it frame what basic public services should be. One time we had discussions in Nairobi, where the headquarter is located, and we had successful negotiations with other delegates regarding how to proceed in creating public services. UN Habitat was struggling with this mandate but that was a clear moment of success.

Another one was later when I served in Rome. I served with a humanitarian agency to the UN, the World Food Programme (WFP). One time we had a field trip to Malawi and Zambia. In Malawi we visited people that were benefiting from support of WFP, especially in the AIDs-afflicted regions. We were welcomed so warmly despite the dire situation. It was quite a heartfelt moment.

A third memory is when I was posted in Australia. We received a French delegation from New Caledonia. There are a lot of issues and discussions about the upcoming referendum in New Caledonia on self-determination. It was fascinating to have discussions with all the delegates from New Caledonia. They presented themselves to the Australians and explained the issues and processes at stake. It was a very eloquent presentation on the commonalities of our values and benefits of our cooperation.

France is an important international actor, especially when it comes to its involvement in Africa. Can you talk about the role that Africa plays in French foreign policy?

MT: It is certainly the place where the future prosperity of Europe and indeed France lies. We must bear in mind that this is a place where there is the most significant demographic growth and in the second half of the century, the most economic growth. We know that we are going to exchange a lot from a people-to-people perspective, but also from an economic and security point-of-view. We know that we are bound to Africa for the future and there are still a lot of French communities in African countries. Of course, we do have a sense of responsibility because we have been engaged in Africa for centuries. We just had an internal gathering of Ministers in France after which we committed $20 billion from 2014 to 2018 for development assistance in Africa. And we are working with our African partners to safeguard security and peace on the continent, especially in the Sahel region.

Africa is also one of the major sources of migrants to France. How is France managing the influx of migrants?

MT: We are trying to manage it in the most comprehensive manner and by that I mean along with our European colleagues, because this is an issue which Europe faces as a whole. Back in 2014 the EU put in place a summit between European and African leaders through which we addressed this issue of illegal and economic migration. We collectively allocated resources to address the issue of illegal migration and human trafficking.

What other foreign policy issues in France is focusing on now?

MT: In addition to Africa, climate change is certainly a key issue. We see climate change as a generational challenge. We know that we have to change our ways of consumption and production if we are to achieve a sustainable developement in the world. We have launched many initiatives for the business community and for local government to pursue. We have a development agency, the AFD (Agence Française de développement), which has committed over $5 billion in funding for climate-related development projects throughout the world (and largely in Africa).

There is also of course the EU. Not only because this is our neighbourhood but because it is our political future and destiny. We are dedicated to making the EU an efficiently-functioning body that is politically significant for the people.

Just talking about the EU, France is going to have its Presidential elections this year and the euro-skeptic Front National has a chance of winning. Is this of concern to you?

MT: What is worrying is that we are witnessing in all Western democracies the emergence of what a British political scientist calls “post-truth” democracies. We are in an era in which experts are no longer the legitimate persons to speak about policies. More and more, the debate is dominated by people who are taking liberties with facts. At the end of the day, democracy should be about debating propositions based upon facts and driven by values.

Do you worry about the unity of the European Union?

MT: I am a firm believer that the European Union will be standing 50 years from now. The people that created the Union almost 60 years ago had an important political vision embedded in economics. Of course Europe is facing a lot of challenges but if you look at some of the recent positions of the European Council, the EU Member States are sticking together when preparing the up-coming negotiations  with the UK about the Brexit. In particular, they emphasized that there are four liberties that are crucial to the European Union, including the free movement of goods, workers, services, and capital. One cannot pretend to one without allowing the four of them.

One of the most important policy issues in France has been security and terrorism. What are some of the initiatives that France has implemented to counter this terrorist threat?

MT: Many policies have been put in place to reinforce the capabilities of law enforcement. The military has been mobilized to provide more boots on the ground to protect potential targets. There have also been more capabilities for law enforcement to track down potential terrorists in order to apprehend them just before they commit their act. It is difficult because to a certain point you cannot apprehend someone before they actually do something. You have to gather sufficient evidence that they are going to commit a crime before arresting them. At the EU level, there has been a reinforcement of cooperation among the different agencies in Europe.

Canada and France are allies and both are NATO countries. Can you talk on the relationship between these two countries?

MT: This relationship is one of the longest and most friendly in international relations. The relationship between France and Quebec provides a specific flavour as well. The French language and French people have been migrating to Canada for at least 400 years. There are more recent links dating back to the two World Wars, especially looking at the battles of Vimy Ridge and the storming of Normandy beach. We are grateful to Canadians for these commitments and sacrifices; that is why we have been awarding the Legion d’honneur to over 1000 Canadian veterans. There are also tight economic ties; many French people are coming to Canada and with the implementation of the CETA agreement in 2017, France will be a privileged partner of Canada.

What would be your advice for those interested in a career in diplomacy?

MT: My first recommendation would be to try it. You have to be prepared to start all over again every 3-4 years. Your family has to move around to places where you don’t know anybody. You have to make new friends and build new networks. You really have to enjoy it. You have to be sure that this is what you want your life to look like. Then of course, you must learn languages in order to get to know people from the communities a little bit more.

Would you like to leave any final words for our readers?

MT: I would like to say that we need internationally-minded people these days. We believe that Canada has an important role to play on the international stage. We need a partner to make the world a better place, so we need more Canada in that regard!