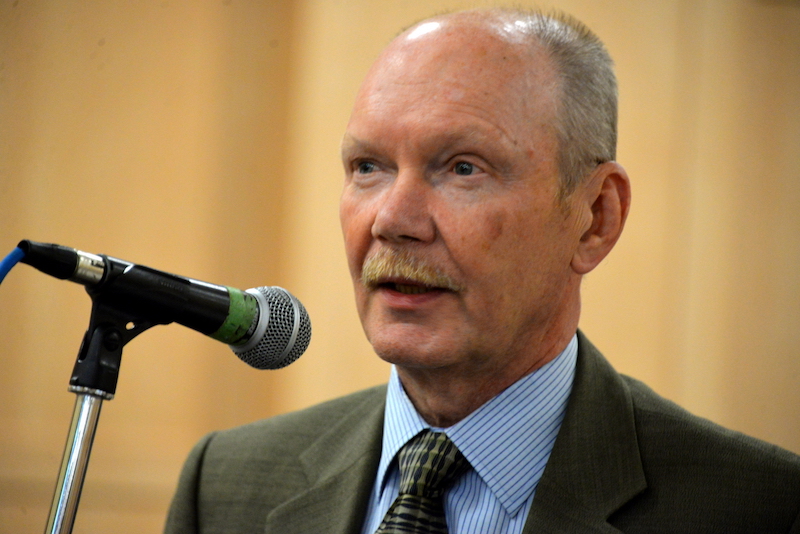 Andrii Veselovskyi is currently serving as the Consul General of Ukraine in Toronto. Prior to this, he held senior positions in the Ministry of Foreign Affairs of Ukraine, including as Ambassador to Egypt, Kenya, and Sudan. An expert in European affairs, he was Ukraine’s Deputy Foreign Minister from 2005 to 2008, during which he played an integral part in expanding Ukrainian relations with the European Union, before eventually becoming Ukraine’s permanent representative to the European Union from 2008 to 2010. He graduated from Taras Shevchenko National University of Kyiv in 1974; in addition to his native Ukrainian, he is fluent in French and English.

Michele Di Leo had a chance to sit down with Amb. Veselovskyi to discuss the reasons behind his decision to become a diplomat, and why he believes that Russian aggression in Eastern Ukraine has ramifications for Canada’s security and global stability.

Could you begin by discussing your personal and educational background, and how that influenced your decision to join the Foreign Service?

AV: I was born in Lviv, then my parents moved to Kiev. Both of my parents were interested in literature, history, and intellectual questions, but they were both agriculturalists by profession. They brought part of this interest to me and that is why I was exposed to different things which promoted an interest in diplomacy.

I learned French in school and it eventually got to a proficient level. I can remember this occasion when I was in a youth camp and there were some foreigners there who only spoke French. I was the only person in the camp who could translate. I felt so supportive and useful that I decided that I would go into diplomacy. It was the Soviet Union so it was very difficult to skip from languages to diplomacy. I managed but it was not easy.

You eventually became the Ukrainian Ambassador to Egypt, Kenya, and Sudan. What were the most important policy issues that you dealt with?

AV: Ukrainian interests in Egypt were quite deep. Many Egyptians studied in the technical and military institutions in Ukraine in the Soviet Union. I have also met thousands of Ukrainian women who married Egyptians that studied in Ukraine, and then went to live in Egypt. Some Ukrainian economic products are also beloved by Egyptians, including wheat, sugar, and steel. This gave Ukraine a special place in Egypt and I was posted here from 2001-2006. I managed to bring these relations to a new level not because of my specific capacity, but because there was a window of opportunity. Ukraine at this time was becoming more productive as other competitors were weaker. I remember that the turnover of trade between Egypt and Ukraine during my tenure jumped from $300 million to $1 billion. I tried to be helpful in these questions while young Ukrainian companies were forming.

As for Kenya and Sudan, I was the first Ukrainian Ambassador to these countries so it was an opening up of relations. Ukrainian energy companies started to look around to find new ways of securing gas and oil for Ukraine because of the increasing problems with Russian federation. From that time on, particularly from 2001-2002, Russia started to make Ukraine more dependent on energy. Ukrainian companies looked at countries like UAE, Kenya and Sudan. Unfortunately, the internal situation in Sudan as well as technical questions were not positive enough so we didn’t get there. Still relations were enlarged and we opened up trade in different areas with both these countries.

When you became the Deputy Minister of Foreign Affairs, what were the important geopolitical matters that you had to confront? I assume that you were also dealing with Russia more at this time.

AV: From the very beginning, it was never a pleasant moment to deal with Russia. It was in 1993 that Russia claimed Crimea and Sebastopol. At that time, Russia was weak and not as arrogant as it now. But with the support of the UN, we managed to stop this. The second time they did it in was 2001-2002. They wanted to grab an island which was Ukrainian, so the President of Ukraine at that time came to this place and he demonstrated that the Russians would have to move him too.

I remember discussing with the Deputy Prime Minister for Russia. He said, “The more you deal with Russia, the less you trust it.” The policy for the Russian elite did not change since 1991. They did not understand that there is no more Soviet Union. There is no more dictator and subjects. There are equal sovereign states. They did not understand that so we are seeing the results today.

My sphere of responsibility as Deputy Foreign Minister was Europe. This included dealing with relations between Ukraine and EU, the area around Ukraine, so the Black Sea, the Mediterranean, former Soviet Union republics, and Eastern Europe. As I call it, ultimate security matters. It was a very challenging time for me because it is a different level of responsibility and I was dealing with both the EU and NATO. It was also a possibility to understand the strategic challenges for Ukraine.

With all the experience and knowledge that you have of Europe, are you worried about the future of the EU? What’s your take on current political events?

AV: Because I was involved with the EU, I know there were other situations when the EU almost broke up. In 1999, and later, when they tried to work out a constitution. Brexit is another challenge, but the idea that European nations cannot individually withstand international competition is so deeply anchored in their minds. I don’t think the EU would break up, but it’s definitely undergoing some changes. The European Economy is also much stronger if it is united, rather than if it has to compete amongst itself, and with other countries. This economic reason is a cause for cohesion, whatever form that may be.

In regard to Brexit, we can also think about how the youth voted over 70% in favour of remaining in the EU.

AV: Yes, and the “Remain” side won in the biggest cities as well. It’s too early to call.

We’re seeing that America, despite President Trump’s comments, remains firmly committed to the Transatlantic relationship. Has this been more reassuring?

AV: President Trump was issuing strange statements before becoming President and he is issuing different statements now. I think his assessments of NATO were made on the basis of general knowledge, but once he got into the office and was given classified information, he started to see the situation differently.

The second point has to do with institutions. All potential possibilities for any human being in the world exist within a net of relations and rules. So it is not just General Mattis’ words which reassure me, it is the presence of strong institutions in America including the Department of Defence. Other institutions also add their say and that forms the basis for policy. Trump goes along with the policy and rules which have been worked out within all American institutions and administrations.

There have been reports of an escalation in fighting in the Donbass region. How is Ukraine managing the conflict at this time?

AV: Unfortunately, it’s because of so many other things happening around the world that Ukraine is a small place in the grand scheme of things. But it is dealing with a very important principle: national sovereignty is to be intact and protected by international law. Also, nobody can grab territory unilaterally, which Russia did. They recognized their annexation of Crimea, while they do not recognize their presence in the eastern part of Ukraine. We have prisoners who have been documented as Russian officers, and evidence of the use of Russian armaments produced only in Russian. We have testimony, footage from drones, intelligence, etc. This is the first point, they violated international law.

The second point is also very important. Ukraine signed the Budapest Memorandum upon which it gave up its weapons of mass destruction. For that, it was supposed to get reassurance from the U.S, Britain, France, China and Russian Federation that they would respect its territorial integrity. It’s a strong signal that nobody is immune because international law is not respected. It is an incentive for Russia, Iran, Pakistan, North Korea and whoever else. What would you think about a world with 20-4 nuclear powers threatening each other?

Canada prides itself on being one of Ukraine’s strongest allies. What words would you would offer to our government concerning Ukraine?

AV: I am glad that, independently of whichever Canadian government, they maintained the same line.  As for Minister Freeland, her commitment to international law is well-known. From an international relations point-of-view, Canada’s position was necessary and firm. What the Canadian government did two years ago was very important in supporting Ukrainian military forces. They have sent 200 specialists who have trained Ukrainian forces with NATO equipment, regulations and capabilities. This help is very important and should be continued. That is why the decision of the government is necessary.

My advice would be to take quick decisions in order to ensure that the forms of support can come and continue this work. The knowledge of Canadian trainers is unique and very supportive for us.

As the Consul General of Ukraine in Toronto, what would be your message to all Canadians in terms of how they can assist Ukraine?

AV: For a long period, Canada was a shining castle on the hill. A peaceful country with many natural resources, an excellent environment and good human relations. Suddenly, the world started to come closer and closer to Canada. It came closer in the military sphere and in cyber war, and it came closer unfortunately in things like terrorism as demonstrated by the incident in Quebec. The dangers of a different world are coming closer to Canada. In that sense, Canadians are becoming more involved in the world. Please look at the example of Ukraine as a danger not only for Ukraine, but for Canada as well. As soon as the basic rules of international law are violated without punishment, they will be violated again.  My hope is that Canadians will continue to understand the importance of participating in world affairs even stronger.