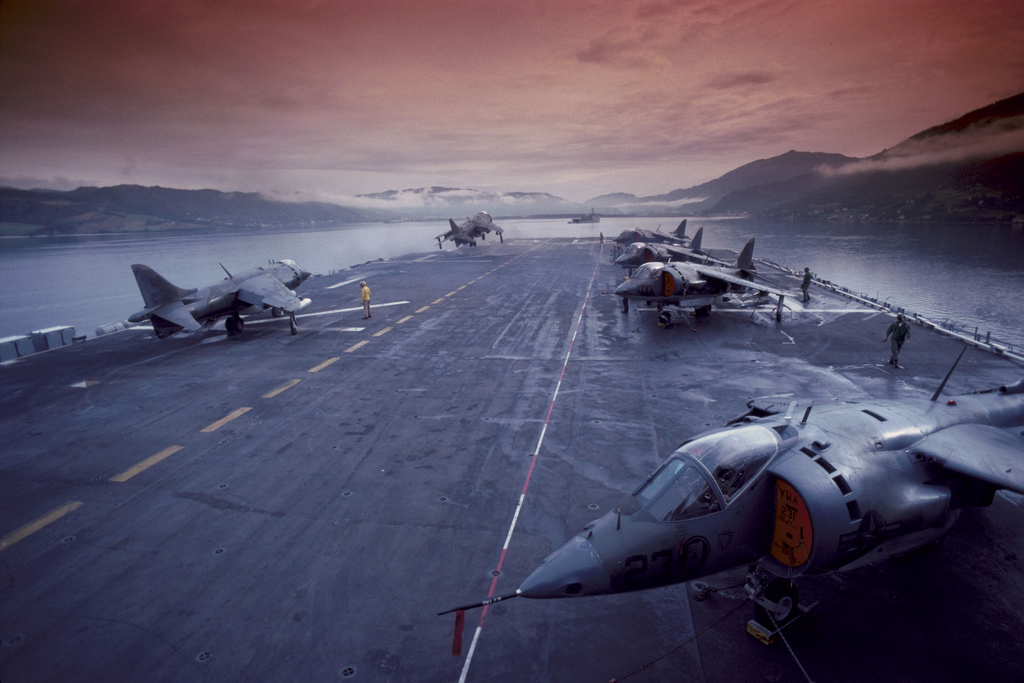 Ever since the North Atlantic Treaty Organization was founded, the relevance of its existence has been subject to much debate. In fact, the first event ever hosted by the Atlantic Council of Canada – now the NATO Association of Canada – was entitled ‘Is NATO Obsolete?’ Following the end of the Cold War, many predicted the disintegration of NATO following the dissolution of the Soviet Union – NATO’s nemesis and raison d’être. However, the Alliance has continued to exist and has evolved to meet contemporary security and military challenges.

Nevertheless, is NATO fundamentally obsolete as presidential candidate Donald Trump suggests? Is it a military alliance in search of a reified security function? Or has it evolved enough to remain a relevant organization in transatlantic and international security? The NATO Association’s program editors and research analysts weigh in.

David Sutton: NATO is not obsolete, but it does need to retool and refocus

At the centre of the World Economic Forum’s Global Risks for 2016 are unemployment and profound social instability. These two issues are strongly connected to what the forum listed as the greatest short-term threats: state collapse, large-scale involuntary immigration, and interstate conflict. As it stands, NATO is experienced and equipped to react to conventional security threats.

What NATO should and can do is place greater emphasis on Article 2 of the North Atlantic Treaty, which states:

The Parties will contribute toward the further development of peaceful and friendly international relations by strengthening their free institutions, by bringing about a better understanding of the principles upon which these institutions are founded, and by promoting conditions of stability and well-being. They will seek to eliminate conflict in their international economic policies and will encourage economic collaboration between any or all of them.

Stability and well-being should be as much of a priority for NATO as is reacting to the consequences of instability and conflict. NATO is an ideal organization for this purpose, as it is less encumbered than the UN in terms of bureaucracy, its member states constitute the wealthiest and more technologically advanced nations in the world, and it has the logistical capacity to support large-scale operations anywhere in the world.

In the past, NATO has strived for stability through security by responding to threats and attempting to deal with states as conflicts emerge. NATO could better achieve its goals if it coordinates efforts between member states and other international organizations to develop the economies and institutions of other nations, thereby reducing or eliminating the possibility of threats.

Security through stability, while not a solution for regions already in strife, could shore up other areas to prevent the spread of instability and to enlarge the global capacity to endure and respond to emerging threats.

Recently, U.S. presidential candidate Donald Trump raised the question: is NATO obsolete? He believes the U.S. is “getting ripped off by every other country in NATO. They pay almost nothing.” Furthermore, he believes NATO should be “readjusted to take care of terrorism.” But his prescription depends on what he means by “readjusted.” It is reasonable to say that the U.S. does the majority of the heavy lifting financially. Except for the U.S., only the UK, Estonia, Greece, and Poland spend more than 2% of their GDPs on defense, while 23 other NATO states do not.

On the other hand, saying that other NATO members do nothing is false. In 2016, NATO states conducted a variety of missions including peacekeeping, counterterrorism, counter-human-trafficking, counter-piracy, security assistance, and air-policing the skies of Eastern Europe. These missions took place in Kosovo, the Mediterranean, North Africa, and Afghanistan.

What Trump seems to forget is that NATO is a consensus-based alliance, where decisions reflect the collective will of the members of the Alliance. All member states are not required to participate in every operation. For example, both Germany and Poland declined to be directly involved in the Libya operation in 2011.

Moreover, a military alliance that is not directed by every member is an authoritarian structure, which would bring fear and intimidation to member and non-member nations alike.

Detractors of NATO often mischaracterize the defence spending “hegemony” of the United States in the Alliance.

According to Trump, NATO is “extremely expensive for the United States, disproportionately so.” Of the total defence expenditure in NATO, U.S. defence spending represents 73% of the 900 billion USD. However, this figure is misleading. Much of U.S. defence spending goes into maintaining operations, partnerships, and military bases well outside North America and Europe. On the other hand, European NATO members are generally geared toward territorial defence and possess limited expeditionary capabilities.

However, even this as an explanation is misleading, because it is not exactly what the debate is about. With the exception of Iceland, European members do take responsibility for their own defence and have their own standing armies. This is not the point of concern. It is the disproportionate burden shared by the U.S. in providing certain expensive yet essential capabilities that concerns officials in Washington and Brussels. These essential capabilities include aircraft carriers, fighter jets, bombers, heavy airlift capabilities, and sophisticated intelligence, surveillance, and reconnaissance systems.

The solution to this problem is simple: European NATO members and Canada should endeavour to spend 2% of their GDP on defence. In terms of total expenditure, this would add another 110 billion USD to the existing 900 billion total spending in NATO. With that amount of funding, the size of the British Armed Forces could be doubled or the U.S. Marine Corps could be funded for two years. In terms of essential capabilities, 110 billion could drastically improve NATO’s strategic landscape.

Steps have been taken in this very direction. 18 NATO member states are increasing their defence budget while the rest have stopped slashing military expenditures. However, the size of budgets will only gradually increase, and capabilities will be expanded in the long term as more emphasis is placed on research, development, and materiel procurement.

In the meantime, the focus should be on ensuring that the additional funds are allocated to expanding essential capabilities. That is how NATO can be made great again.

I think the better question is not whether NATO is relevant, but how NATO is relevant. It was introduced originally “to keep the Russians out, the Americans in, and the Germans down.” It has evolved due to historical circumstances into a general framework for military cooperation, broadly brushed, among like-minded states.

The third phrase of the original intent as colloquially stated is again valid. But the continued historic relevance of NATO remains the commitment to a framework that allows members to consult, cooperate, and even occasionally coordinate among like-minded states with relatively interoperable militaries.

At the very worst possible assessment, NATO is a functioning, real institution, and political history tells us to be very reluctant to throw away such a thing – as the Japanese discovered with their Emperor in 1867, and rediscovered in 1945.

Donald Trump’s assertion that NATO is ‘obsolete’ largely ignores the transformation that the Alliance has undergone since the collapse of the Soviet Union in 1991. The Alliance has not only sought engagement with Russia, but has brought many of the former Soviet Republics under its belt as members. Additionally, given changing security dynamics in the Middle East and North Africa, NATO’s evolution as a global security actor appears to be keeping up with the times. As outlined in the Alliance’s Readiness Action Plan, which was unveiled at the 2014 Wales Summit, the Alliance’s mandate has shifted from one of Soviet containment, to one of adaptation and assurance.

The significance of this expanded action plan is this notion of ‘assurance,’ and how exactly it has fit in with the Alliance’s response to Russian re-assertiveness in the Caucuses and Eastern Europe. Assurance entails the deterrence of military threats through the continuous presence of air, land, and maritime assets in the territory of the Alliance’s most vulnerable members. Given Russian actions in Ukraine, trying explaining to one of the Alliance’s Baltic members that economic considerations led to the end of the air policing missions that have proven to be so vital to their security.

Finally, given the security dilemmas that its allies face, and the security guarantees that NATO membership has afforded them, the Alliance plays a valuable role in maintaining global peace. A case in point is the recent flare-up between Russia and Turkey along the Turkish-Syrian border, which culminated in the downing of a Russian fighter jet by Turkish forces. Had efforts not been made to reassure or encourage restraint on the part of Turkish authorities, it is likely that the situation with Russia would have escalated further.

Don’t get me wrong, there are still a number of security dilemmas, including growing threats from cyber space and Islamic State terrorists, that the Alliance was not traditionally set-up to contend with. However, as existing structures and NATO programs are demonstrating, the Alliance’s capacity to combat these threats to the security of its members is growing. So to view the Alliance’s utility from the standpoint of economic costs underestimates the multitude of challenges whose management will require NATO involvement.

Since its inception, NATO has been an important component of Canadian foreign policy. In fact, Canada was a very involved member state during the early stages of the Alliance by initiating a Science program for NATO. The basic foundation of the Alliance stands on the belief of promoting peace, prosperity, and stability in political and economic settings around the world.

While founding principles and values are timeless in their relevance, perhaps the practice of these principles can be outmoded. When NATO was first founded, Lester B. Pearson stated that it was an organization “born out of fear, frustration and hope.” There was fear of Soviet aggression, frustration born out the ineptitude of the United Nations, but also hope in creating something more than a “narrow and old fashioned military alliance.” However, over time, its duties can become shrouded in military exercises and force integration. Therefore, NATO should consider expanding the scope of its duties and it should contemplate greater involvement in economic and political development around the world.