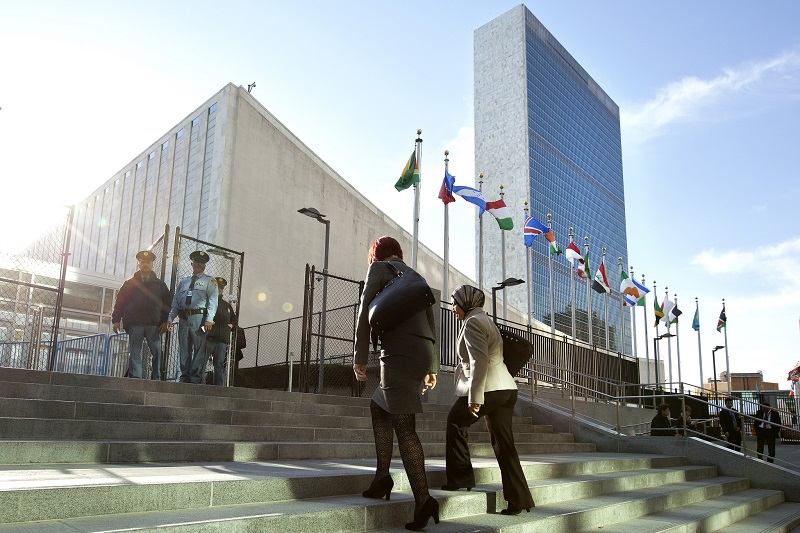 In light of the 16th Anniversary of the implementation of UNSCR1325, are we progressing towards gender justice in security, and how are you encountering gender as a concept and a practice in your respective programs?

I feel that we are progressing towards gender justice in one sense; more women are seen in high level positions in international organizations. However, in terms of equality for people of all genders, we still have a long way to go. Gender-based discrimination and violence, especially during conflict needs to be addressed more in international conferences as well as the media that covers them. Isolating and/or hurting someone because of their sexual orientation or gender is an inhumane action, and shows a complete lack of civility. It is our duty to educate people of this fact, no matter their nationality, religion or political leanings.

While it makes an impact when an assault is publicized, the stigma associated with the victims haunts them for life. That needs to change. Societally, there needs to be an end-to-end support system for victims when in war, where they can lodge a complaint if they are harassed, have the perpetrator swiftly punished as well as provide a psychological/medical support system to recover from the event.

Such changes will need combined participation from warring sides, local officials as well as international media. It is imperative that we define and practice the rules of conflict, and strictly leave out gender-based violence as a tool or a consequence of war. If we work together in order to provide a safe environment for all human beings to thrive, no matter the differences or the wars we choose to fight, we can perhaps, more honestly gauge our progress.

The 16th anniversary of the implementation UNSCR1325 provides an opportunity to reflect on the progress that has been made – and the progress which remains to be made– on issues of gender equality. Specifically, this resolution is concerned with women’s roles in “security” – a broad term open to diverse interpretation. Over the past sixteen years, there has absolutely been progress made towards a better understanding of the ways that conflict, and post-conflict processes, impact men and women differently.

I firmly believe that the effects of conflict can be better addressed when they are considered through a gender lense. Considering how women living in areas of intense conflict and violence are impacted differently than men by these experiences allows these specific impacts to be addressed more carefully, potentially with better results. In this sense I think that substantial progress has been made in important areas, such as efforts to protect women against gender-based violence, or the various initiatives underway to give women better access to healthcare and education.

The resolution also involves making greater efforts towards including women in peace processes and post-conflict reconstruction. Again, I believe progress has been made here, but there is still plenty of room for improvement. Very little progress can be made on issues primarily affecting women in the post-conflict reconstruction process if women are not given a seat at the table. Still, it is not uncommon for the groups of political elites, military figures, and foreign policy makers tasked with addressing these issues at top levels to be comprised of mostly men, with little consideration of the fact that leaving women out of this dialogue means missing a crucial piece of the puzzle.
In short, has the implementation of UNSCR1325 improved issues of gender equality and women in security? Yes. Is there still room for improvement? Absolutely.

Since UNSCR1325 was implemented 16 years ago, efforts to increase gender equality has made strides in political culture and policy in Canada. Though Canada is not a country that has known armed conflict domestically for many years, since the implementation of UNSCR1325 in 2000, a number of governmental institutions have made efforts to reduce gender discrimination.

In recent years, the Canadian government and Canadian agencies have implemented policies to work toward reducing gender discrimination and gender violence in Canada. Some of these initiatives include: The National Inquiry into Missing and Murdered Indigenous Women and Girls that addresses the problem of overrepresentation of Indigenous women in murdered and missing-persons cases, the class-action lawsuit that the RCMP just settled with hundreds of women who were sexually harassed or assaulted when serving in the RCMP, and the Trudeau government’s introducing the first gender-equal cabinet in Canadian history.

It is positive to see the Canadian government introduce initiatives that specifically target sectors of the government and society where Canadian women have faced systemic injustices. But these strides will certainly be limited in the initial scope of women that they protect and effect, especially given that they are new initiatives looking to correct long-standing injustices. My hope is that the government does not assume that, now that it has implemented these initiatives, its efforts to promote gender-equality in the country are over. Targeting the systemic problems of inequality and discrimination that affect the diverse women of Canada is, and will have to be, a constant topic of review and importance in the government’s agenda for gender equality to reach the breadth of Canadian society.

Given that gender parity is a new topic of substantial political importance in Canada, only time will tell whether these initiatives are effective or if they are simply a promotional tool.

I think to address the issue of gender justice we have to question if the UNSCR1325 has done what it was supposed to do, namely to recognize and implement a women and gender perspective to peace building and conflict resolution. But to answer such questions we have to inquire about how we have encountered gender in such perspectives thus far.

What is gender, then? Gender is multiple. It is not just about addressing questions of men and women relations, but it is about englobing a wider array of life categories, that can be all discriminatory and empowering depending on each individual and societal contexts. For a white woman living in a so-called developed country, but who is homeless and queer, and a straight woman of color living in the upper class neighborhood of a developing country, the experience of what it means to be a woman will intrinsically differ. And I think it is one of the elements that we’ve been missing in the implementation of UNSCR1325. We still have some way to go to address the issue of gender justice as a whole, and change perceptions.

In fact, I can’t help but observe that many declarations from the resolution mirror underlying stereotypes that peace is intrinsically feminine. Women are apparently more likely to appease violence and extremism, so we should include them. Right, we’re more likely to be more caring because we carry babies. Did I mention some women can’t deal with kids, or caring in general? Thus, women are inevitably kept in stereotypical roles constructed by society.

While striving to change perceptions of women as victims and focusing on a vocabulary of agency and empowerment, Canada’s address to focus development aid towards girls and women, left behind many other elements of discriminated groups such as young transgendered boys and men, and the wider LGBTQ community. Which left me wondering, what happened to the UN Women “HeforShe” campaign, the idea that including men and boys in the discussion was going to bring more change?

However, if I extend that inward-looking analysis further, we have to admit that the Canadian Armed Forces (CAF) have done a great deal to address the issue of sexual harassment and gender relations in the military (compared to others), one of the main actors to be kept accountable in peace-building operations and conflict resolution. CAF recently launched Op-Honour, an operation that is supposed to sensitize all ranks of the armed forces to a wide array of societal questions such as multicultural relations, gender relations, religious inclusion, but especially sexual harassment. But was it pushed by the UN resolution? Not really; its launching was based on the 2015 Deschamps national report on sexual assault in the military.

So, has the UNSCR 1325 helped bring a women and gender perspective? It has done a great deal to bring gender discussion to the forefront of policy-making, but we still have a long way to go. Recently, a new scorecard was launched to make sure countries take actions and are made accountable for their efforts, but its utility still has to be proven.

Indubitably, 16 years of commitment of the UNSCR1325 has brought a strong focus on women, but I would refrain from saying it took a gender turn to the issue of peace-building and security. At this rate though, the gender justice that the UNSCR 1325 has been striving to implement for these past 16 years, is more likely to happen when I’m old and retired, and that’s a shame.