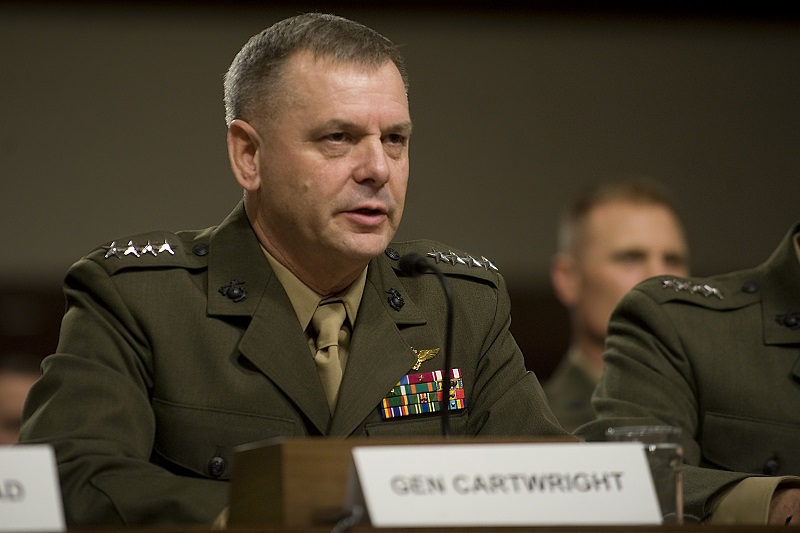 Touraj Riazi had the honour of interviewing General (Ret’d) James E. Cartwright. General Cartwright, who is the current Harold Brown Chair in Defense Studies at the Center for Strategic and International Studies in Washington, D.C. Previously, General Cartwright served as commander of U.S. Strategic Command (2004-2007) before being nominated and appointed as the eighth vice chairman of the Joint Chiefs of Staff (2007-2011), the nation’s second-highest military officer.

Was there sufficient coordination between STRATCOM and the executive branch on matters pertaining to long term strategy when you served as commander?

The U.S government has a very formal process for coordinating military-political objectives. Ideally, the administration provides the commander with a set of objectives reflecting their conception of the national interest. That strategy is arrived at by the interaction of various cabinet agencies. There will be both a military component and diplomatic component, headed by the Department of State, that is used to build a national military strategy.

The results of this interaction then reach the National Security Council Deputies Committee (DC) and Principals Committee (PC). The individual components are examined in the context of the grand strategy and occasionally there is some tweaking on the margin. We found over the years that the national strategy very seldom changes significantly. Major events may occur but they rarely change our core interests in the world.

Sometimes providing this strategy takes longer than it should especially since any new administration is usually preoccupied with settling in and adjusting. A new administration is also confronted with individuals who have served ‘life time’ in some cabinets and have already begun formulating a strategy without receiving anything from the administration. This often results in cabinet level strategies superseding the national strategy. Ultimately, these differences are reconciled and which strategy supersedes the other becomes less important.

How does that process translate into the development and acquisition of programs or equipment by STRATCOM that are seen as vital to national objectives?

The Quadrennial Defense Review (QDR) is the document that translates strategy into objectives and capabilities. Those capabilities then justify activities associated with areas of risk. When the national interest determines a capability to be necessary, procuring it involves acquiring Congressional funding. Therefore, the strategy presented to Congress must identify the shortfall that exists in capabilities and provide an analysis in support of that identification so a clear lineage is established between the two. My position must have an analytic foundation, not be a mere gut feeling. There will be those in favour and those opposing it but only after working with Congress can one proceed with acquisition.

What role did alliances play in your considerations and what is the importance of NATO’s geography for American missile defence?

An alliance begins with a common belief in an imperative. From that results an accumulation of force and capability particularly in scale but also in value. The purpose of an alliance is to increase the buy in for defending the imperative. In democracy, alliances are accompanied with a liability deriving from a demographic reality that results in a portion of the population questioning the benefits of that alliance. That liability, however, is worth the risk.

Alliances are a very important part of how America provides for forward based radars necessary for its missile defence system. There are three steps that I have always preferred following when proposing to a base a forward based radar on the territory of another nation.

First, the issue must be framed as a common imperative between two nations or more nations. Systems that only provide unilateral protection which allies do not benefit from and may even suffer from do not interest them. Step two incentivizes the nation whose territory is necessary for deployment of a radar. This is done by offering another state access to information about a neighbour that represents a problem for them. Positioning radars on their territory then becomes a mean by which that state can also gain an advantage from the radar through acquiring prior knowledge of an adversary’s actions. Joint command over the launch of missiles is another incentive that can be arrived at through a separate agreement. The other approach entails a more forcible imposition of America’s own threat perception on a country, even if their perceptions do not match.

If that state is convinced it is in its interest as well to have a radar on its territory the next step becomes for that state to seek an agreement from its neighbours for a deployment on their territory as well. The state where the radars are deployed must also have allies that can serve as further forward deployed bases because geography is such that is impossible to provide that agreed upon protection from one states territory.

Following these steps are how a relationship like NATO can be build where countries must rely on each other because all the financial prowess in the world can not substitute for the defence provided by such a relationship. This is why I have also argued in favour of regional missile defence. It is only defensive and permits allies to acquire a form of protection that they also participate in. Missile defence will never be used to wage from the territory of the ally it is stationed in. Regional missile defence in a relationship like NATO should be compelled by more than the simple use of another state’s geography and terrain as a base for attacks on an adversary. The foundation would be a common imperative providing safety to the peoples of two or more nations. This would make it less politically sensitive as well.

Is the search you described above for ‘redundancy’ in missile defence systems sufficient to protect NATO member states?

Resilience and redundancy are always required. This must be balanced against the consideration of ‘how much is too much’. Too many people want missile defence to act as a shield and this often means advocating for building one interceptor per incoming missile. It does not take too many rounds to make your adversary question whether they can launch a pre-emptive strike. This is not what missile defence was designed to do.

Missile defense has no other purpose than to build decision time and opportunity for national leaders when assessing a situation and allowing them to assess that situation with sufficient intelligence. Making missile defence a Maginot line nobody can cross will never work and history shows that it has never worked no matter the technology. If a couple of days were required to assess the accuracy of incoming ISR and ascertain that an attack is taking place that also provides a couple of days to decide what one will retaliate with. This is huge because waking the President in the middle of the night to request permission to launch 300 ICBMs will be met with a request for more decision time.

What are your thoughts on the ABL (Airborne Laser) program?

The similarity between hypersonics and ABL is that both are scientifically experimental. The desired end result may not even be achieved with the program but it first needs to be built for one to ascertain that. This can be very cost in-efficient but it can also yield scientific knowledge that benefits other projects. For example, the reduction of excess weight and noise comes from the realization that a switch from chemical to digital lasers is necessary.

Although ABL is technically possible, America over the next 10 years must shift its investments away from chemical lasers toward solid state lasers. Even if one begins with targeting things such as RIB’s (Rigid Inflatable Boats) the consequent advantage you derive is incredible.

ABL is also disruptive in many categories. It allows for effect at great range. Since that range is always growing as a function of the speed of light, the likelihood of an adversary intercepting such an action is very low. The defensive reactions an adversary will be forced into in order to prevent this are significant. This imposes significant costs on an adversary while you retain a sustained advantage in this area because of actions taken to reduce the size of the magazine requirements on station time and so on.

Generally speaking, is there any set duration to the time required for the development of a new technology by one state to spread to other states? If so, how is this accounted for by national leaders?

It pretty closely follows Moore’s Law. When an adversary generates an unexpected capability I am forced to generate a counter capability. Our first line of response is to acquaint people with this technology and train them in tactics, techniques and procedures (TTP) because the most agile changes happen with people first. Being able to recognize what is coming has its own advantages.

Our second line of response is modification of a limited number of platforms and then proliferating them. An already existing aircraft would, for example, have a different weapon or sensor placed on it.

The third form a response can take is building an indigenous capability from scratch which is not only capable of detecting and avoiding the threat you are responding to, but is capable beyond that. Building such an indigenous capability usually takes somewhere between 24-36 months. This reduces the benefit an adversary derives from a new system and therefore this imposes cost again.

Finally, concluding with strategic culture, can you discuss the problem of reconciling waging war in a democracy and public support for war?

History will show that democracies are not good at sustained long wars. Four or five years is not considered too long a war but going beyond that time frame in a democracy creates a lot of questions as to why one is still engaged in a war. Even with a good cause it is difficult to sustain a long war in a democracy. Oligarchies are very different. When contemplating entering into a war, democracies try to ensure that the imperative is clear at all levels. Universal acceptance will not be attained but the imperative must be made clear because probably no more than 10% of the democracy is actually involved in the conflict. Most are living their daily lives and remain unconvinced that the imperative ever existed or still is what it once was. Starting a war without an imperative means serious problems.

The idea that democracies can not engage in sustained activities short of war is not as true because the Cold War is a classic example of the most successful global conflict not waged. It was, however, a developmental and manufacturing war and a conflict existed from a financial point of view but there was no loss of life. Waging a war without ‘shooting’ was potentially a harbinger of current conflicts where both kinetic, non kinetic, and hybrid war all exist as forms of conflict.