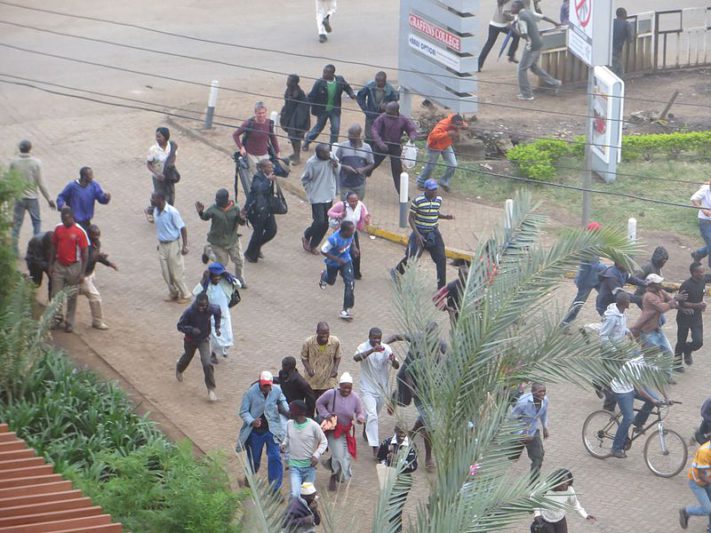 My Son the Jihadi is a short documentary about Thomas Evans, a UK born man who travelled to Somalia to fight for Al Shabaab in 2011 at the age of 21. The film focuses heavily on the tremendous grief that the Evans family faced when they lost their son and brother to the Al Qaeda affiliated terrorist group. The film also discusses the route that took Thomas from his secular childhood to peacefully practicing the Muslim faith at 19 to violent Islamist extremism by 21. The scariest part of this film is that Thomas Evans’ story is not unique. To date, at least 850 UK citizens are known to have entered Syria or Iraq at some point to join jihadist organizations, another 600 have been caught trying to do the same.

The film begins with real footage of Thomas Evans, by this time known as Abdul Hakim, shouting and embracing with a group of Al Shabaab fighters. The film then cuts back to Thomas’ mom Sally at the beginning of the nine-month period over which the documentary was filmed. Sally goes through her home, pointing out all of the childhood photos and drawings that indicate what she deemed a “normal” childhood.

If he died, in one way I suppose…Oh God forgive me, it would be easier because then I’d know that he couldn’t hurt anybody else. But no it wouldn’t be easy because my son would be gone. But then I guess my son has gone anyway. – Sally Evans

Thomas calls home from time to time to speak to his family, often preaching his radical views. At the age of 19 Thomas converted to Islam, but he did not begin exploring radical Islam until he was 20.

When Thomas and his brother Michael were in their early teens, their father left for his secret second family, cutting off all communication with Sally and the boys. Michael believes that Thomas was looking for a new family, and when he became a Muslim he found one. Initially Thomas’ conversion seemed to have a positive effect on him, and it was not until he changed to a new mosque, The Muslim Education Centre, that his beliefs became extreme. This mosque had been connected to the extremists behind the 2006 liquid bomb plot, though mosque authorities denied any involvement in radicalization.

Mike Jervis, a de-radicalization expert from the Muslim charity, Active Change Foundation, meets with Sally to map out how Thomas was recruited. Jervis is looking for ‘vulnerability factors’. First he looks for an event that may have affected both brothers. Jervis believes this is the break up of their parents’ marriage. Next Jervis looks for an event that affected just Thomas; Sally believes this was a hard break-up that Thomas went through. Jervis says that now Thomas is in a “searching” phase, which is when he found his first mosque. Jervis believes it was someone in the mosque that then recruited Thomas towards radicalization, not the mosque itself. Next, Jervis is looking for a third vulnerability factor, such as employment or social scenarios that may have made Thomas susceptible to a recruiter. Sally says that when Thomas became a Muslim he grew a beard, and because of discrimination he lost his job. She also believes his change in attitude was a factor in his job loss. Almost immediately afterwards, someone from his mosque got him a new job.

At this point, Sally says that Thomas became very secretive and so not a lot is known about the process through which he was radicalized; however the company Thomas began working for was linked to radicals that are now high-ranking members of ISIS.

In December 2014, Thomas called home to tell his mother he had married a girl of 13 or 14 years old named Suda.

4 years and 4 days after he left home, Thomas is dead. He was one of the eleven Al Shabaab fighters killed while attempting to attack a Kenyan army camp. Thomas was holding the camera, recording the attack, until the moment he was shot.

Thomas Evans’ story is not unique, nor is it particularly extreme. Family issues and bad break-ups usually don’t predispose someone to violent extremism; most people would probably agree that these are just regular parts of life. The Youth Justice Board in London, England, conducted an extensive meta-synthesis of data about violent radicalization, and the conclusions were hardly informative. Through the abundance of research completed on this topic, no single biological, sociological, or psychological explanation for radicalization is available. Political grievance was the only prominent risk factor.

Some research indicates people in marginalized populations or alienated youth are more likely to be attracted to extremism, but Thomas was neither. Other research indicates that extremists often develop ideologies based on their own personal grievances, and then use the most radical branches of religion to give their grievances direction. Perhaps, as Mike Jervis suggested, it was personal experiences that made Thomas vulnerable to radical Islam. Several bodies of work suggest that preemptively educating youth about traditional Islamic beliefs could prevent them from adopting radical views not shared by the majority of the Muslim population. Religious education is now a key part of the UK anti-radicalization strategy, Prevent. It is impossible to know now whether or not education could have saved Thomas.

This documentary has an important message: radicalization does not discriminate. Thomas was not brought up in any religion; he did not have familial ties to a terror cell or extremist organization. Thomas was loved by his family and his friends, and did not live in a marginalized society. Thomas had a job as an electrician and a safe place to call home. No one thing happened to radicalize Thomas, rather several small things happened that made Thomas vulnerable to the people that were in the right place at the right time waiting for him.

Photo: Taken of and around the 2013 Westgate shopping mall terrorist incident in Nairobi, Kenya. (2013), by Anne Knight via Wikimedia Commons. Licensed under CC 3.0.