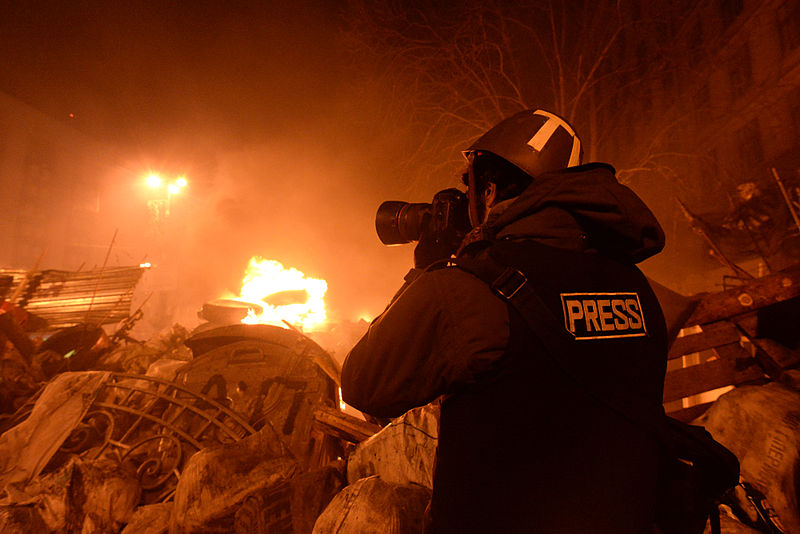 What are the current threats targeting journalists and media professionals?

Armed conflicts inevitably place overseas journalists in regions of immense danger and political instability. The frequency with which news broadcasters report cases of journalists either imprisoned, killed, held hostage, or violently assaulted raises the question of how overseas journalists are being protected?

Reporters Without Borders (RSF); an independent NGO based in Paris is recognizably one of the leading organizations promoting and defending freedom of expression. Contemporary global data released by RSF reported 47 journalists killed and 145 imprisoned. The Committee to Protect Journalists (CPJ) identifies the following as some of the main threats targeting journalists in the field. Potential threats include, but are not limited to: imprisonment, violence, destruction of acquired information, violence, battlefield hazards, terrorist threats, border crossings, surveillance and natural hazards.

Active combatants rigorously seek to prevent journalists from acquiring information relevant to human rights abuses, war tactics, government corruption, or other information deemed confidential from becoming accessible to media sources and to the general public. The rapid development of media and information technology has resulted in the effortless accessibility of information worldwide. The digital era and the pursuit of information in nations with extremely strict media censorship has raised significant concerns regarding the security and safety of information acquired and published by journalists.

What protection do journalists and media professionals have?

In September 2014, Article 19 underwent a resolution on the safety of journalists supported by over 90 sponsoring states. Resolution A/HRC/27/L.7 released by the HRC General Assembly, acknowledged, recognized and reaffirmed the ongoing threats targeting journalists. The critical and most important aspects of the resolution can be noted in the fifth amendment which called upon states to “develop and implement strategies for combating impunity for attacks and violence against journalists.”

The amendment encouraged states to establish mechanisms for gathering information such as databases to safely permit the accumulation of verified information. The amendment also called upon states to create early warning, rapid response units in order to provide journalists immediate access to security and safety personnel when threatened.

The International Committee of the Red Cross (ICRC) discusses how the Geneva Conventions and International Humanitarian Law outline comprehensive legislation and protocols applying to both journalists and civilians in armed conflicts. According to the ICRC, the insufficient protection of overseas journalists is not a result of inadequate legislation, but rather the ineffective implementation of existing legislation and violator accountability.

What does the newly developed resolution mean for journalists?

September 29, 2016, marked what was described as a groundbreaking resolution in the development of safety protocols for overseas journalists. The resolution adopted by the United Nations Human Rights Council (UNHRC) encourages all states to release journalists that have been arbitrarily detained, reform any existing obstructing laws which interfere with a journalist’s field work and encourages states to not interfere with a journalist’s use of encryption and security methods permitting anonymity.

Participation from all states is required to ensure the effective implementation of policies and procedures to protect journalists. The Committee to Protect Journalists (CPJ) supports this newly developed amendment outlined by the United Nations. As recognized by the CPJ, security threats for overseas journalists are both widespread and differ in terms of the type of risks targeting journalists.

New resolutions can be effective in protecting overseas journalists from potential, and expected risks. A major impediment in establishing the safety of journalists is the lack of effective implementation of policies and procedures which are able to provide effective assistance to journalists exposed to some of the world’s most dangerous and unstable regions.

It is important to recognize that countries experiencing armed conflicts, terrorism, or the rise of insurgents often have extremely strict legislation and censorship regulations regarding freedom of expression. Many countries do not support the United Nations and other organizations promoting individual human rights through freedom of expression. Resolutions to protect the rights and safety of overseas journalists must take into account the regions they are being implemented in and must include effective, rapid response security procedures.