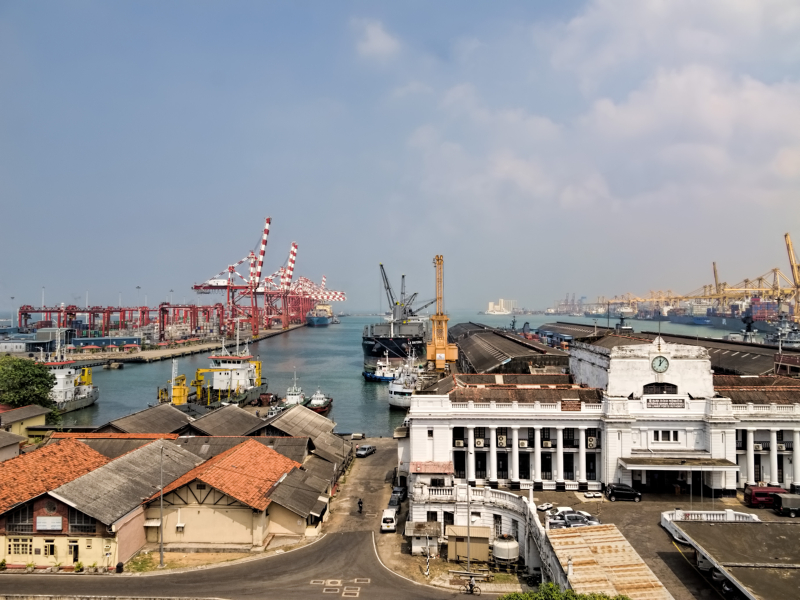 Sri Lanka is currently the geopolitical fulcrum between the East and the West. Dominant states in their respective regions have utilized foreign direct investment as a tool of soft power to assert influence in Sri Lanka. Investor states have funded development initiatives, believing the compounded interest of good will, will pay strategic dividends for securing trade ports and military outposts in the future.

In April 2018, the China Communication Construction Company announced that it will invest $800 million to build an underground road network to Sri Lanka’s Port City, Colombo.  The $1.4 billion project to be built on reclaimed land, will provide the necessary infrastructure for China’s One Belt, One Road initiative. The project is expected to attract $13 billion in investment over the next 20 years.

The underground infrastructure project is in addition to the 99-year lease of the strategic port in Hambantota that China secured at the end of 2017. The Sri Lankan government sold an 80 percent stake in the port to a state-owned company after failing to repay the $1.5 billion borrowed from Beijing for its construction.

India, considered a rival with China, has reacted to the deal with suspicion, prompting Sri Lankan officials to offer assurances the port will not be used by the Chinese military. India remains cautious of the One Belt, One Road initiative as the initiative includes the China-Pakistan Economic Corridor that goes through Pakistan occupied Kashmir, and China has not provided assurances that India’s sovereignty will be respected. India has attempted to balance the influence of China by investing in Sri Lanka’s first liquefied natural gas project and aligning itself with regional power, Japan and global hegemon, the United States.

Japan has signed a Memorandum of Understanding to build a Floating Storage Regasification Unit (FSRU) in the port of Colombo. The FSRU and LNG terminal project will be a joint venture by the Sri Lanka Ports Authority, Japan and India.

Looking to stem the influence of China in the region, the US has supported initiatives by India and Japan while also investing themselves in long-term development programs. The U.S. Ambassador Atul Keshap announced in October 2017 a $1.8 billion rupee program funded by the United States Agency for International Development (USAID) to support youth employability, vocational skills development, and entrepreneurship. USAID and a coalition of partners from the Government of Sri Lanka, the private sector, non-profit organizations, and academic institutions will collaborate over the next four-years to help young Sri Lankans become more competitive in the labour market.

The large investment is a departure from the isolationist rhetoric and previous ‘America First’ foreign policy directives that saw the US withdraw from the Trans-Pacific Partnership and Paris Climate Agreement, threaten trade wars, increase tariffs and restrict immigration. In contrast, China has been praised for its championing of globalization and environmentalism; most notably establishing the Asian Infrastructure Investment Bank which has expanded China’s reach to 70 member states, spanning from East Asia to Western Europe.

China is attempting to step into the soft power vacuum left by the US, with President Xi Jinping announcing at  the governing party’s national congress, “We will improve our capacity for engaging in international communication so as to tell China’s stories well, present a true, multi-dimensional and panoramic view of China, and enhance our country’s soft power.”

The USAID youth investment program appears to counter the soft power advance of China in Sri Lanka. The US can now monitor the economic advance of the One Belt, One Road initiative and hold Sri Lanka accountable to their promises that the port will not become a Chinese military outpost. The latter is important, as it would place a Chinese base in the middle of several US posts in Japan, Australia, South Korea and the British Indian Ocean Territory. The program is also an important return to fostering soft power relationships in the region, after the US dropped on the Soft Power Index in 2017.

The US should regain a soft power foothold in the region by pursuing a human rights agenda in Sri Lanka and support transparent investigations and adjudications of war crimes in country.

Sri Lankan government forces stand accused of widespread human rights violations in the final stages of the civil war that saw approximately 40,000 Tamil civilians killed in the final of weeks of the conflict that concluded in May 2009.

In March 2017 the UN Human Rights Council voted to investigate war crimes in Sri Lanka, and publish their findings June 2018. Sri Lanka’s new government recently won a six-month delay, with the expert led UN inquiry now set to publish its findings in September. The reprieve was awarded after the new government provided clear commitments that it was prepared to cooperate “on a whole range of important human rights issues.”

Despite promises, on May 11 the Sri Lankan Army established a Directorate of Overseas Operations that will prepare and collect relevant materials to defend against war crime charges. Army Commander Lt. Gen. Mahesh Senanayake stated that he is not opposed to any inquiry into alleged war crimes but that he and the army are committed to clear the institution’s name.

This offers an opportunity for the US to hold Sri Lanka accountable and invest in the reconciliation of the country along with providing opportunities for the next generation. Coordinated efforts with India and Japan provide a strong counterbalance to China, and the pursuit of a human rights campaign will bring a renewed legitimacy to the Trump Administration which has been admonished for their denial of human rights both at home and abroad.

The US should build on the peaceful perception it has garnered through its efforts in the Korean conflict, and invest in Sri Lanka’s future generations. The US should renew its commitment to soft power diplomacy and aim to be recognized in the region as the country that provides both opportunity and healing for sustainable prosperity in Asia.

Photo: The Port of Colombo which is set to receive $800 million in infrastructure development from the China Communication Construction Company. Licensed under CC BY-SA 2.0.

Taylor currently attends the Maxwell School of Citizenship and Public Affairs and the Syracuse College of Law where she is completing an MA in International Relations and JD specializing in Counterterrorism Law. At the College of Law she is the RA for the Chief Prosecutor of the Special Court for Sierra Leone, David Crane. Taylor has supported several consulting projects for foreign governments, most recently providing a briefing to the Emir of Qatar on the Yemen conflict. She is also contributing to a forthcoming textbook on biometric law and policy. Regarding legal practice, she has represented torture victims from Turkey, Tanzania, Kenya, and Egypt with the World Organization Against Torture in Brussels. This added to her previous policy experience with the UN, Canadian Department of National Defence and the US State Department. Outside of school Taylor is a student athlete who utilizes sport as a development and peace building tool. Most notably she served as the first female hockey coach in Serbian history, helping to establish a national female hockey program in the country. She can be contacted at: t16lambert@gmail.com View all posts by Taylor Lambert →